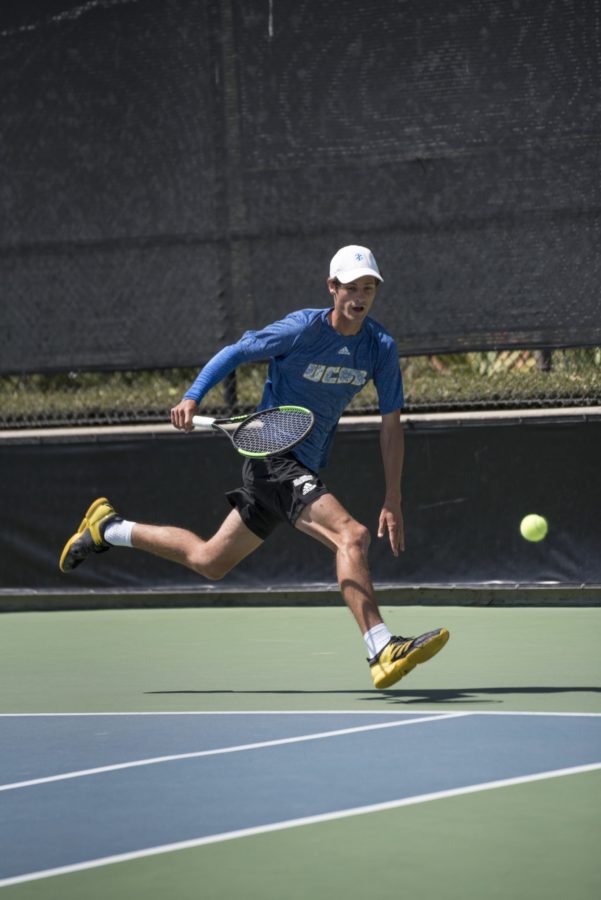 In a heated match on Saturday, the UC Santa Barbara men’s tennis team secured their second win of the season, beating the previously undefeated Loyola Marymount 4-3 on their home court. However, the tables turned, and the streak was lost after the team suffered a 4-3 loss to Pepperdine, who came out of the match with a spotless record. These two games marked their fifth and sixth games on the road since the start of the dual-meet season, and the Gauchos’ rocky 2-4 record seems to reflect that.

Named Big West Men’s Tennis Athlete of the Week in the days leading up to the weekend’s matches, it seems only right to shout out sophomore Alejandro Vedri for his consistent dominance so far this season. The accolade recognized Vedri’s winning records in singles and doubles competitions. With the exception of UCSB’s scoreless loss to Oregon, the Spaniard has steadily contributed at least 1 point per match, both alone and with doubles partner Joseph Guillin.

Saturday was no different. Vedri left the match against LMU unscathed, going undefeated in singles and doubles competitions. His solo win was the sixth and last of the singles for the day. His energy carried into the doubles sector, where he and Guillin tallied the team’s only point versus LMU’s Ethan Prost and Mayo Keenan with a 6-3 win on court two. However, Vedri’s victory ride was cut short on Sunday, as the sophomore slipped to his competitor in the first singles match of the day.

Freshman Joshua Williams played like a vet in Saturday’s opening match, comfortably delivering a two-set 6-1, 6-2 victory, proving his ability to compete at the collegiate level; the next day, he was swiped by a fellow rookie. Junior Victor Krustev followed suit.

Losing four of their six singles matches on Sunday, the Gauchos saw a small and unwelcome crack in their gameplay — one which had definitely not been present the day prior when they slammed four close-to-consecutive singles wins to ensure their overall victory.

But alas, the Pepperdine game was not all dim and weary. On Sunday, the Gauchos finally saw two solid performances on the doubles courts, a sweet relief from what’s been an otherwise frustrating pattern of the 2020 season.

The most striking one came from Krustev and fellow junior Joseph Rotheram. The 6-2 victory on the first court was a long-awaited one, especially after losing on Saturday in a tie-breaker set which finished at 6-7, and we can only hope that this is just the beginning of something good for the Gauchos. The strong Guillin-Vedri pairing beat their Pepperdine opponents with an identical score directly after.

In a perfect world, UCSB would be able to finally put these pieces together and rev up what has been such a slow start to the new decade; this upcoming week could be that perfect opportunity. In the presence of a local crowd and the comfort of their own court, the men’s tennis team will hopefully capitalize on their first at-home game this season and continue to redirect their path when they take on Fresno State on Thursday.