On Sunday, about 300 people filed into the Fleischmann Auditorium at the Santa Barbara Museum of Natural History in attendance of a public conversation regarding the aftermath of the Thomas Fire in December 2017 and January 2018, and the Montecito mudflows which ensued following a deluge of rain which extinguished the fires on Jan. 8, 2018. 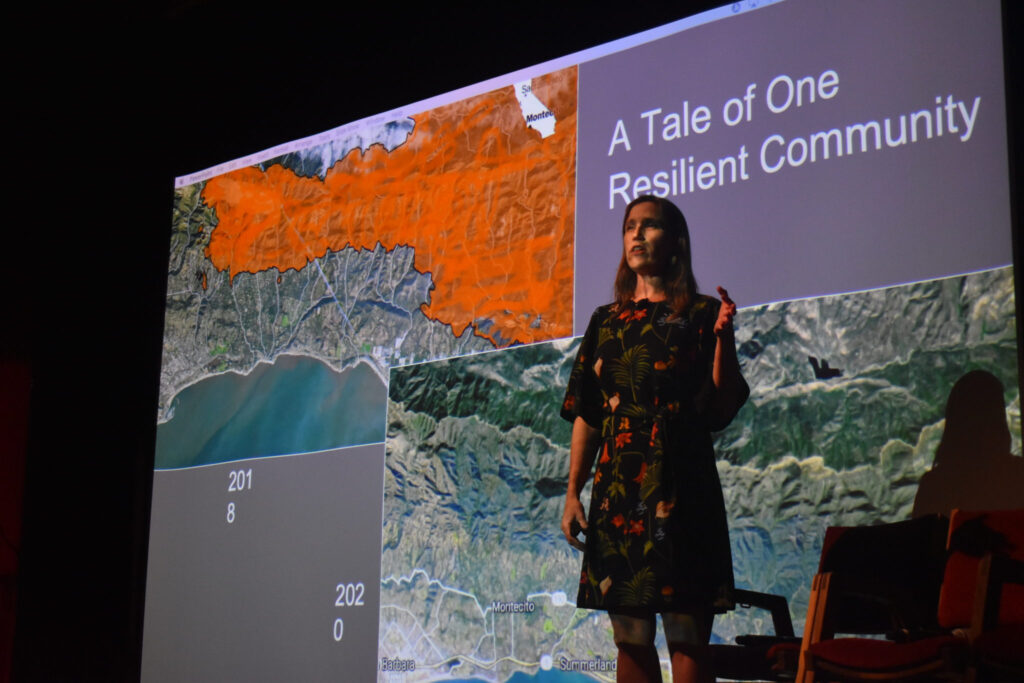 In December 2017, severe dry conditions coupled with strong Santa Ana winds gave birth to an insatiable firestorm which spread and engulfed the southeastern bounds of Los Padres National Forest. The Thomas Fire burned 281,893 acres and at the time grew into the largest wildfire in California history — later surpassed by the Ranch Fire in 2018.

Then came the first significant precipitation of the season. Four inches of rain fell in a single, torrential storm, thoroughly extinguishing the fires and resulting in cataclysmic debris flows, responsible for 23 deaths.

The speakers who attended included Sarah Anderson, an associate professor of environmental politics in the Bren School of Environmental Science & Management; Andrew Brooks, the project scientist with the UC Natural Reserve System monitoring the Carpinteria Salt Marsh Reserve and Steven Gaines, the dean of the Bren School.

Particular focus was given to the progress in healing the areas around the debris flows over the past two years, with both promising signs of recovery as well as sobering realities regarding the damage to infrastructure and the natural environment which continues to persist today.

Brooks delved into the impacts that the mudflows had on the wetlands and salt marshes straddling the coast. Nearly 20,000 dumpsters’ worth of debris flowed downstream from the burn scars and inundated the Carpinteria Salt Marshes. If put end to end in a single line, they would have stretched for 22 miles, according to Brooks.

Coupled with the fact that the salt marsh is a biodiversity hotspot of the South Coast with 250 plant species, 200 bird species and 150 marine fish species, the extensive damage to it particularly stings.

“Well, first, there was quite a bit of habitat loss. Oysters, crabs, shrimp, clams, they were completely buried and suffocated by the large amounts of sediment that now choke these channels. The loss of those species causes disruptions to the marsh food web, as many of the species that were lost are important food items for other species,” Brooks said.

“There was [also] actually the introduction of a number of toxic compounds associated with the burned chaparral material that washed into the marsh,” he continued. “We were faced with sort of an existential question … What do we do? Do we clean everything up and try to restore the marsh back to its pre-reflow conditions? Or do we step back, monitor the conditions and work out how the systems respond?” 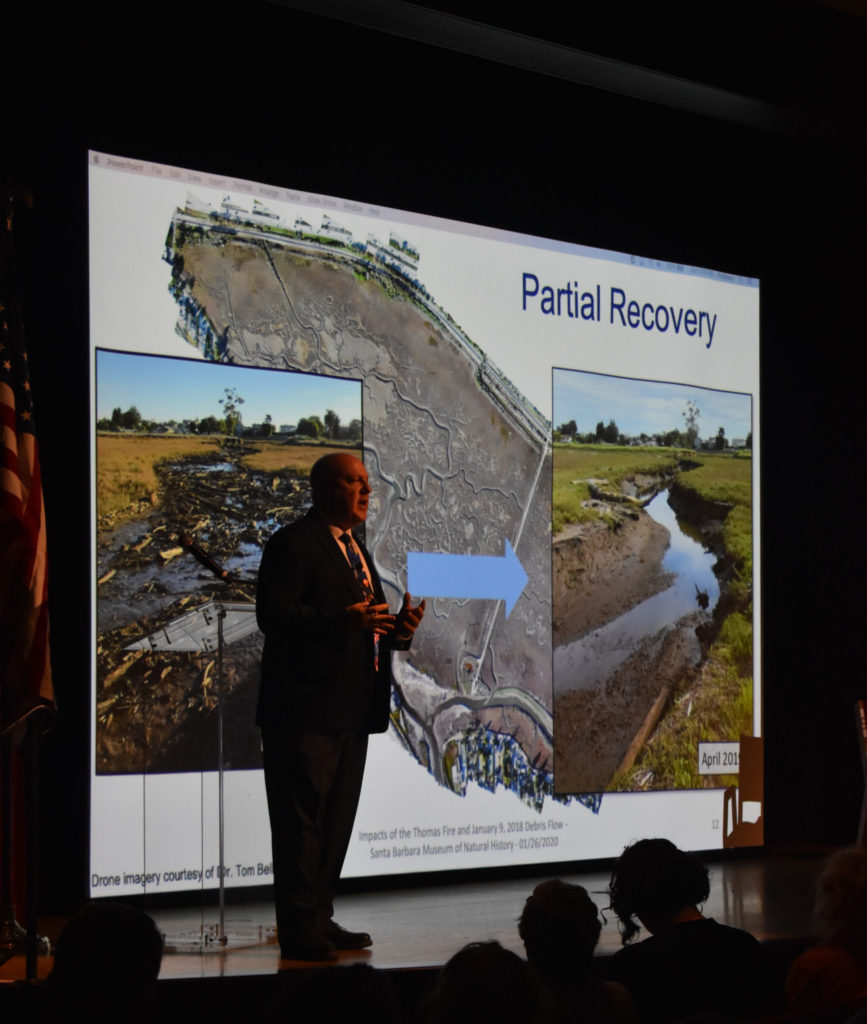 Brooks found many things promising, guiding the audience through photos of wetlands in recovery, making note of how the streams and tides have guided the rejuvenation of the land.

However, Brooks was quick to qualify that although widespread recovery has occurred, much of the wetlands are still severely degraded, and stressed that moving forward, the preservation of existing wetlands and the prevention of further habitat fragmentation will be necessary to ensure the resilience and vitality of the marsh.

“We need to maintain the connectedness between those wetlands. A lot of the species that were extirpated by the debris flow [and the wetlands] are going to be colonized by individuals and species that are found in other marshes up and down the coast,” Brooks said.

“If those marshes go away, we no longer have a source for those species to be colonized from.”

Brandon Steets, a senior principal engineer with Geosyntec Consultants, discussed the microbial impacts on coastal water quality that the fires, subsequent debris flows and dumping had in the Santa Barbara Channel.

Goleta Beach, closed to beachgoers for six months following the debris flows and the dumping of debris onto the beach, which was carried out afterward, showed elevated levels of surfzone bacteria throughout sampling. However, in the months during the closure, the decline in bacteria levels continued steadfastly and improved below state standards in July, a benchmark which was met earlier than expected.

Geosyntec Consultants, the engineering firm hired to evaluate the surfzone off of Goleta Beach following debris dumping, had three questions to answer in its continuous testing of the water for bacteria and human markers.

“First, is it the sand on the beach that’s causing what’s happening in the water? … Second, what is the spatial extent of the elevated bacteria? … And third, is human waste present? This is the most important question because if human waste is present, then the gastrointestinal illness risk to those exposed [to the water] is going to be higher,” Steets said.

“The state standards are predicated on the assumption that human waste is present. If it’s not present, that illness’s risks are much lower than you would think based on that bacteria’s magnitude.”

Steets and his team found that the elevated levels of bacteria were highest at the disposal area. These levels fell in samples obtained at sites further away from the disposal area. Furthermore, it was confirmed that elevated bacteria found in the surfzone was coming from bacteria in the sand and sediment.

In looking at the human marker results, Geosyntec Consultants concluded that “there was no evidence of human waste in surfzone water, and therefore no evidence of an elevated human risk.”

For the future, Steets recommends that disposal activities should be surveilled in the same way, with an emphasis on “monitoring indicator bacteria, human DNA marker and potentially pathogens in the raw material and the surf zone during and after disposal.” 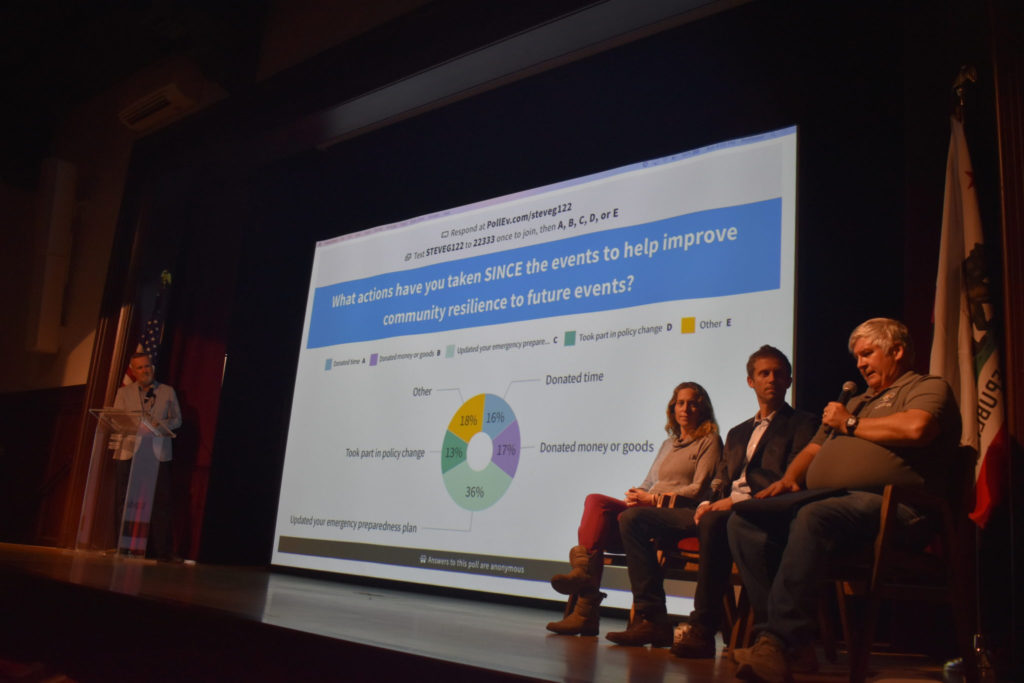 In describing impacts to people, Anderson described a number of ways in which residents of Santa Barbara had responded more effectively to difficulties associated with the fire and subsequent mudflows than other communities had done in the wake of similar natural disasters.

“I was worried about [after the fire] because my research has shown that as time passes, the degree to which you’re paying attention to [risk] falls off. And at the same time — in the case of wildfires — that risk is actually increasing as vegetation grows.”

Anderson pointed to a risk-curve graph with two lines moving opposite one another, one declining and one increasing, demonstrating the decline in salience as time after a natural disaster grows longer.

“There’s a mismatch between our attention and what’s going on and in the national system. [We] looked across the western United States. Imagine one city that didn’t have [a] wildfire, and a second city that had had a wildfire. We found that in the second city, the city that had a wildfire was actually more likely to get government [aid for fire prevention]. And if you think about it, that city actually probably has lower fire risk,” Anderson stated.

It was found that a significant — and sometimes overwhelming — majority of participants managed to answer the question correctly.

However, there was another explanation for Santa Barbara’s reduced wildfire risk in addition to knowledge. Wealth and privilege were also statistically significant variables.

“If we go back to these two communities … I told you that the one that has a wildfire is more likely to have gotten government funds. And it turns out that with whiter, wealthier or more educated communities that gap is even bigger. So there’s also a story here about inequality,” Anderson said.

Perhaps given that — as Anderson suggests — it would be wise to use Santa Barbara’s resources to aid in the recovery of other surrounding communities.

A survey conducted during the final minutes of the discussion before the floor was opened for questions, asked the attendees to describe Santa Barbara in one word. The safer “resilient” only won the second place spot. “Resilient,” in fact, was sandwiched between two different, more complicated distinctions: “affluent” and “entitled.”

“We’re surrounded by communities who share our wildfire and debris flow risks, and I think it’s imperative that we share our story so that those communities can learn from what we’ve done,” Anderson said.