This past December, UC Santa Cruz graduate students decided to go on a “wildcat strike,” or work stoppage. This “occurs during the term of a collective bargaining agreement without the approval of union leadership and in violation of a no-strike clause.” In doing this, they decided not to submit fall quarter grades because the university would not meet with them to discuss their demands for a cost-of-living adjustment, or COLA. Currently, they are asking for a COLA of $1,412 per month to help alleviate rent burden, which is defined as spending more than 30% of one’s income for rent. At the moment, the students’ contract only offers a 3% increase to support the cost of living — many say this is not enough. 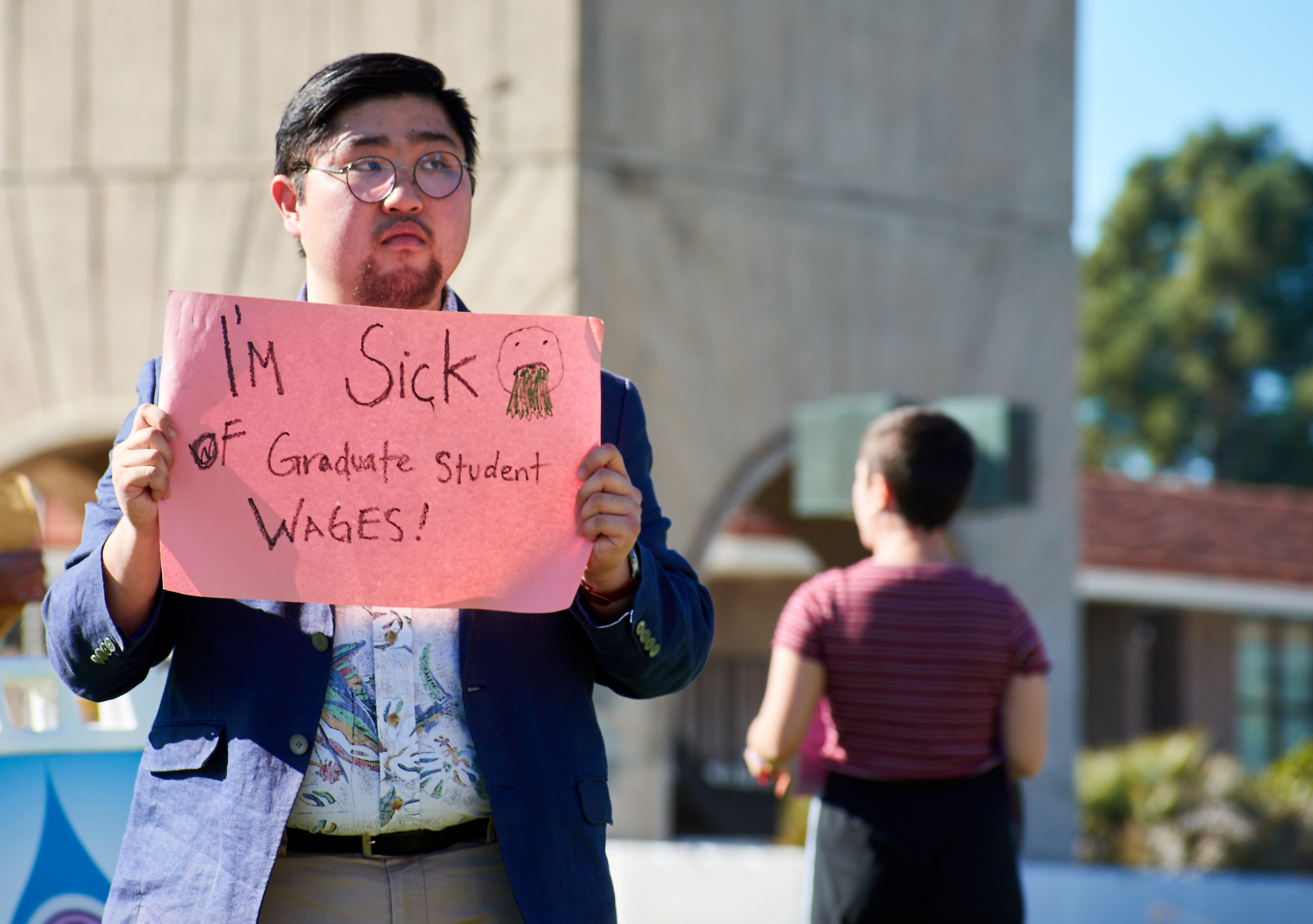 I strongly support the UC Santa Cruz graduate students because even though they make a similar amount as other graduate students at other UC campuses, the cost of living is more expensive than in some areas of the state, causing them to live in terrible conditions. It also affects undergraduate students and, so far, the university has taken steps to avoid addressing the demands.

Graduate students are simply not being paid enough for the amount of work they contribute to the school. Overall, at 50% appointment, they can be assigned a workload of 220 hours per quarter. Depending on the instructor and course, they can be asked to do a lot of the grading for undergraduate classes and interfacing with students and contribute valuable research. Currently, for 50% appointment at UC Santa Cruz, TAs are paid $2,434 monthly and $21,906 annually. More than 50% of this income goes to their housing after taxes. For 50% appointment, TAs at UC Davis, UC San Diego, UC Irvine, UC Los Angeles and here at UC Santa Barbara earn around the same amount monthly and yearly.

Undergraduates and graduates should support one another if they hope to gain the university’s cooperation.

Moreover, at different UC campuses, rent burden causes graduate students to subject themselves to horrible housing conditions. At UCSC, an anonymous graduate student detailed their living situation, saying, “In my previous home I was subject to 5 years of stachybotrys poisoning due to a criminally negligent landlord and having no affordable alternatives. I go into debt every month while skipping meals and going to the OPERS food pantry three times a week despite being in the 2nd highest tier of pay among graduate students.”

Here at UCSB, graduate students who were interviewed at last Wednesday’s “sick-out” spoke about how some of their coworkers are homeless, working multiple jobs and having difficulty finding job opportunities in the summer.

I interviewed an international graduate student who works as a TA. The student talked about how rent burden has affected her life, mentioning a difficult time with a landlord who wanted to move back into the house. “My roommates who are not international students had a little bit more to work with … I had to say, no guys, sorry I can’t because that little bit extra you’re willing to stretch is impossible for me.”

These issues affect undergraduate students as well. Rent burden impacts how effectively graduate students can do their jobs when they are worried about their own well-being. It is safe to assume that they are not going to worry about grading someone’s paper when they are worried about eating and sleeping. As such, undergraduates may not be receiving the education for which they paid.

Undergraduates and graduates should support one another if they hope to gain the university’s cooperation. Currently, UCSC has not done anything to lift the burden off of students. The administration has expressed that it cannot address a wage increase because they are legally prohibited from negotiating and because the students have to go through the proper channels to negotiate with their union representative and United Auto Workers (UAW 2865), the union they are contracted under. It has also stated that it will not meet with students because work stoppage is illegal and violates their contract.

With low pay, high cost of living and terrible housing conditions, it can be hard for graduate students to do their job as effectively as they would like.

In response to this refusal to negotiate, the UCSC Graduate Student Association stated that “there is nothing in state or federal labor law that prevents an employer from meeting with workers in an effort to resolve a dispute while workers are in contract even if these workers are engaging in a wildcat work stoppage.” Sarah Mason, a former unit chair for their campus union said, “There is nothing in labor law that prevents an employer and a union from voluntarily agreeing to reopen contracts.”

Veronica Hamilton, a UCSC UAW 2865 unit chair, has formally requested to meet to discuss COLA. This clearly shows that the university is not worried about the legal aspects of negotiating with students — it is just not willing to meet because it does not want to.

In order to counteract the graduate students, the university has tried to get lecturers to confiscate exam materials in situations in which they would ordinarily be collected and graded by graduate students to circumvent the non-grading of assignments. The university has also told undergraduate students that the withheld work would result in “potential disqualification, being unable to enroll in classes that require a prerequisite taken this quarter, and delays in financial aid and graduation.” However, multiple steps have been taken to protect undergraduates. Since UCSC will not cooperate, a poll has determined that the GSA will potentially withhold winter quarter grades, with 83% of students supporting the hold of final grades and 50% supporting holding all the grades.

With low pay, high cost of living and terrible housing conditions, it can be hard for graduate students to do their job as effectively as they would like. It is important that undergraduates and graduates remain informed about the previously mentioned issues as the strike moves forward. These issues affect everyone on campus, and the only way change can occur is if students do their due diligence and offer their support.

TAs aren’t paid 21,000 annually. The value they get out of grad school amounts to hundreds of thousands of dollars, if they play their cards right. If you don’t want to take out loans or live in shitty conditions, either don’t go to graduate school or don’t go to graduate school in freaking Caoifornia. Seriously. People want to get degrees from the best schools, with the nicest weather and wonder why shit’s expensive? Grad students got what they agreed to, and now they’re potentially screwing undergrads and making their lives worse.

One of the primary demands is that we get a COLA WITHOUT RAISING UNDERGRADUATE TUITION. We don’t want to “screw you over.” Take some of the energy you pour into your vitriol and use it to educate yourself before spouting off falsehoods. We care about the undergrads a great deal. But you’re right, no one becomes a grad student for the money. We know that when applying. But if we’re going to do the work of teaching undergrads, is it so much to ask that I dont have to look in my bank account and decide if I can have… Read more »

Ahh, yes, If you want to be paid enough to survive in graduate school, don’t do it in the richest nation in the world, go to Croatia. We are truly a beacon of hope across the globe.

There is such a thing as nuance. Some UC graduate students are financially abused. Granted. Many (e.g., the sciences) are given their pay for performing TA ships — which for many amount to sitting in the assigned class, preparing tests, overseeing scantrons/parscores and holding 2 hours of office hours per week. And that nets them their pay (in the amount, depending on situation [e.g., scholarships, school] 16,000+ per year.

Redress the wrongs. But certainly one size fits all is discriminatory (and ill considered). I would have liked to think graduate level entry entailed greater demonstration of clarity of thought.

The work of grad students as TAs is in EXCESS of their degree requirement- their hours worked as a TA do not count towards their degree. So TAs have to take a full schedule of classes and conduct their own research in fulfillment of their degree in ADDITION to working as TAs. The issue is that they are being severely underpaid to do an essential, highly skilled, and stressful job for the university. The university literally could not function without the labor of grad students. They are the ones interfacing the most with students, grading their papers, answering emails from… Read more »

Nuance. It completely depends on the department. In my department TAs get nearly 20K for about 5-10 hrs of TA “duties” per week. Is that excessive? Well, for these folk it seems more than fair. Understood that many Universities pay stipends and doll out non-work related $$ to attract students. Fine. If that is what floats your boat, go where the bucks are. But please, let’s be critical thinkers and acknowledge that “one size does not fit all” and that ” the stipulation that “the university cannot function without us” is is gross conflation of the current status with the… Read more »