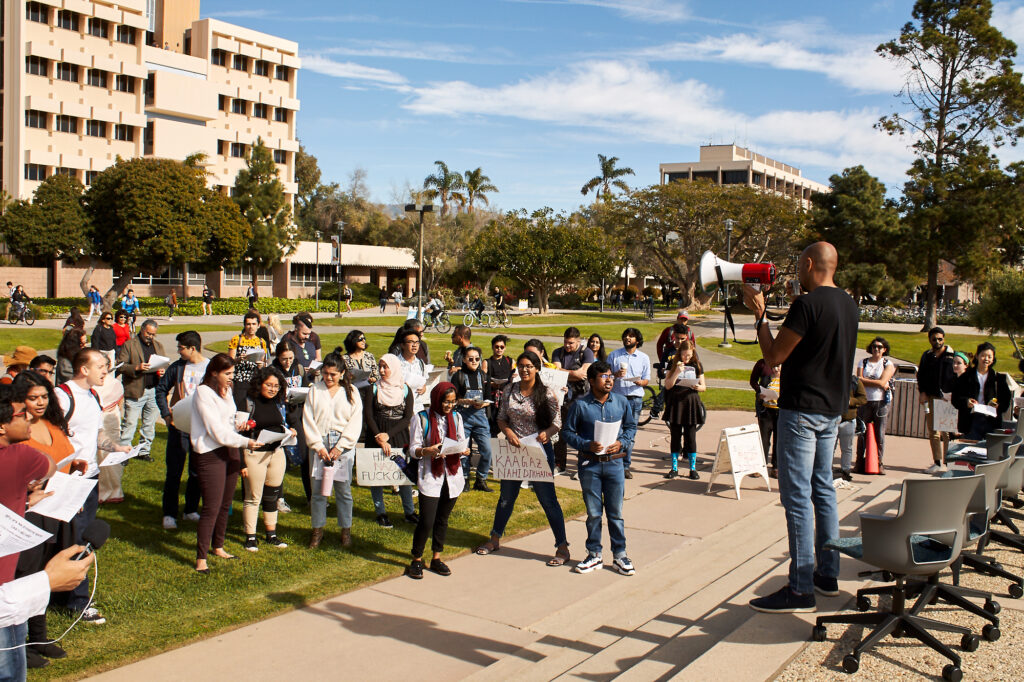 Several speakers drew parallels between the situation in India and authoritarianism across the world. Kaiyi Yang / Daily Nexus

Speakers and organizers spoke out against some of the Indian government’s practices, such as the lockdown of the region of Kashmir, the implementation of the National Register of Citizens (NRC), the Citizenship Amendment Act (CAA) and violence against people protesting these acts, actions which they deemed representative of “state-sponsored facism,” according to the event’s Facebook page.

The event drew over 100 attendees and featured chants led by graduate student and organizer Pratik Raghu, speeches from students and faculty members, a recitation of a revolutionary Urdu poem by organizer and first-year graduate student Tannishtha Bhattacharjee and a strategizing session to discuss ways in which people can support the protests in India.

At the teach-in, third-year College of Creative Studies biology major and speaker Salman Sadakkadulla from the UCSB Muslim Student Association criticized the process required to prove citizenship under the NRC, which declared 1.9 million applicants from the northeastern state of Assam — many of whom are Muslims and Bengali Hindus — to be stateless.

“Imagine waking up tomorrow, in I.V.,” Sadakkadulla said. “Imagine waking up without carrying your wallet. Imagine being stopped by [the] I.V. Foot Patrol and being asked to show your birth certificate. You don’t have that? Well, do you have your Social Security card? No? Well, if you don’t have that, do you have your driver’s license? No, you forgot it.”

Participants also handed out informational documents, stating that the CAA, which passed in December 2019, “when combined with the NRC, could lead to Indian Muslims, transgender people, adivasis, poor people, dalits, women, those not having land — everyone without documents — being declared stateless.”

Opponents to the act argue that it does not give eligibility to Muslims nor religious minorities from all countries that neighbor India, such as Rohingya Muslims from Burma and Christian Tamils from Sri Lanka, according to the Economic Times.

“The United States of America and Trump and Modi are constantly built on their politics of illegal immigration,” Pujita said. “Words like ‘border patrol,’ ‘detention camps,’ ‘the wall’ — these words that move around here are similar concepts and similar words that are being mobilized [in India] as well.”

One of the chants from the teach-in elaborated on that comparison: “From Assam to El Paso, detention camps have got to go.”

Pujita was initially mobilized to put on the teach-in after the attacks on Jawaharlal Nehru University (JNU) in New Delhi on Jan. 5, in which 50 masked people, later identified as members of the right-wing Hindu Raksha Dal, beat students and faculty with iron rods and acid bottles, vandalizing property and “specifically targeting Muslim and Kashmiri students.”

“[It was] an act of unprecedented terror that happened on campus,” Pujita said. “I spent six years there and all my political upbringing has been [from there], and I endow all my life and existence to that campus. So that was at once feeling helpless, being away, but also wanting to do things here and tell people what’s going on back home.”

Several speakers from the teach-in drew parallels between the situation in India and authoritarianism across the world. 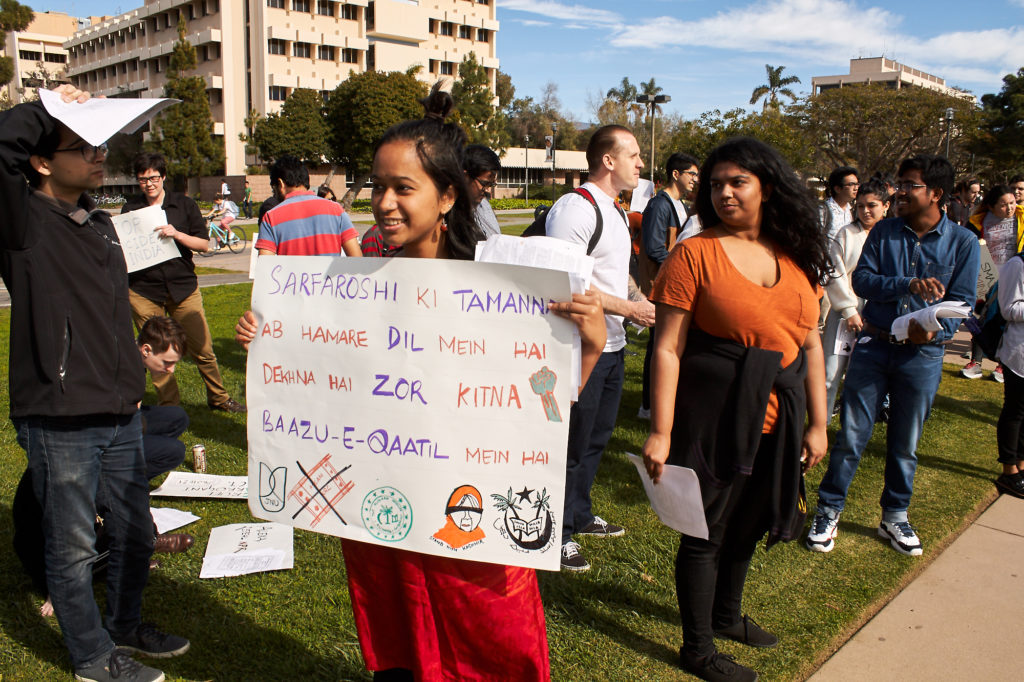 The teach-in at UCSB was an urgent call-to-action for people to care about “these oppressed millions who have taken to the streets” in India. Kaiyi Yang / Daily Nexus

Fourth-year English major Rachel Andrews, a student speaker from UCSB’s Students for Justice in Palestine, compared the military occupation of the Muslim-majority state of Kashmir  to the occupation of Palestine.

“Kashmir is considered the most militarized zone in the world. Excessive force is used by the army, even on children, and there are extreme restrictions,” Andrews said. “For example, Kashmir has a curfew, and in a similar way, Palestinians are not able to move freely.”

Article 370, which granted semi-autonomous status to Kashmir and Jammu, a Hindu-majority state, was revoked in August 2019, subjecting the two states to greater Indian influence and control. Following the revocation, the Indian government stationed tens of thousands of troops in Kashmir, suspended telecommunications and banned public movements, according to CNBC.

Fourth-year global studies and philosophy major Alia Reynolds, another student speaker from UCSB’s Students for Justice in Palestine, warned that the same pattern of “danger, hatred and persecution” will continue to spread across the world and the United States.

“If we do not engage in the advocacy, policy, prevention, restructurement and revolution that is available to us now, we will fall into the same pattern,” Reynolds stressed. “If we do not fight for the rights and lives of those around the world who are currently being denied those rights or tortured or killed for fighting for them, who will fight for us when our time comes?”

Other speakers expressed hope through the multidimensional student movement emerging out of the Bharatiya Janata Party (BJP)’s exertion of authoritarian power.

Bishnupriya Ghosh, chair of the global studies department, expressed hope for the college students across India that have been launching protests at their universities, most recently after the passage of the CAA in December, and fighting to reestablish India as a secular, democratic republic.

“As the attacks on the universities have continued, [at] many universities, there’s been a broad coalition, visibly between Muslims, between Dalits [and] between women and students,” Ghosh said in her speech. “It’s a coalition which is extraordinary because it goes across ethnic and linguistic grounds, religious borders, castes and generations.”

For Raghu, the teach-in at UCSB was an urgent call-to-action for people to care about “these oppressed millions who have taken to the streets” in India.