The Daily Nexus
Tennis
Gauchos Aim to Knock Off Undefeated Lions
January 30, 2020 at 5:32 am by Annika Pearson 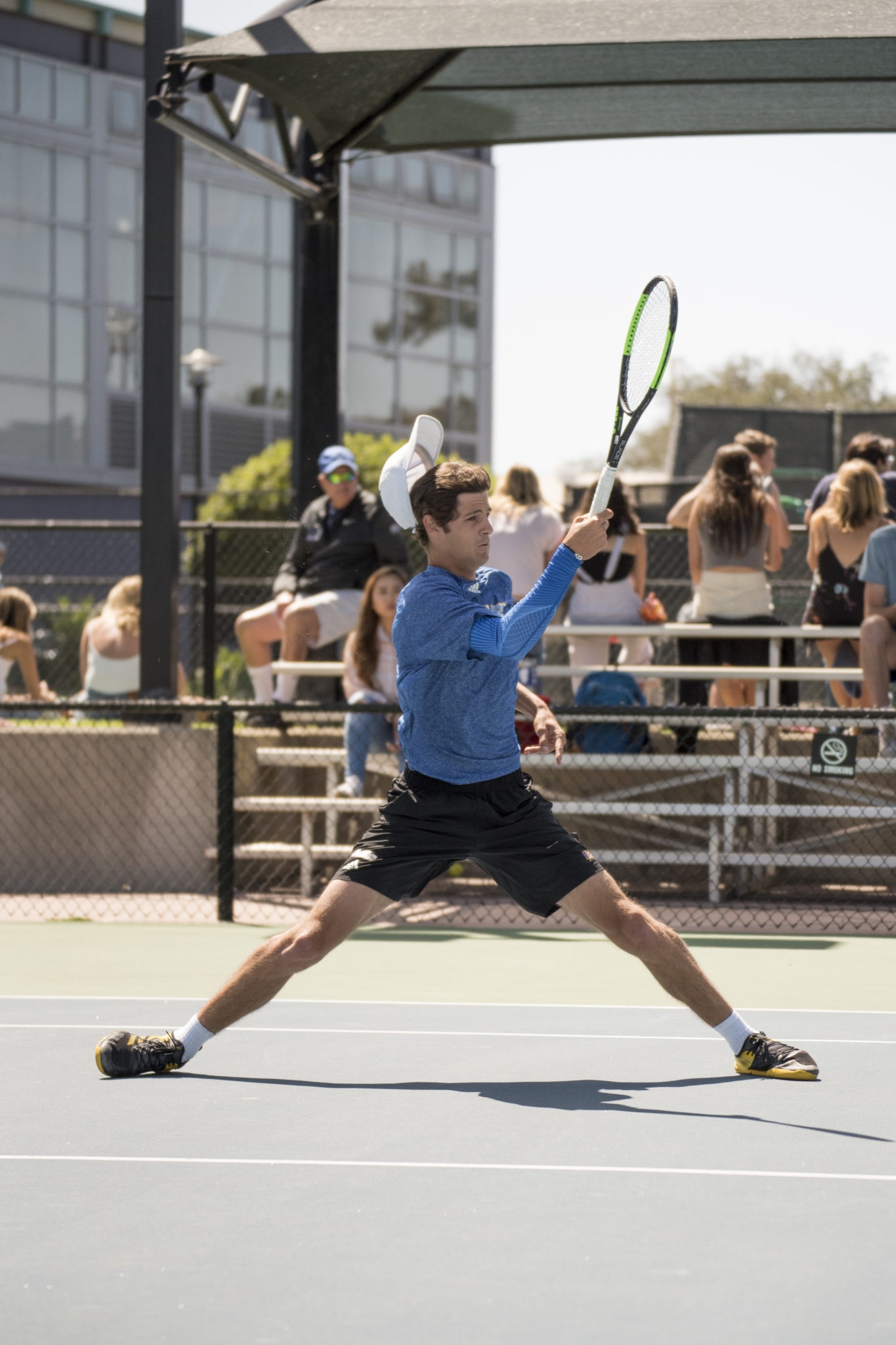 From the sheer force of running after the ball, Joseph Guillin’s hat falls off. Siavash Ghadirir/Daily Nexus

The UC Santa Barbara men’s tennis team, a product of one of the university’s most consistently dominant programs, has struggled this 2020 season to find that winning mojo which has defined them throughout these past years. Last weekend, the Gauchos ended a three-game dry spell and finally landed their first victory in a consolation-round closer against UNC Wilmington, pushing their record to 1-3.

In what will be their fifth away game in a row, Santa Barbara heads back down the coast and to Westchester to face Loyola Marymount University. LMU, though only two games deep, boasts a spotless 2-0 record. In their 2020 season debut, the Lions defeated Santa Clara 5-2, a team who recently took down UCSB in a narrow 4-3 showdown.

Against SCU, Loyola Marymount saw solid performances from the top of its lineup. Across the first three courts, sophomore Keenan Mayo, junior Diego Nava and redshirt-junior Lucas Moreno (whose win clinched the team’s victory) shut the door on their opponents in two sets each. Both Nava and Moreno walk into their respective match-ups with a clean 2-0 singles record.

Their recent successes, however, perhaps give a misleading impression of the returners’ consistency on the court. As of last season, neither Nava nor Moreno  — frequenters of courts 3 and 4 — had won more than six matches out of a minimum 14 games. In fact, the Lions’ win percentage rounded out at around a mere 37%.

However, it would be naive to think that LMU’s roster — or Santa Barbara’s, for that matter — is static or that its lackluster performance last season will be repeated in this new decade. Already, LMU’s head coach Tom Lloyd picked up Mayo, a University of Illinois transfer. The SoCal native carried out an impressive 12-16 collegiate debut, taking down strong nationally ranked competitors.

And yet, the street goes both ways; at this point last year, UCSB was on its way to a .750 win percentage, so there is no doubt that this season has been one of realignment. Now predominantly juniors and sophomores — with a solid transfer and freshman stud interspersed into the mix — the Gaucho lineup has been doing its best to adjust its gameplay. Though it hasn’t translated into wins, the team has shown some promising performances thus far.

The past four games have especially shown the strength of the team in the singles competitions, a facet which must continue into Sunday’s game. With exception to the season opener versus University of Oregon, the Gauchos have raked in at least two singles victories per game, totaling nine since the start. No. 8 senior Joseph Guillin and junior Victor Krustev each delivered two wins last weekend, backed up by prior wins from sophomore Wilhelm Saiga, sophomore Alejandro Vedri and a clinch by rookie freshman Joshua Williams.

That being said, the Gauchos’ biggest shortcoming has been their performance on the doubles courts, reflected in a win-to-loss ratio below .500. Working to control the majority of doubles matches will be crucial for UCSB, as they have the opportunity to take advantage of LMU’s top pairs who have so far delivered inconsistently. This may put pressure on number one duo Krustev and junior Joseph Rotheram who seem to still be finding their groove after leaving last weekend’s tournament victory-less.

Aside from this, the only thing to wish for is that the Gauchos have finally turned a corner and that from here on out, the team finds consistency in their gameplay and relies on each other to deliver their best. UCSB takes on LMU on Sunday, Feb. 1 at 11 a.m.