The Daily Nexus
News
UCSB Students Mourn the Loss of Kobe Bryant and His Daughter Gianna
January 27, 2020 at 10:29 pm by Max Abrams

Kobe Bryant, his daughter Gianna and seven others lost their lives just before 10 a.m. on Sunday after their helicopter crashed in the hills of Calabasas while en route to a youth basketball academy. 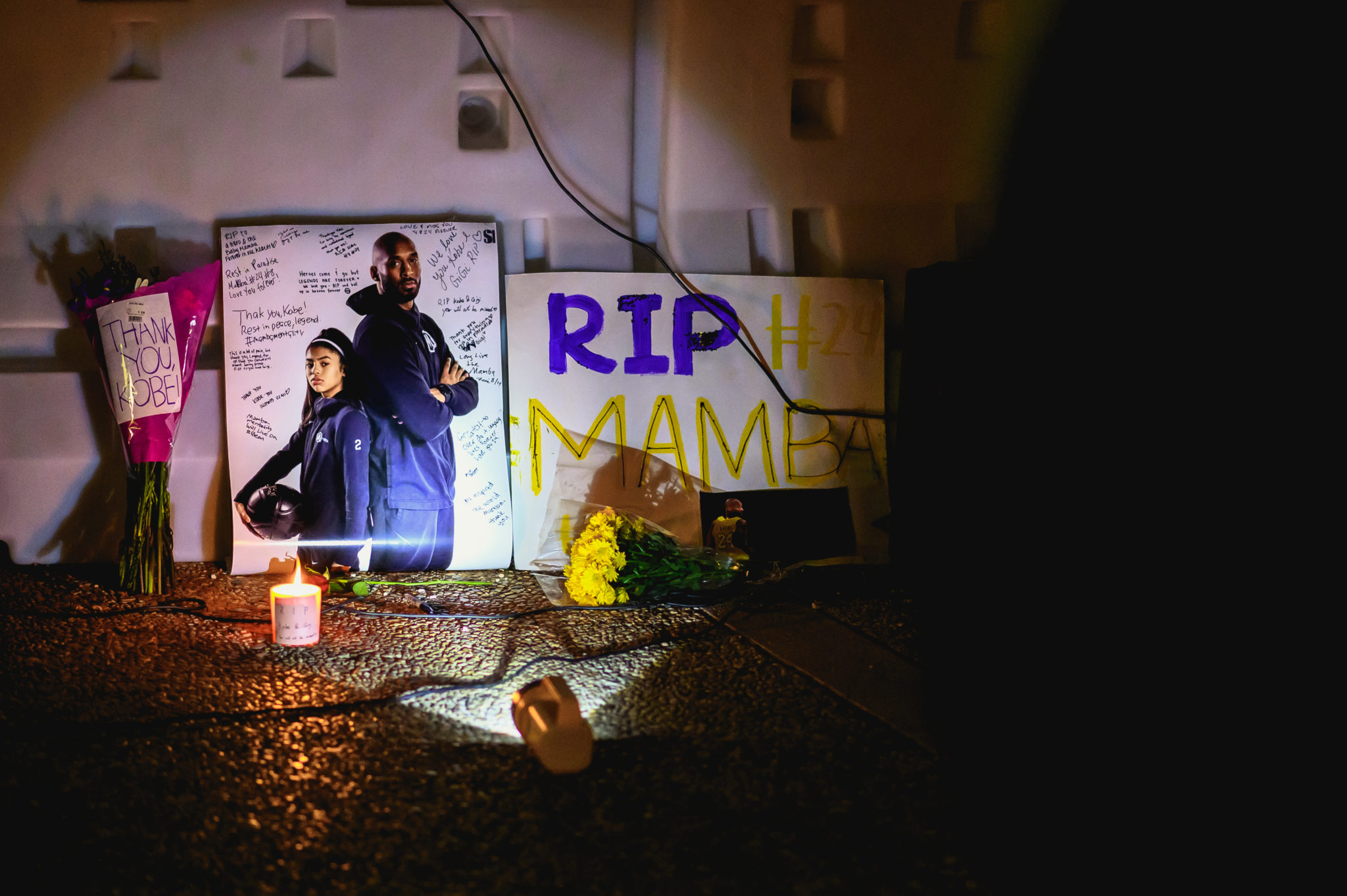 At UC Santa Barbara, an outpour of roughly 200 students gathered under Storke Tower at 8 p.m. to mourn the loss of Bryant, 41, and Gianna, 13. Max Abrams / Daily Nexus

News of Bryant’s death sent ripples of emotion throughout the United States and the rest of the world. An icon to many, fans paid tribute to Bryant and his legacy by holding vigils all over the world, but most prominently at the Staples Center in Los Angeles, home to Bryant’s 20-year tenure with the Los Angeles Lakers, The New York Times reported.

At UC Santa Barbara, about an hour and a half away from the crash site, an outpour of roughly 200 students gathered under Storke Tower at 8 p.m. to mourn the loss of Bryant, 41, and Gianna, 13.

The university was also home to Bryant’s basketball camp, the Kobe Basketball Academy, which ran for eight years at the Thunderdome and was designed to help kids hone their basketball skills, Noozhawk reported.

At the center of the vigil rested a picture of Bryant and his daughter, a bouquet of flowers and a poster inscribed “RIP #24 MAMBA.” Bryant’s numbers — 8 and 24 — glimmered off the jerseys of students facing the candlelight, while shades of purple and gold draped the crowd from the many who sported Lakers attire.

“Obviously, if you came out, Kobe meant a lot to you,” Nasrat Hamid, a fourth-year chemistry major and the event’s organizer, said to the crowd.

“It’s kind of crazy how someone I’m sure most of us have never met before had such a huge impact on our lives. It’s kind of silly when you think about it — I’ve never met this guy but here I am crying my eyes out because he just passed away.”

Hamid organized the event earlier that same day after emailing Chancellor Henry T. Yang for permission to hold the vigil, and Yang helped provide Hamid with microphones for the event. After getting permission, Hamid’s sister, Nishat Hamid, said they used social media to let students know an event in Bryant’s honor would be taking place that night.

Hamid spoke to the crowd first, leaving the microphone open for students who wanted to share their favorite memories about Bryant, the impact he had on their lives and what they’ll remember most about him.

As students spoke through the tears, those in the crowd banded together, arms wrapped around one another as they mourned.

One student who took the mic saw Bryant’s death as an opportunity to look back and resolve the negativities in life that weren’t worth the frustration they caused.

“If you have any conflict with anyone, maybe just resolve it and say ‘I love you,’ even in  a friendly way. It’s what Kobe would have wanted,” the student said. “I love that man, and even though I don’t know anyone here, I love you all.”

“Just keep powering through [your] own lives and look around and love those near [you] because we are not guaranteed a tomorrow.”

In the minutes leading up to the moment of silence at 8:24 p.m. — to honor both of Bryant’s jersey numbers — one student put his phone next to the microphone to play Lil Wayne’s “Kobe Bryant” after asking the crowd if they’d like to hear the song.

After a few minutes of silence, students resumed speaking to the crowd as others began to leave.

One student recalled how an introduction to basketball — and later, a passion for it — came from Bryant, who inspired them to pick up a ball after watching him on television.

“I’m having fun. Kobe taught me how to love the game,” the student said. “I have this Kobe poster in my room and now I can’t look at it all that much anymore, just because it hurts that much.”

“Now, I will never get the chance to.”

[Correction Jan. 28, 8:33 a.m.]: In a previous version of this article, Nishat Hamid’s name was misspelled. This article has been updated with the correct spelling of Hamid’s name.