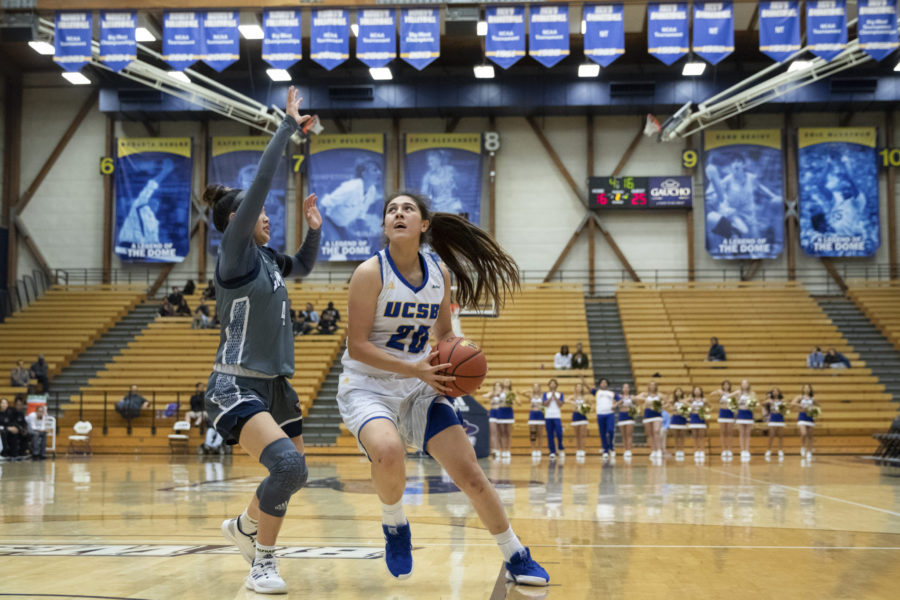 Behind one of their best offensive performances of the season, the UC Santa Barbara women’s basketball team picked up a crucial road victory, knocking off Cal State Fullerton by 75-66 on Saturday.

With the victory, the Gauchos have moved to 3-3 in the conference, overtaking CSUF — which fell to 2-3 with the loss. In addition, Head Coach Bonnie Henrickson picked up her 400th career victory.

“It’s great, but of course it’s more about getting our third conference win, a road win and a payback game for all the right reasons,” Henrickson said.

After a less-than-spectacular offensive display on Thursday against Davis, UCSB scored their second-most points in a game this season on Saturday. In large part, that improvement can be attributed to the ‘Chos’ efficient performance on the floor, with the Gauchos shooting 46.4% on the night after shooting only 28.1% on Thursday.

From the get-go, UCSB came out with a far more aggressive tone than it set against the Aggies. On the first possession, junior forward Mira Shulman — in her first-ever start — drove hard into the paint, finishing over two Titan defenders to give Santa Barbara a lead it would notrelinquish for the rest of the game.

The insertion of Shulman into the starting lineup seemed to ignite a fire within UCSB — especially among the bench. In total, the ‘Chos’ bench outscored the Titans’ bench by 34-14 on Saturday, with senior Tal Sahar, freshman Johnni Gonzalez and sophomore Megan Ormiston all turning in fantastic performances.

Despite a rough shooting performance against Davis, Sahar provided some much-needed spacing off the bench, hitting 50% of her 3-pointers en-route to a 12-point game. Gonzalez too seemed to discover her stroke off the bench, making all of her shots and finishing with 9 points.

But perhaps the most important performance came from Ormiston, who was forced to play heavy minutes with freshman Ila Lane in foul trouble for most of the night. In 22 minutes, Ormiston finished with 13 points on 86% shooting and 5 rebounds — easily her best performance of the season.

Ormiston’s presence in the paint also played a large role in the Gauchos’ domination of the Titans on the boards. On the night, UCSB outrebounded CSUF 42-23, with Lane leading the way with 14 rebounds in only 18 minutes. Crucially, those rebounds led to 21 second-chance points for the Gauchos — compared to only 2 for Fullerton.

Defensively, the ‘Chos did a good job of limiting CSUF’s dynamic duo: junior guards Taylor Turney and Raina Perez. After allowing the duo to score 43 combined points in the first matchup between these teams, UCSB held them to 27 combined points this time around. With the Gauchos’ defense keying in on the two stars, Perez merely went 5-13 from the floor, while Turney went 6-15.

This win serves as revenge for the previous matchup between these two teams, which ended in a 70-68 Fullerton victory in overtime.

Next, UCSB must turn their attention back to UC Davis — the team that beat them just this past Thursday. The Gauchos will hope they can get revenge once again in that game against a balanced Davis team.

UCSB will take on Davis this Saturday at 2:30 p.m.