On Wednesday, dozens of UC Santa Barbara graduate students held a “sick-out” and a demonstration at Storke Tower in solidarity with striking graduate students at UC Santa Cruz, who are currently demanding a cost-of-living adjustment to their pay to accommodate for high rental prices. 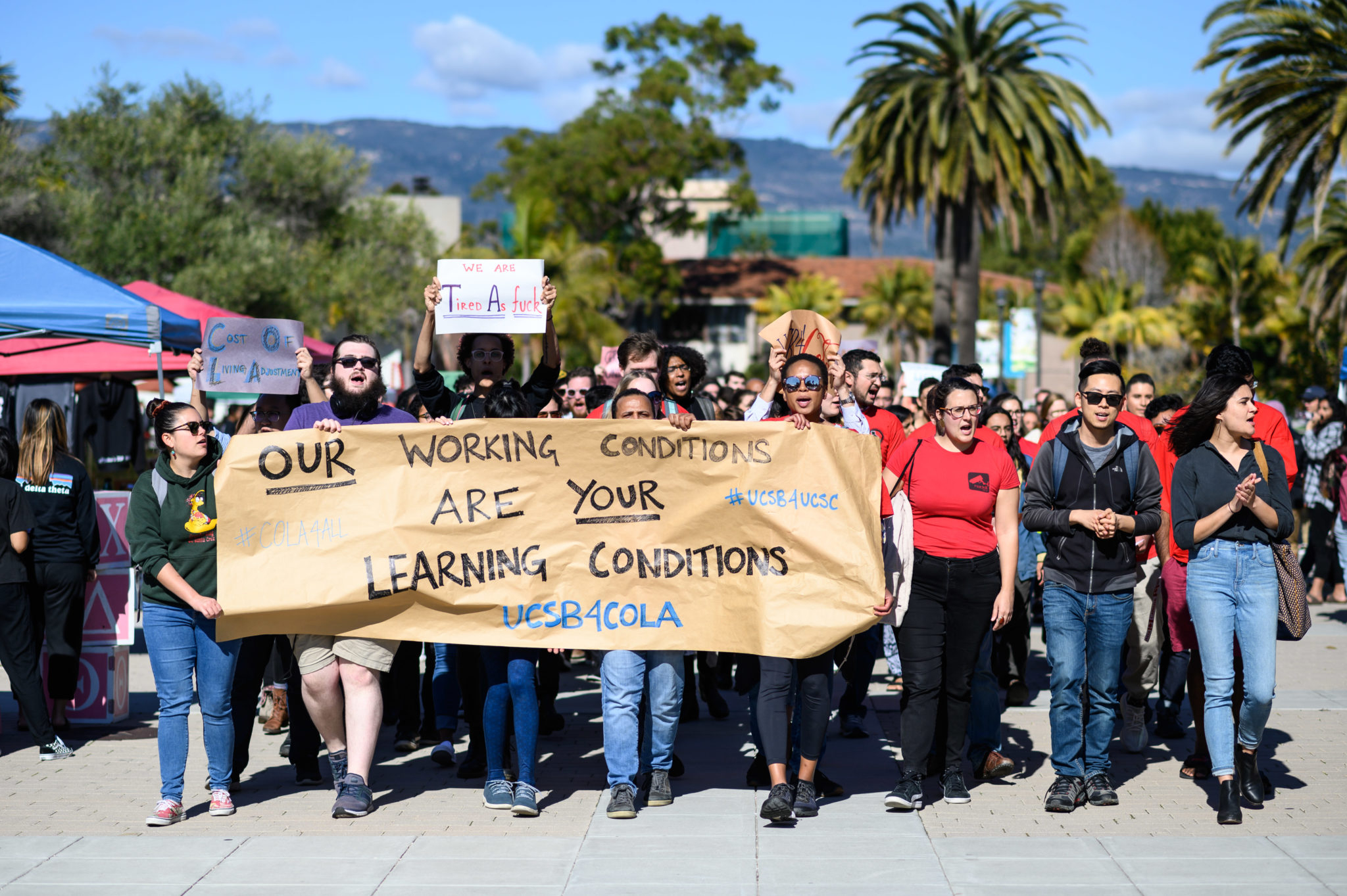 UCSB graduate students are informally calling for a similar cost-of-living adjustment (COLA), although advocacy group UCSB 4 COLA stressed that Wednesday’s action was just the first step in a larger COLA movement and not a formal strike.

Graduate students at UCSC have been on strike since Dec. 9, 2019 and have been calling for a COLA of $1,412 per month since September. The “sick-out” on Wednesday was planned to coincide with a UC Regents meeting, in which the UCSC strikers planned to address the UC Office of the President directly.

UCSB’s Wednesday demonstration focused on the parallels between the challenges faced by UCSB and UCSC graduate students, such as steep housing costs, and the high number of students at both schools who are considered “rent-burdened,” meaning that they pay more than 30% of their income toward rent.

Last week, the UCSB Graduate Student Association took an informal poll of roughly 600 graduate students and found that respondents, on average, spent 48% of their $2,091.98 monthly income on rent.

Organizers said that the “sick-out” was meant to draw attention to the COLA movement and gather support from graduate and undergraduate students who may not be aware of the movement.

“There’s people [here] from [the Graduate Student Association] …  but this is really a separate movement that grad students have started,” said Emily, one of the organizers of Wednesday’s event who declined to give her last name. She explained that the group was mostly composed of union members from UAW 2865.

“Similar to Santa Cruz, this is grad students coming up, standing up and saying, ‘What we’re dealing with now is unacceptable,’ and so we’re really following their lead on that,” Emily added.

In addition to calling in sick on Wednesday, close to 150 graduate students and supporters marched from Storke Tower to the Arbor, chanting, “C-O-L-A, we need fair pay!”

Once in the Arbor, several graduate students spoke to the crowd and to students who stopped to watch the demonstration.

“Some of you may be wondering why grad students are rallying today … it’s because of the immense hardships that we’re facing. We can choose to keep our heads down and go on with business as usual. Or we can speak up about these hardships,” Rammy Salem, a graduate student in the psychological and brain sciences department, said to the crowd.

“Some of us are homeless. Some of us skip meals. Some of us have to work multiple jobs and still work paycheck-to-paycheck,” he continued.

“Most of us think the cost of living is way too expensive — that ain’t right. So if you agree that grad students deserve to live dignified lives, support the movement.”

Other speakers called for the support of undergraduate students, staff and faculty as well, stressing that “it’s not just grad students.”

Pratik Raghu, a Ph.D. candidate in the Department of Global Studies, said to the crowd that he was at the demonstration because he knew he was just “one serious medical accident away from potentially losing [his] apartment.”

“We’re all out here because we know that we are past the point of asking nicely. Asking nicely doesn’t do shit,” he continued.

Raghu said in an interview afterwards that he was “nothing more than a participant” in the demonstration, although he felt compelled to speak to the crowd in the Arbor because he is an international student.

Other international graduate students spoke to the Nexus about the restrictions they face due to their visas and how that can impact their ability to support themselves throughout the year.

“If UCSB decides not to employ me over the summer, I cannot work somewhere else,” they said.

Hannah Kagan-Moore, a graduate student in the Department of History of Art and Architecture, said that graduate students as a whole struggle over the summer when there are fewer teaching appointments.

“I’ve had a couple of health issues that essentially bankrupted me this summer,” Kagan-Moore said.

“Because we make so little as instructors of record and as TAs, that has had an extraordinarily deleterious effect on my ability to do my own research and my ability to serve my students. It is a holistic problem and the amount of labor that we render to this institution should be compensated,” she added.

After Wednesday’s demonstration, organizers said they plan to regroup to begin drafting demands. Emily added that the demonstration was designed to involve more people in the discussions so the meetings are “as representative as possible of the grad student population.”

“I think, for [the university], it’s good to maintain us divided, and we are showing that we can unite,” Trincado said.

A version of this article appeared on p. 1 of the Jan. 23 print edition of the Daily Nexus.

Correction [1/23/2020 5:27 p.m.]: A previous version of this article referred to Tudisco with the wrong pronouns. This article has been updated to reflect their correct pronouns. The Nexus regrets this error.

Hi friends – we actually registered 224(+?) people who signed in at the rally and march, so it is certain that there were 250-300 in attendance.