The University of California’s largest union reached a tentative four-year contract agreement with the UC for its service workers late last night, bringing an end to three years of contract negotiations after at least six strikes during that period. 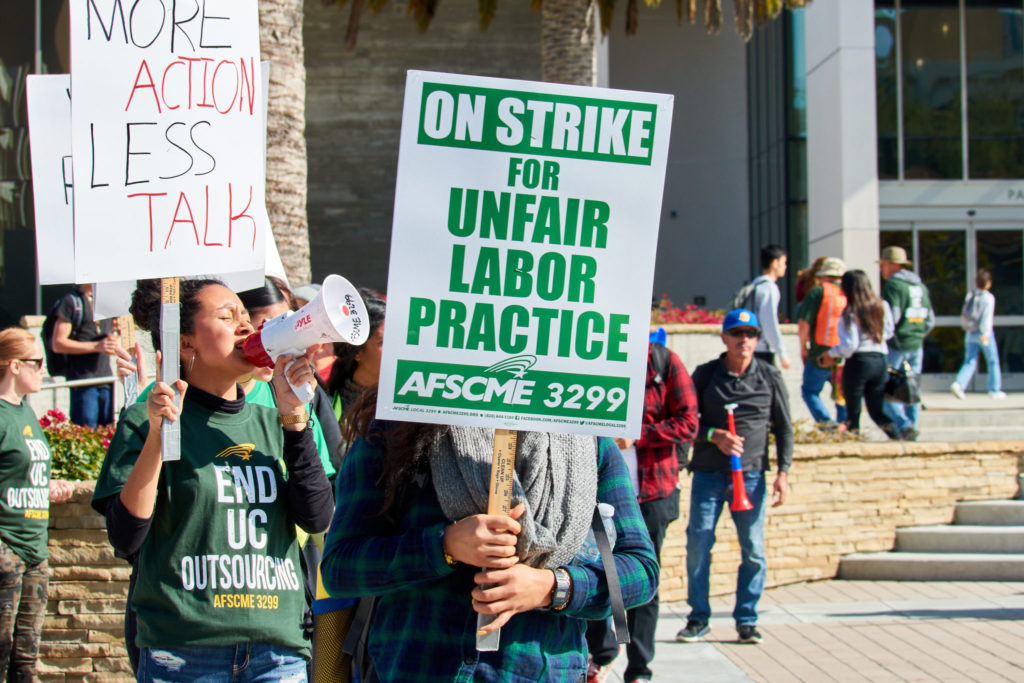 AFSCME workers have been negotiating for a new contract since 2017. Ida Kazerani / Daily Nexus

American Federation of State, County and Municipal Employees Local 3299’s (AFSCME 3299), which includes 10,000 service workers and 16,000 medical care workers, has been negotiating for a new contract since 2017; the union has also went on strike several times during this period, including most recently in November 2019 regarding alleged unfair labor practices.

“[The] UC is pleased that after working with AFSCME leadership to address joint concerns and resolve our outstanding differences we have reached a multi-year agreement for our valued employees,” UC spokesperson Andrew Gordon said in an email.

Gordon said that the contract includes:

The contract, along with adding new health and pension benefits, prohibits layoffs “as a result of subcontracting decisions” and places additional restrictions on the UC’s ability to contract out service work — a point of tension between the UC and union workers and a restriction that was “long sought by the union,” AFSCME Local 3299 spokesperson Todd Stenhouse said in a press release sent out Wednesday morning.

Gordon said prohibiting layoffs “as a result of subcontracting decisions” was already a part of the previous contract. He added that the new contract will also “make it easier” for eligible contract workers to convert to UC employment.

Stenhouse did not immediately respond to request for further comment.

In the press release, AFSCME 3299 President Kathryn Lybarger called the tentative contract “historic” and one that will “combat the outsourcing abuses that have only served to depress wages, erode benefits and increase inequality.”

“While the tentative agreement reached by UC and AFSCME represented service workers is an important sign of progress, there remains more work ahead,” Lybarger said.

She added that “it is now time for UC to provide its AFSCME represented Patient Care workers with an equally fair agreement that honors our members’ contributions to UC’s highly profitable health system.”

The tentative contract must be voted on by the union’s service members before Jan. 30 in order to be enacted.