The Daily Nexus
News
Student Documentary “Not One More” Puts a Story of Tragedy in the Hands of Community
January 23, 2020 at 12:20 am by Max Abrams

The sun rises high and bright in Isla Vista. But after one evening nearly six years ago, many wondered if it would ever return. That was the night of the Isla Vista tragedy, an evening so devastating that it brought an entire community to its knees.

Isla Vista lost six of its own that night, while 14 others were injured. For a brief period of time, nearly everyone in Isla Vista could recall where they were that evening. But in a town defined by its high turnover, first-hand experiences diminished as students graduated, leaving business owners and long-term residents to bear the grief. 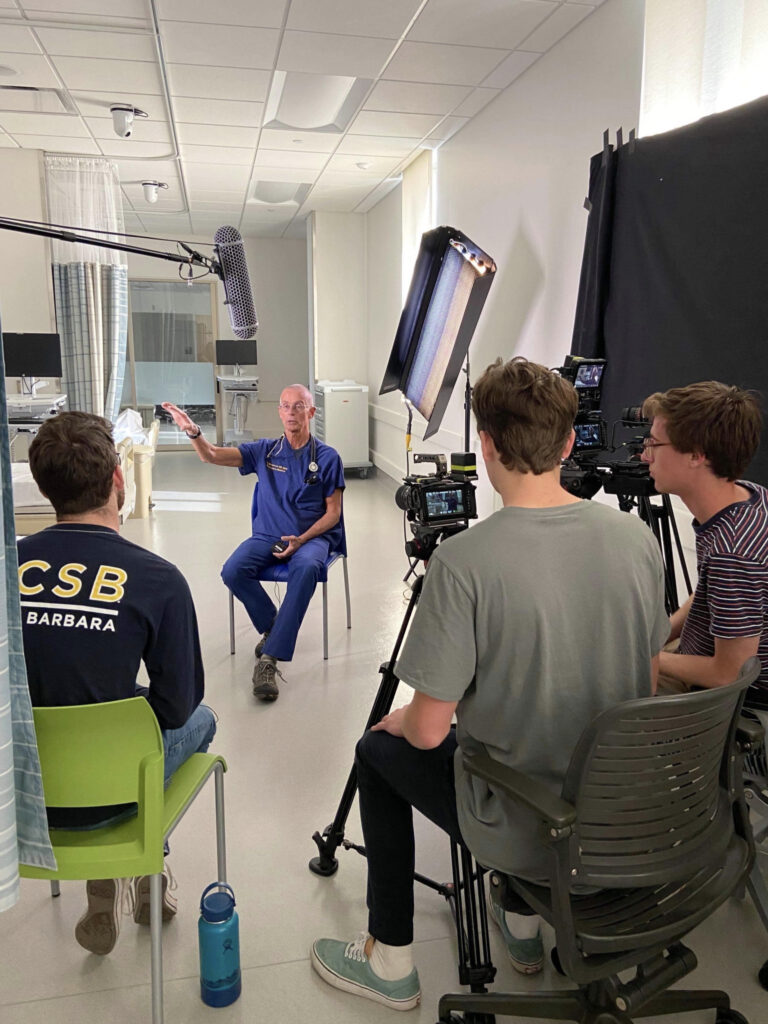 “Not One More” aims to retell the story of the Isla Vista tragedy from a “survivor-based” angle. Courtesy of Cameron Leingang

In an effort to bring the first-hand perspective back into focus, a new documentary called “Not One More” aims to retell the story of the Isla Vista tragedy from a “survivor-based” angle that excludes the attacker’s name from the narrative, according to fourth-year film and media studies major Cameron Leingang, who is the documentary’s director.

The documentary’s narrative is instead established through interviews with politicians, UCSB faculty, psychologists, researchers, first responders and surgeons, giving viewers a previously unseen perspective into the events leading up to, during and after the Isla Vista tragedy, Leingang said.

“The media has already done a great job of making sure that [the attacker] has been the focus of this event. So that is the last thing we’re going to do,” he said.

“They don’t know the victims’ stories. And if they did, people forget about them,” said Lexi Lunchick, a senior film and media studies major and the documentary’s producer.

Although they’re now confident in the film’s direction, with a bulk of its interviews already completed, Leingang said that he and Lunchick initially struggled over the summer to conceive a pitch for their Fall Quarter 2019 film class, which, if selected, would extend their class into Winter Quarter 2020 for the filming of the movie.

“We weren’t really sure what we wanted to do, but we were still meeting frequently to talk, knowing that we wanted to pitch something,” Leingang said. “And then, this summer, we had a really bad string of mass shootings. There were three within a week — El Paso, Dayton and the [Gilroy] Garlic Festival right nearby.”

“I think it just kinda clicked that it was like, ‘Oh, this also happened here. Maybe this is something that needs to be told,’” he added. “That was kind of the spark.”

Before getting a chance to pitch the film, Leingang said he first had to enroll in a pitch session during fall quarter. To do so, he, alongside 27 other students with pitches, raced to send in their pitches when the submission portal went live.

“Whoever had the fastest computers — you’re in,” Lunchick said. “Only 13 [students] got into the actual pitch session, and in the first 60 seconds alone, there were, like, 23 applications,” Leingang added.

Leingang’s submission made it to the next round. Now flanked by his movie crew, Leingang said he competed against the 12 other teams in an on-stage pitching competition for four spots before a panel of judges that was comprised of industry professionals.

If selected, Leingang said the team would have the opportunity to produce their movie during Winter Quarter 2020.

“The pitches happened on a Friday and they said that [the results] would get posted midday Monday,” Lunchick said. “We were sitting in class in Pollock [Theater] and we were told it was going to be [released at 12 o’clock] but one of the judges was late giving their answer.”

“I got up to go to the bathroom to go see if it was posted and my professor yelled at me to sit down,” Leingang added.

But soon after, Leingang and Lunchick saw a Facebook post from their film and media studies group chat that announced which four groups would go on to produce their films.

“One of the people posted the picture of the names of the four that got picked. As soon as we got the notification, we quickly looked and then saw that ours was on there,” Lunchick said.

But as Leingang and his team began planning out interviews shortly after the pitching competition, he said they faced a problem early on: They “had no credibility; we’re just a student film.”

Leingang said he reached out to Assistant Vice Chancellor Katya Armistead and graduate student Melissa Barthelemy, who is writing her dissertation on the Isla Vista tragedy, to help assemble sources. UCSB also aided him in contacting the victims’ parents, he said.

“A lot of the other crews started filming very quickly, which was panicking at the beginning,” Leingang said. “But once we started rolling, we had names on our film of people who are respected and people who have stories … we’ve had great success with almost everyone we’ve reached out to.”

Following pre-production, which took about five weeks, Leingang said the team then began filming in mid-November. By mid-February, Leingang said he aims to have all the filming completed in anticipation for its release sometime in March.

While conducting interviews, Leingang said he and his team were always sensitive to the grief their subjects were experiencing but was surprised by how “open and willing” people were once the interview began.

“A lot of the time, the very first thing they say to me is, ‘Thank you for doing this,’” Leingang said.

“One of our interviews was just talking about how it’s good to talk about [the tragedy] every once in a while,” he added. “People are finding it cathartic.”

In a broader sense, Leingang said the film’s narrative has been heavily shaped by what has been gathered through interviews: “very strong personal stories” that built an understanding of “what they experienced that night, what happened and what happened the next day.”

As the team conducted interviews — which included a mid-quarter trip to Kentucky — Leingang took note of a common thread expressed by many people who spoke on camera: “What a lot of our interviews have stressed so far is a call for sanity,” in that many people are still overcoming the shock associated with the tragedy.

For Lunchick, filming the documentary has been a learning experience, in part because working on the film has exposed her to the changes in Isla Vista since the tragedy, such as the bushes planted at sorority Alpha Phi after two women lost their lives there.

“I think that future generations of UCSB students are always going to be affected,” she said. “You never know if one other student walking by knew someone or their sibling that went here before knew someone.”

In a similar sense, Leingang said he came out of producing the film with a new sense of appreciation for life and how quickly things can change in the wake of tragedy.

“I’ve emphasized this the entire time; you don’t really think it’s going to happen to you or where you live and then to actually have it happen and to you,” he said.

“We interviewed someone who was supposed to hang out with the girls that ended up being killed. They made a last-minute decision to do something else and if she would’ve continued hanging out with them, who knows what would’ve happened. Stuff like that, it’s eerie, and it sends chills down your spine.”

After the film makes its initial debut as a 30-minute final project for Leingang’s two-quarter film class, he and Lunchick said they hope to produce an extended version — an hour-long “documentary feature” —  to submit to film festivals in hopes of drawing more attention.

Recalling all the hardships, memories and interviews experienced while producing the documentary, Lunchick said she finds herself returning to the time she and the team flew to Kentucky to interview Bob Weiss, who lost his daughter, Veronika, in the tragedy.

“Something that we realized while we were there is just how one decision of where you are at one point can just change everything for everyone,” she said.

“It’s hard to sometimes believe that such tragic events really happened,” she said. “And it’s moments like that that really stick out and once again feel surreal with it all and put it into perspective that this event was real.”

“Veronika touched this. We’re holding this book that’s hers.”

A version of the article appeared on p.3 of the Jan. 23 edition of the Daily Nexus.