Surrounding this potpourri of prospective coders on all fronts were sponsorship booths and mentoring engineers on call — some students in graduate school and others professionals from various industries — all keeping a watchful eye on these could-be recruits. 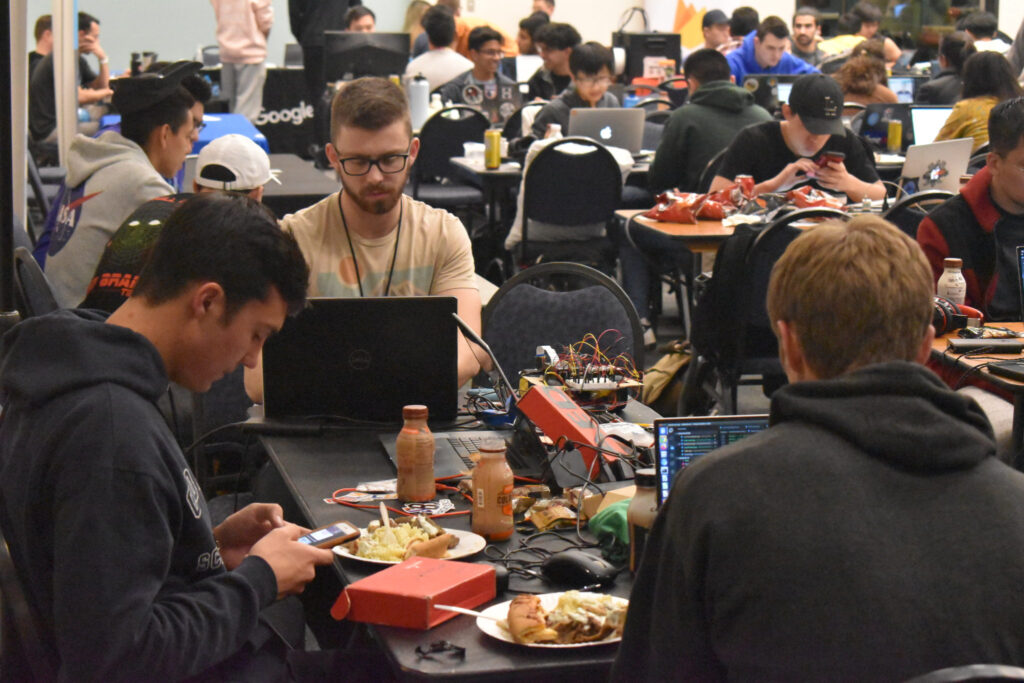 At SB Hacks VI from Jan. 10-12, Colorado School of Mines’ Peter Wilson, Van Wagner and Josh Rands worked on their grand prize-winning project to build a robot that could identify and locate a person having a heart attack and deliver an AED defibrillator to them. / Courtesy of Sean Crommelin

Co-directed by Jennifer Lai and Esther Liu, who worked alongside a team of six other organizers, SB Hacks VI marked a significant departure from last year in terms of management style, permitting fewer participants and putting an emphasis on bringing more local flavor to the competition.

“Last year, we had about 450 hackers. This year, we’re closer to 340. So, about a 100 people difference. And the biggest reason for that is because Jennifer and I decided that we want to completely redo our mission statement as SB Hacks,” Liu said.

Citing Santa Barbara’s relative geographic isolation from traditional tech hotspots to the north and south, the organizers decided that, rather than compete with hackathons such as Cal Hacks or LA Hacks, SB Hacks would “realign [their] focus on the hackers themselves,” according to Liu.

“To us, that looks like saying, okay, since we’re so isolated already, let’s try to bolster our own [computer science] community.”

“Our computer science department is much smaller than other schools. We want to give freshmen opportunities to come to a hackathon to make a project, because at our school we don’t have so many large companies and a lot of freshmen don’t have coding experience going into their second year,” Liu said.

Priority was given to local students for this reason.

“If we’re raising so much money to throw a hackathon at UCSB, the point is to cater to our community, as opposed to other people from different schools.”

Still, SB Hacks VI was a tremendous event, dominating Corwin Pavilion, drawing applicants from as far away as Queen’s University in Ontario, Canada, offering $29,000 worth of prizes and bringing 25 sponsors to campus, including Google Cloud, Amazon Alexa and Lockheed Martin.

Local companies were also incentivized to sponsor SB Hacks in order to foster a connection between computer science students on campus and businesses in the surrounding area.

“When we pitched the sponsors, we have a practice developed for them that tells them under which tier they’ll fall; if they give us X amount of money, they’ll receive [certain] benefits. For the local companies, we gave them a much better deal than say larger companies like Google or Amazon,” Liu stated.

There was an emphasis on bringing sponsors closer to the process with sponsor exhibitions, where sponsors could keep booths on the competition floor.

According to Liu, hacker experience was a big focus for organizers compared to last year, with new initiatives to improve accessibility.

Transportation logistics were one such change made in order to improve the experience of the competitors and to streamline travel. Some buses provided transportation to and from specific campuses, and a carpooling and reimbursement plan was put into place for students from more remote places.

“[Transportation] to the competition has been an issue in the past. We’ve had buses before, and we still do, but then we’re alienating every student who’s coming from a school that the bus isn’t being sent to,” Liu said. “It’s kind of like if you don’t go to a bigger school, you have to figure it out yourself. So I just wanted to be a little more inclusive than that.”

“So myself and two other organizers just made sure we can arrange a travel reimbursement or carpooling plan, which was very much inspired by the UCSB rideshare page for both the Bay Area and SoCal,” Liu added.

A significantly leaner team of eight organizers orchestrated the event, in contrast to last year’s team, which was comprised of 20.

Liu noted that the team of organizers often started the quarter strong, but struggled as the quarter progressed. During exam periods, “people would sort of drop off and then sort of drop the ball,” Liu said.

In response to these challenges, spring 2019 was marked by a re-interview process for every single organizer.

“We wanted to engage with people and ask if they are truly dedicated to the cause, or if they were just here for the resume booster,” Liu said.

Rather than give individual organizers specialized roles, the directors approached the event with a more “big picture” style of management, hoping to improve productivity and ensure that all organizers were competent in handling any circumstances which could arise. 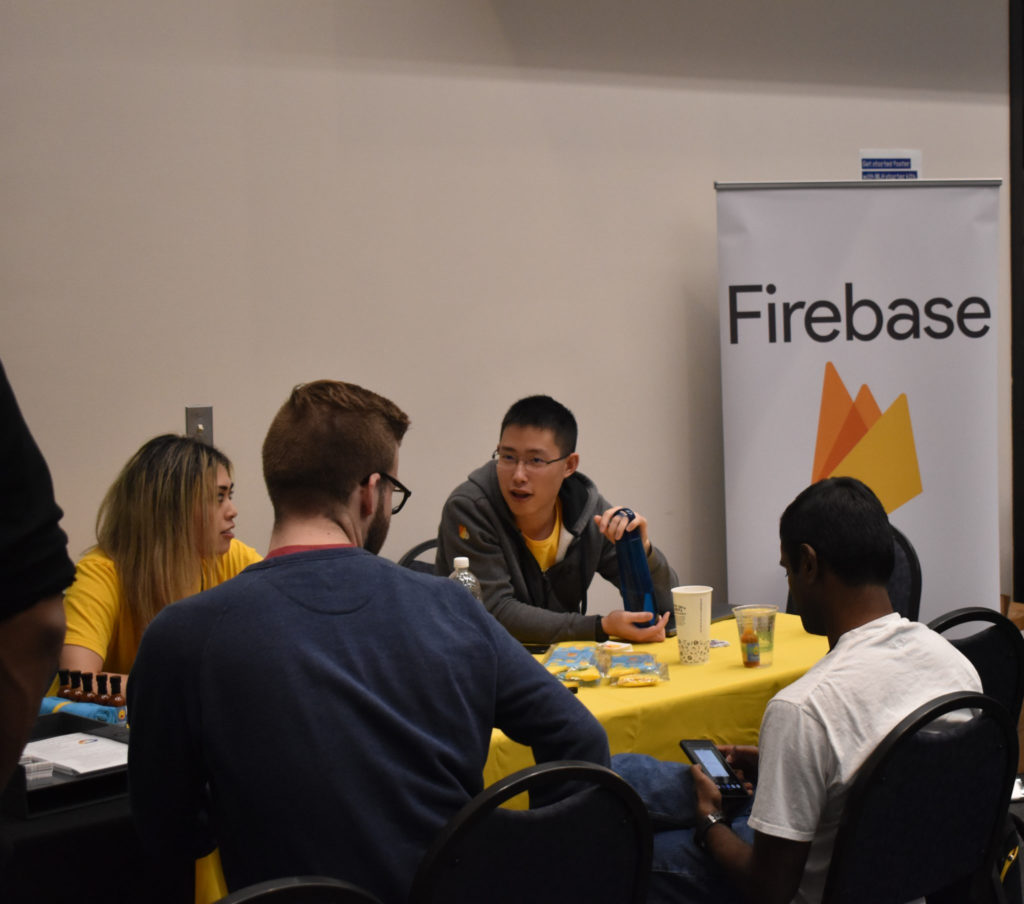 On the competition floor, the coders and their group mates labored over their projects for hours on end, working to sync up associated hardware, troubleshoot bugs or even completely overhaul an unworkable concept.

“Something people don’t realize is that programming takes a ton of time even for the smallest things, especially because these kinds of events are about learning. That’s one of the benefits of this 36-hour timeframe: people can stay up as late as they want. And a lot of programmers tend to do that where you’ll get onto a problem, and you’ll just keep on working on it until you solve it,” Akshay Heda, an organizer and competitor last year, said.

For some students, SB Hacks provides one of few opportunities at UCSB to observe principles of coding and computer science learned in class through the messy, muddy lens of reality and practical application.

“It’s kind of interesting to see some of them working on their homework and then trying to apply those algorithms and also learn the confusing practical actual designs as compared to all the theory they get in classes, because it’s often a complete mess in reality,” said Matthew Dupree, a fourth-year student in computer engineering who worked as a mentor during the competition.

The breadth of subjects covered in a hackathon is immense — one could even say it’s all encompassing.

Some well-known start-ups — such as GroupMe, during TechCrunch 2010 — were first conceived at a hackathon.

“Definitely people want their project to have practical application. You want to build something that has long-term competitive potential, like a lot of start-ups and small projects were conceived of during a hackathon and then they were like, developed further after,” Lucien Luc, a first-year computer science major who competed for his first time this year, said.

Luc and his teammates devised an alarm which would rouse a person out of slumber through the use of a fan which would vary in intensity according to the brain activity of a user.

However, the grand prize winners were a group of four men from the Colorado School of Mines — Van Wagner, Parker Steen, Peter Wilson and Josh Rands — who built a robot programmed to deliver an AED defibrillator to someone suffering a heart attack.

“Our idea was that we normally observe that AEDs are distributed sporadically throughout large buildings and are pretty hard to find,” Wagner said.

The robot would identify someone having a heart attack through computer vision, identify where an afflicted person was located and then navigate over to them.

“We wanted to basically use security camera footage to see if somebody’s having a heart attack, and then make something that could deliver the AED to them, instead of having to wait for somebody to go find it.”