The Daily Nexus
News
Downvote the Old, Upvote the New: r/UCSantaBarbara Grows in Community Members
January 16, 2020 at 12:08 am by KJ Clay

Throughout the last decade, the UC Santa Barbara Reddit page, r/UCSantaBarbara, has been a staple in the university’s student, alumni and faculty population. From providing help with housing and classes to helping people find friends with similar interests, the page has served as a one-stop shop for all things related to UCSB. 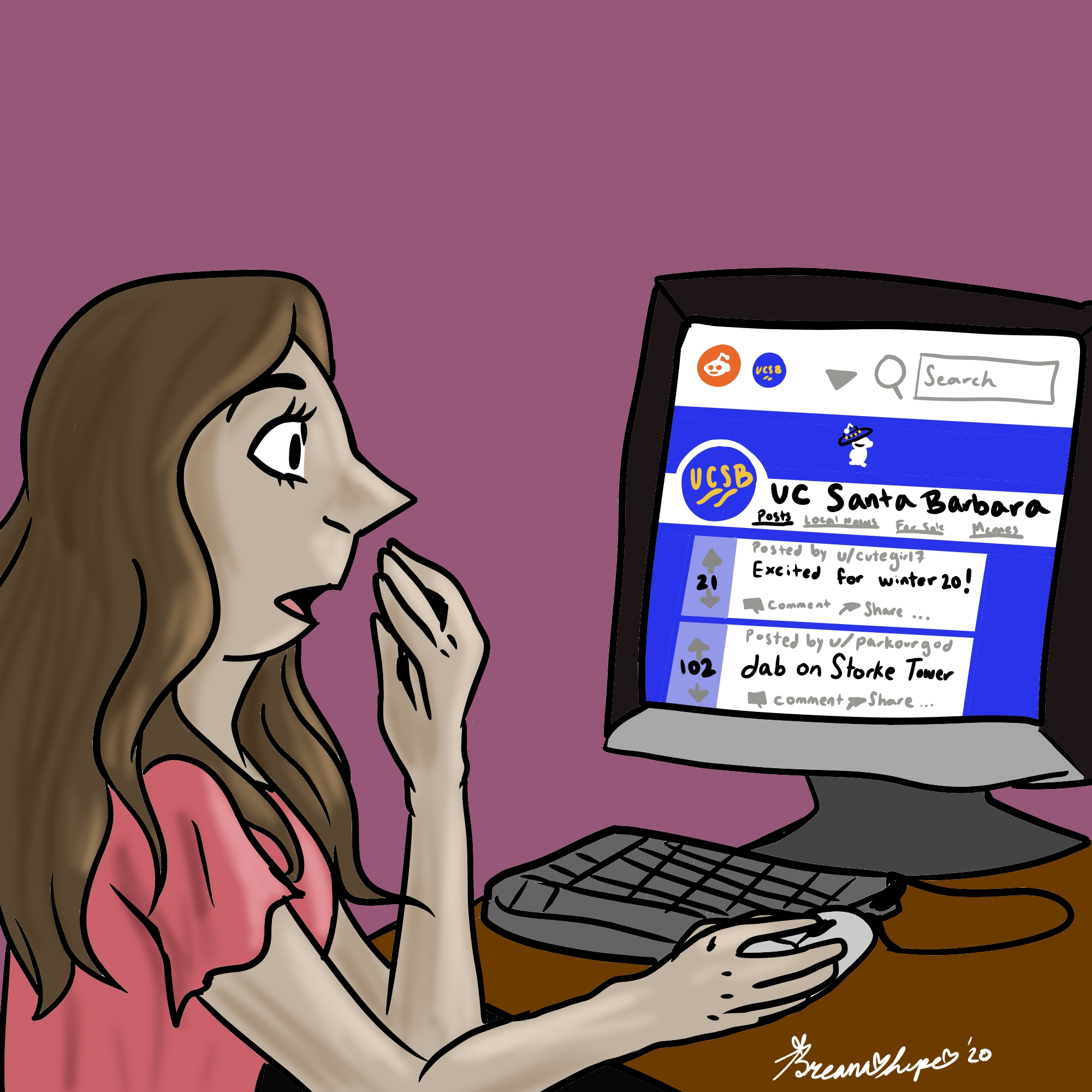 However, what most people do not know is that this is not the original UCSB Reddit page — it is the second version.

According to UCSB alumnus Bryce Boe, a current moderator of r/UCSantaBarbara, the page was created after the first one, r/UCSB, “wasn’t actively moderated” and received little attention from the people in charge of running it.

Boe, who goes by u/bboe on Reddit, made note of the r/UCSB moderators’ lack of effort, specifically after one of Boe’s posts was blocked by the spam filter and he could not reach the moderator to get it unblocked — so he took matters into his own hands and created an entirely new page in 2011.

“I just want to make sure that people who wanted to share stuff could share stuff,” Boe said in an interview with the Nexus. He said that he attracted users over to the new subreddit by simply telling people on the current page to come transfer over, promising a better moderator presence.

In the beginning, Boe worked in a team of three, including UCSB alumni u/beetling and u/Rlight. The team has worked hard to make the page “a place for inclusion” — where r/UCSantaBarbara members could come together and help one another, according to Boe.

In recent years, however, that “place of inclusion” has grown substantially. In the last eight years, the number of submissions to the page has grown by nearly 500%, according to a post detailing the number of annual submissions.

As a result, the page has become so popular that Boe and his team have found it hard to maintain the vast community on their own.

“It has been rather amazing watching this subreddit grow from an initial 50 to the now nearly 14,000 subscribers. However, lately, we’ve noticed we spend more of our time moderating than we’d prefer,” Boe detailed.

To accommodate the page’s growth, Boe posted a callout to the Reddit community in November, encouraging UCSB students to apply to become a new moderator and work alongside the current group.

After the callout was posted, Boe announced in a later post that month that two new moderators, fourth-year pharmacology major u/thejappster and third-year biological science major u/swimming_legend, had been selected. Both new moderators asked to be referred to only by their usernames, citing privacy concerns.

Boe said the two new moderators stood out in the selection process because they were some of the most active people on the page. Their post history met Boe’s and u/beetling’s standards for the position and they both appeared to be students who genuinely cared about the UCSB Reddit community, Boe added.

Like many others, u/thejappster said he used the subreddit to help him navigate his time at UCSB — researching classes, asking for advice and staying up to date on news in the community. As a new moderator, he said his focus is on promoting healthy discussion on a wide variety of topics, like local events and what professors or classes to take, and to encourage people with different views to express their opinions, as long as they are not attacking each other.

This can get tricky in stressful situations, such as when the Thomas Fire occurred near campus three years ago. The stress of the situation led to an influx of content and information that was difficult to aggregate, u/thejappster said.

Regardless, u/thejappster said the subreddit was meaningful to him because of the people who engage with it since they are often students, alumni or people who just live in the area.

Like many others, u/swimming_legend joined the sub his first year at UCSB and said he hasn’t regretted it for a second. He said he uses the page for academic advice, social connections and a good laugh.

Although u/swimming_legend said he has not been a member of the Reddit page as long as the other moderators, he felt proud to have been “a member of a community that … has a positive impact on its members.”

He also said he is excited to implement new ideas for the page and create a more friendly and helpful experience for its users.

The new moderator team has already hit the ground running; u/swimming_legend said they are working on a new way to improve the design of the page and make it more user-friendly.

One important change that the team is working on, according to u/thejappster, is a way to consolidate all the posts about social groups — such as people who are looking for a group to hang out with in real life. That way people looking to make real friends or who are feeling lonely have a place to meet others in similar situations.

However, the team’s main focus has been around establishing a syllabus bank, which officially launched on Jan. 5, according to an announcement on Reddit.

According to u/thejappster, the bank is a resource where “users submit syllabi to an online database, like Google Drive and you post that link to the Reddit page.”

The current and forthcoming improvements to the Reddit page are not only for the benefit of the sub itself but also for the students’ lives, as they use the page as a resource for all things UCSB, Boe stated.

“The students are the ones who have the opportunity and the time to put into making the community better.”

Correction [Jan. 17, 12:38 p.m.]: A previous version of this article stated that Boe was the head moderator of r/UCSantaBarbara, that he maintained the page by himself and that the current team of moderators has three members.

This article has been corrected to reflect that r/UCSantaBarbara has no official head moderator, that Boe did not maintain the page by himself and that the current team of moderators has four members.

A quotation that contradicted Boe’s statement regarding the moderators’ ideas for the Reddit page has also been removed.