UC Santa Barbara’s Intersectional Feminists — the organization that led the Oct. 31 demonstration to support survivors of sexual assault following multiple sexual assault allegations involving fraternities during fall quarter — released a list of demands to the public on Monday centered on improving communication and accountability from the university and fraternities after incidents of sexual violence. 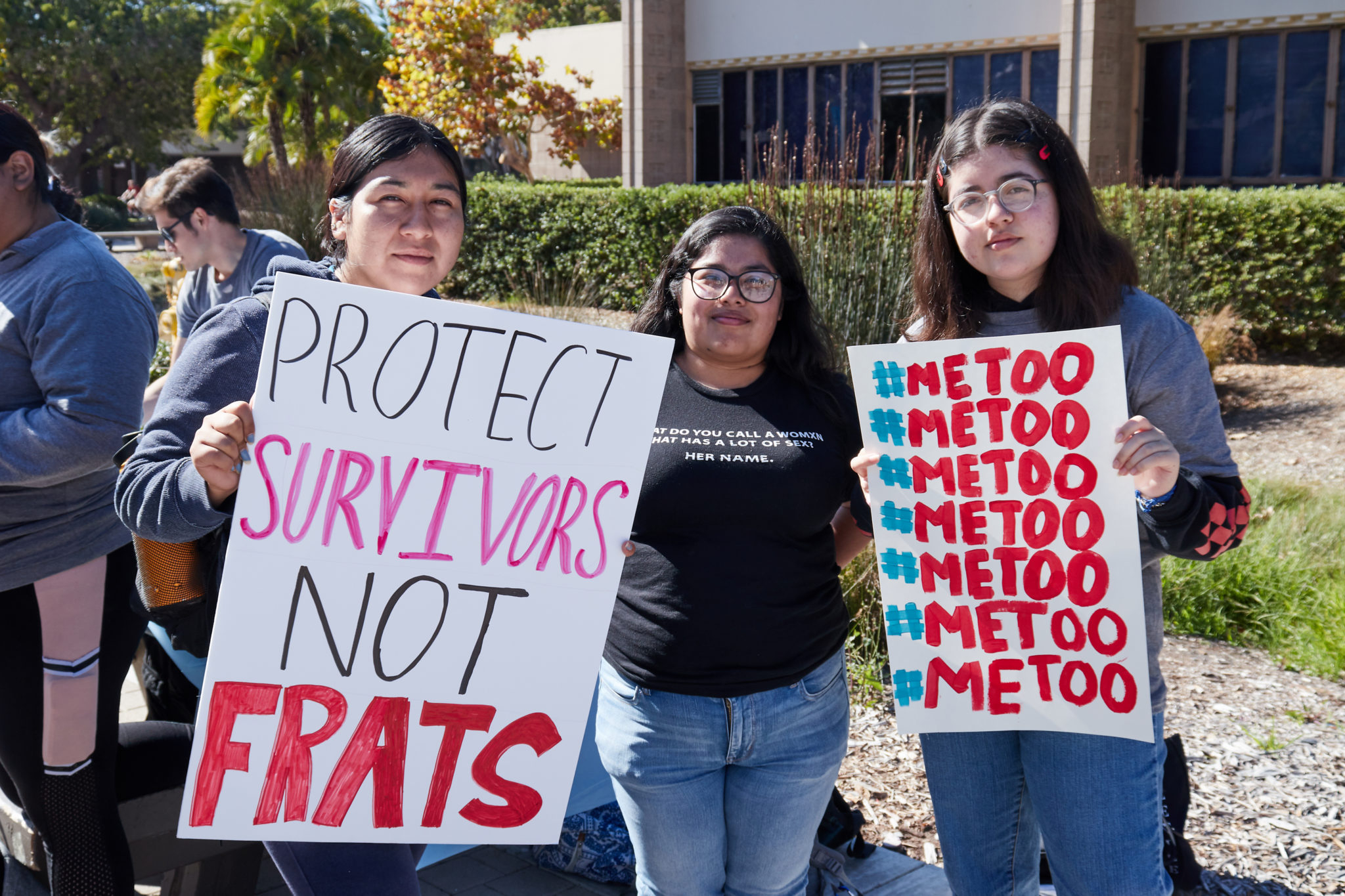 The demands were put together from over 1,000 survey responses from a Google form the organization first released during the demonstration. Devin Ralston / Daily Nexus

The demands were put together from over 1,000 survey responses from a Google form the organization first released during the demonstration, according to Alana Ulloa, historian of Intersectional Feminists.

Ulloa said in October that the organization “really want[ed] to make sure these demands are representative of what the student collective wants.”

The organization plans to present the demands to the university and “see what they try to implement with that,” but Ulloa and President Kyremina Youssef added that they hope to work closely with specific administrators like Vice Chancellor for Student Affairs Margaret Klawunn and Assistant Vice Chancellor for Student Affairs and Dean of Student Life Katya Armistead. The two admininstrators have primarily been the ones communicating with students regarding incidents of sexual violence in the community.

One of the eight demands released on Monday includes formally requesting a statement of acknowledgement “from Sigma Pi and other fraternities involved in recent sexual violence and misconduct apologizing to survivors, acknowledging the perpetuation of rape culture, and denouncing the actions of removed members.”

In October, the Nexus reported that a Sigma Pi member had been removed from the fraternity after the fraternity president learned of sexual assault allegations against the member involving two separate women.

The Nexus spoke with one of the women, who said she reported the sexual assault to Sigma Pi’s president after she learned that the same fraternity member had allegedly sexually assaulted another woman later the same night, Oct. 3. The woman said at the time that she did not file a report with the university or local police.

Later in October, another person reported to the university that they had been raped in a bedroom at the Sigma Pi house. On Oct. 28, UCSB sent out a timely warning regarding the report, but the warning did not clarify if the suspect in the case was a member of fraternity or not.

The UCSB chapter of Sigma Pi has yet to publicly comment on the allegations of sexual assault made against former or current members or reports of sexual assault that have occurred on fraternity property. The national office of Sigma Pi said in October that they had suspended operations at the UCSB chapter while the university and local law enforcement investigated the allegations, but they did not respond to follow up questions at the time.

When the Nexus reached out on Monday regarding the status of the chapter’s suspension, the national office did not respond.

In regards to keeping fraternities accountable, Intersectional Feminists is demanding that, moving forward, fraternity leaders be designated as mandatory reporters “of suspected sexual misconduct under Title IX.” Mandatory reporters, otherwise known as “responsible employees,” are “required to notify the Title IX office if a student brings information about, or an employee becomes aware of, a possible incident of sexual violence or sexual harassment.”

Two other demands on the list address the university’s communication after incidents of sexual violence. The university was criticized in the fall for its slow response to the October reports, after which university officials held a town hall meeting to address students’ concerns.

Another demand calls for a “transparent” Clery Student Right To Know daily log and for a University of California Police Department (UCPD) crime map. While the UCPD currently maintains a daily log of “crimes that have been reported to the University of California Police Department” and a map, Youssef said the organization would like to see more consistently updated versions of both.

The organization is also demanding that campus climate surveys, which survey “faculty and other academic appointees, students, staff, trainees, and post-doctoral scholars about their experiences and perceptions of campus or workplace climate,” be conducted on a more consistent basis and include questions regarding sexual violence that occurred on- or off-campus.

The UC conducted its first system-wide campus climate study between fall 2012 and spring 2013; UCSB was found to have the highest reported rate of “‘unwanted sexual contact’ while at UCSB within the last five years,” the Santa Barbara Independent reported.

In addition to more frequent surveys, Intersectional Feminists wants “relevant student entities or groups” to be able to “review, edit and contribute to the drafting process” of the surveys.

Once conducted, the results must be widely shared and publicized to the student body, the organization said. Jonathan Abboud, the Associated Students President in 2014, criticized the university for not widely publicizing the survey results in an interview with the Nexus after they were first released.

Several of the demands are also centered around safety and assisting survivors; the organization is demanding that the Campus Advocacy, Resources and Education (C.A.R.E.) office has its funding increased to be able to put on more workshops and to hire two “institutionalized” prevention education coordinators.

The final demand on the list calls for “mandatory faculty research on perpetrators, not just survivors.”

Youssef said that demand also came from a UCSB staffer, who is currently conducting research on survivors of sexual violence.

“We want to kind of shift the focus to perpetrators, and why are they doing that,” Youssef said.

“That demand is specifically is shifting towards acknowledging rape culture,” Ulloa added.

Is anyone required to actually comply with these demands?

Lets be honest – nobody raped any of those girls