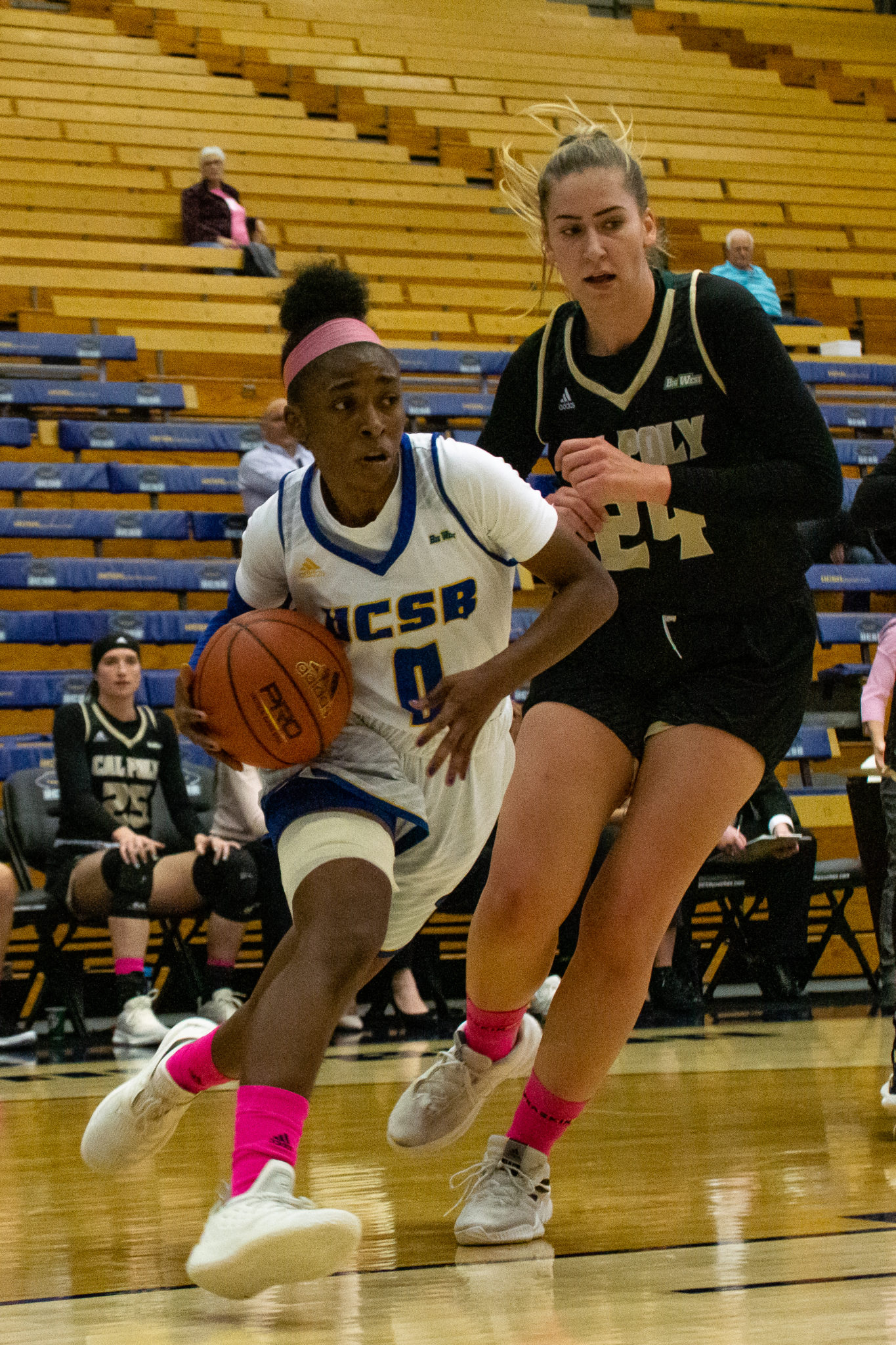 With 15 seconds left on the game clock and the UC Santa Barbara women’s basketball team down by one, junior guard Danae Miller made her move.

Despite struggling with both her shot and foul trouble the entire night, Miller drove downhill, finishing the and-one to give UCSB a 52-50 lead — a lead they would not relinquish in their victory over rival Cal Poly on Saturday.

“We started moving and sharing the ball, so there was room at the rim for [Miller],” Head Coach Bonnie Henrickson said.

UCSB started the game on the front foot, jumping out to an 18-10 lead after the first quarter. Importantly, the Gauchos forced junior forward Sierra Campisano out of the game with foul trouble — something she struggled with throughout the entire night. In total, Campisano logged merely 14 minutes on Saturday, ending the game with two points and two rebounds.

In the second quarter, however, the Gauchos offense struggled to get anything going. With stud freshman Ila Lane in foul trouble, UCSB hemorrhaged points in the paint and struggled to box out the Mustangs. Cal Poly scored their last seven points of the quarter in the paint, and after a dominant first quarter, the Gauchos found themselves down 28-24 at halftime.

In addition to her foul trouble, Lane was kept in check by the swarming paint defense of Cal Poly. While she grabbed 11 rebounds, Lane finished the game with only 2 points — her season low — on 1-4 shooting from the floor.

With very little working offensively for the ‘Chos in both the second and third quarter, the team leaned heavily on the craftiness of senior guard Coco Miller to create offense. Every time the Mustangs threatened to pull away in the third quarter, Coco would hit a 3-pointer to re-energize the Gauchos, including after Cal Poly opened up a 12-point lead. In one of her finest performances of the season, Coco finished the game with 24 of the team’s 52 points, shooting 64 percent from deep on 11 attempts.

Halfway through the third quarter, Henrickson instructed the team to come out in a zone defense in an attempt to force Cal Poly to shoot from distance. The strategy worked to a tee; after trailing 42-30 with 1:53 left in the third quarter, UCSB only gave up eight points the rest of the game.

Most importantly, in the fourth quarter, the sputtering UCSB offense came to life. After entering the game, junior Mira Shulman helped to kickstart the offense by probing and stretching the defense, creating space for the rest of the offense to operate. After a good dish from Coco, Shulman drained a 3-pointer in the corner to cut UCSB’s deficit to six points. Minutes later, Shulman returned the favor, hitting Coco for a 3-pointer that cut the Mustang lead to one point.

“Mira gave us huge minutes today,” Henrickson said. “She was a ball mover when she came on the floor.”

After briefly taking the lead, the Mustangs answered back with a 3-pointer to take the lead with 38 seconds left, 50-49. But Danae gave the Gauchos the lead for good with 10 seconds left on her drive, and UCSB came away with their first conference victory of the season.

“We had a great first and fourth quarter, but we gotta get a great 40 minutes at some point,” Henrickson said.

The Gauchos now move to 6-9 on the season and are 1-1 in conference play. After opening their conference slate with two difficult home games, UCSB will now travel to take on both UC Irvine and UC Riverside this week.