Morphogenesis is one of the most fundamental aspects of development in multicellular organisms. The subdivision of cells in a body to perform different functions and orient themselves relative to other cells is so foundational as to be unnoticeable, flying over the heads of most people.

Planar cell polarity, or PCP, is the polarity axis by which cells are arranged in the tissue along a two-dimensional plane. Liken it to a compass which informs how the placement of a cell dictates what direction it will grow and how this cell likewise dictates how the cells around it grow.

Yet so little is known about how this process actually works. How do the mechanisms and organic molecules that govern morphogenesis interact on the inter and intracellular levels to ensure proper development? What are the rules for planar cell polarity?

Shahriar Shadkhoo, a researcher in UC Santa Barbara’s Kavli Institute for Theoretical Physics, has sought to answer some of these questions through a generalized reaction-diffusion model. In a paper published in the Public Library of Science (PLOS), Shadkhoo laid out some ground rules for planar cell polarity.

“You can go from an almost featureless or at least seemingly featureless, highly symmetrical object … to an organism, which is highly structured and capable of doing many different tasks,” Shadkhoo said, describing the process of morphogenesis through symmetry breaking.

The way in which structural symmetry is broken and complexity forms in an organism depends on the directional instructions given to cells, provided by pathways known as planar polarity pathways. This is carried out through cytoplasmic interactions within the cell and membrane proteins between cells.

“Each cell has a pool of different types of plasma protein. What happens during the formation of polarity is that in each cell individually the proteins that are responsible for providing these kinds of directional information are segregated to the opposite sides of the cell,” Shadkhoo described. 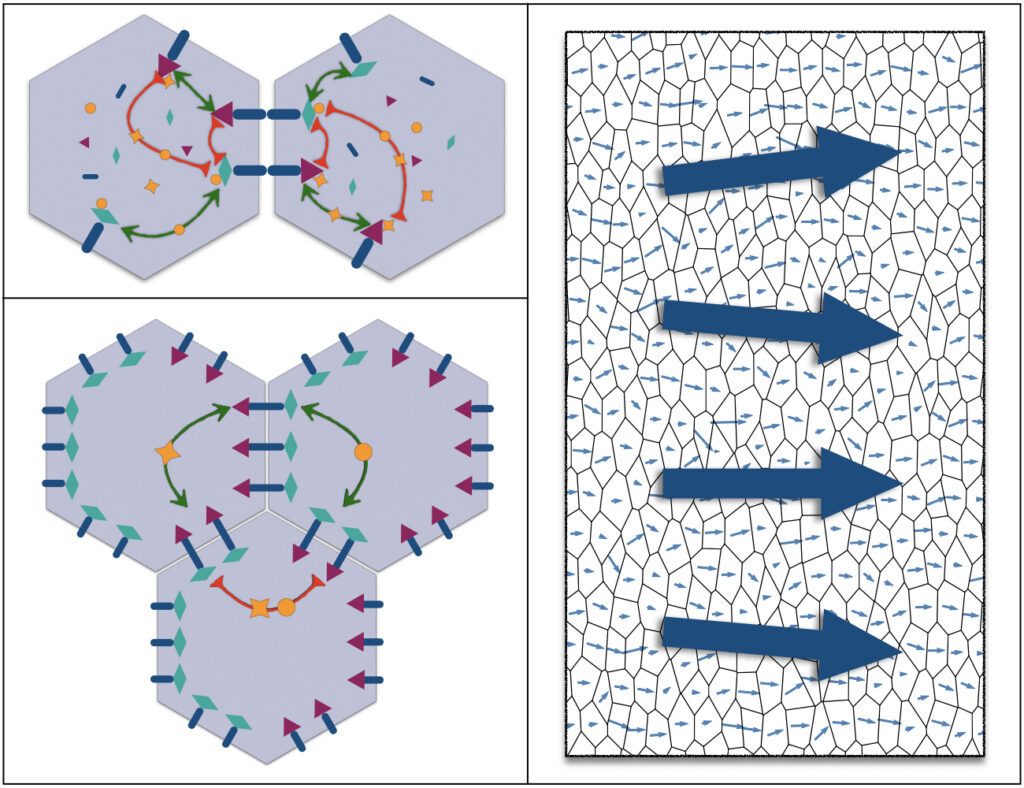 The left panels demonstrate the intracellular interactions among the membrane proteins, which lead to the redistribution of the proteins from an intermixed (top) to a segregated state (bottom). The right panel illustrates the effect of elongation on the direction of polarization. Cellular geometric information like elongation becomes accessible to proteins through the nonlocal intracellular interactions. / Courtesy of Shahriar Shadkhoo

Through the models, Shadkhoo found that the length scale of interactions between plasma proteins influenced the development of the polarity axis across cells.

“What we found was that there is a minimum length scale, the length of interaction must exceed a lower limit in order for the polarity to become established across the tissue,“ Shadkhoo said.

In physics, length scale refers to the order of magnitude by which a function operates. Imagine the function mapped out on a graph. A small length scale would mean a choppy line, with many dips and rises. A large length scale creates a smooth line, with a more cohesive structure and trend in the long term.

Length scale informs a protein’s level of consideration for the prevailing trend amongst others around it.

“So if the length scale of the interactions between the protein are very small, if each protein is only caring about its very, very small immediate vicinity, it would not be able to conspire, I would say, to establish the polarity, whereas if the length scales are larger they are able to interact with each other constructively in a way that gives rise to polarity,” Shadkhoo stated.

In turn, it was found that length scale influences the geometry of cells in other ways too.

“Interestingly enough, this comes with some consequences that are about the geometry of cells,” Shadkhoo said.

Shadkhoo brought to attention the elongation of tissue caused by polarization, observed in animals such as mice and Drosophila flies.

“For instance in mice, what happens is that their body starts growing faster than the tissue and then the tissue is stretched,” he said. “So basically, this polarity is reading out the information of the geometry of the cell which is stretching yourself in that direction. And then the polarity rotates itself perpendicular to that axis of stretching or axis of location.”

“And so, these are, I think some consequences of that link scale that I was talking about earlier. If that link scale is zero or approaches zero and is very, very small, the effect of geometric readout would not appear at all,” Shadkhoo continued.

Thus, a relationship could be established between elongation and the quantifiable value of the length scale. The perpendicular orientation of elongated tissues was not a local effect, but rather a collective one amongst many different cells.

“It was an interesting consequence of the fact that the length scale does not approach zero, but [instead] actually has some finite value. It is larger than point one of the cell diameter. These geometric results are a consequence of this nonlocality of the intracellular interaction,” Shadkhoo said.

That is to say, intercellular and intracellular forces work in tandem throughout morphogenesis, and even compensate for one another.