The Daily Nexus
Opinion
An East Coaster’s Guide To California Winter
December 11, 2019 at 3:07 am by Anabel Costa

It’s that time of year: the local Starbucks is playing Pandora’s Michael Bublé radio station on repeat, Tastemade is coming out with cookie decorating hacks that will inevitably leave you feeling incompetent and a third “A Christmas Prince” movie has just been released. Ah yes, the most wonderful time of the year. It truly is.

As someone who grew up in Massachusetts, no amount of pumpkin spice can alleviate the winter blues I feel from October through December. I long for the bright orange, red and yellow leaves that paint the sidewalks of my childhood. I miss going through the box of winter clothes and pulling out my favorite scarves. Earmuffs, ski masks, gloves and long johns did more than just keep me warm: they signified the changing of the seasons, something that just doesn’t happen in California. 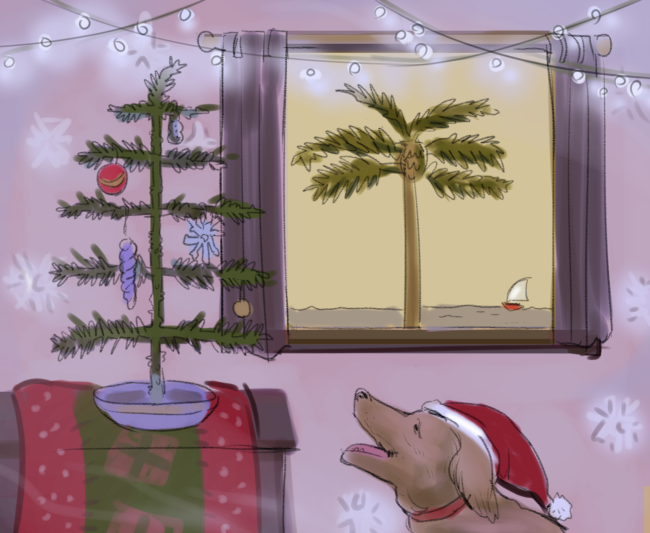 I can burn my Bath & Body Works Vanilla Bean Noel candle all I want, but even the most festive scents can’t replace the true coziness of frigid temperatures and crackling fireplaces. Despite the moderate temperatures and the lack of snow, with the right attitude, winter in Santa Barbara can be made bearable.

Despite my lament, even I, a winter purist, can acknowledge some of the perks of spending the winter months on the west side. So for anyone else who has known the joys of an East Coast winter and is feeling a bit apprehensive about the prospect of a California holiday, here’s a quick guide to help you cope:

So, there you have it: these are some of the things that have helped me through the season until I get to return to my icy home for winter break. Of course, there is nothing wrong with California winters (most probably prefer it); I just can’t seem to get used to the palm trees and snow-less landscapes come November. But wherever you are this holiday season, I hope it delivers on the promise of being the most wonderful time of the year.

Anabel Costa wishes everyone a frosty winter and a happy holidays.