The Daily Nexus
Science & Tech
You Reef What You Sow: Coral Reef Management and Status in a Warming World
November 21, 2019 at 2:00 pm by Sean Crommelin

Undersea lands of superlatives, marine coral reefs are believed to be the most biodiverse ecosystems on the planet — even surpassing tropical rainforests. They provide for humans: Reefs rake in tourism dollars, support fisheries that hundreds of millions rely on and buffer vulnerable coastal regions from large storms.

They are also dying almost everywhere. 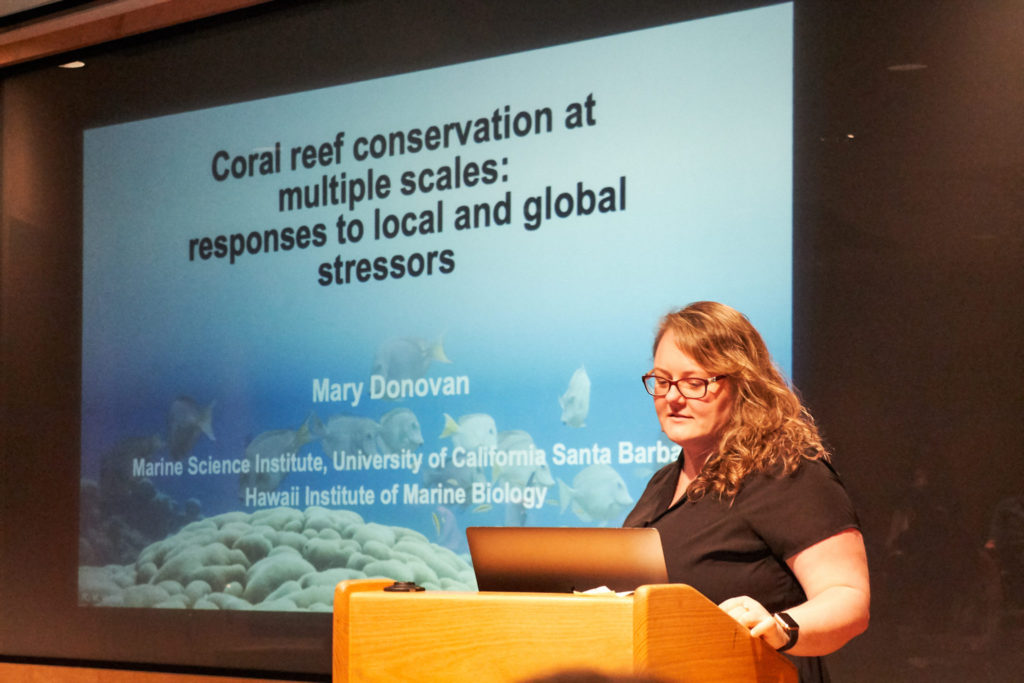 On Nov. 18, UCSB postdoc researcher Mary Donovan discussed her research on declining coral reefs around the world and the various scales of management which localities use to manage and protect them. / KIAYI YANG/ DAILY NEXUS

On Monday, Nov. 18 in the Marine Science Institute Auditorium, the lab of ecology, evolution and marine biology professor Deron Burkepile invited Dr. Mary Donovan to discuss her research on declining coral reefs around the world and the various scales of management which localities use to manage and protect them.

An alumna of UCSB, Donovan traveled to Hawai’i after obtaining a B.A. to complete her M.S. and Ph.D. at the University of Hawai’i at Manoa. She has since returned to UCSB as a postdoctoral researcher. While in Hawai’i, she led a project to compile coral reef-monitoring data for the archipelago.

“Many reefs around the world are losing ecosystem function and declining to degraded states with a loss of coral cover, less fish and the proliferation of algae,” Donovan said.

The presentation focused on three regions in particular: Moorea in French Polynesia, the Caribbean and Hawai’i. The presentation also examined the interrelations of different stressors — such as heat stress, land pollution and coastal development — causing bleaching events and coral die-offs.

Marine heat waves have increased in frequency and duration across the globe, which has led to extensive coral bleaching and mass die-offs.

“[Large bleaching events] used to happen, like in decadal intervals, typically associated with really large El Ninos like in 1980. But because of climate change, these heat waves are occurring more frequently, often every three to five years,” Donovan said.

“This enormous threat from climate change is occurring against the backdrop of all these other threats that have been plaguing reefs for decades, so this creates a major challenge as all of these threats vary in spatial and temporal expanse.”

Alongside the science, Donovan brought to attention the varying ways in which the scales of management overlap. The jurisdictional boundaries involved in the protection and management of coral reefs are not cut and dry. It can be difficult for those involved in management to reconcile the fact that environmental issues transcend region and locality.

“There’s sometimes a debate about whether or not the management actions that they can implement at a local scale are going to make a difference. This is particularly true because risk management is often limited in capacity and in budgets. This forms the overarching motivation on my research, which is how do we make the best decisions for conservation given that, in an ecosystem, there are multiple threats operating at different scales?”

Moorea, a coral atoll located in French Polynesia, has been an area of focus for researchers hoping to untangle the variables which are responsible for coral decline, namely heat intensity and land-based pollution.

In one particular study, researchers observed the variable levels of bleaching which occurred in two coral taxa: Acropora and Pocillopora. They examined the conditions of various sites relative to one another according to heat stress and nitrogen, which was present due to runoff from land.

“What’s really interesting is that when temperature is moderate or low you see a significant positive relationship between nitrogen and bleaching severity, meaning that at the highest levels of nitrogen we’re gonna see more severe bleaching, even if the temperatures aren’t as high,” Donovan said.

This effect was observed in both coral taxa.

“Why this really is important in the context is that we talked about how bleaching is becoming more frequent. As we see these more frequent events, we’re going to see these low to moderate levels of heat stress much more often.” 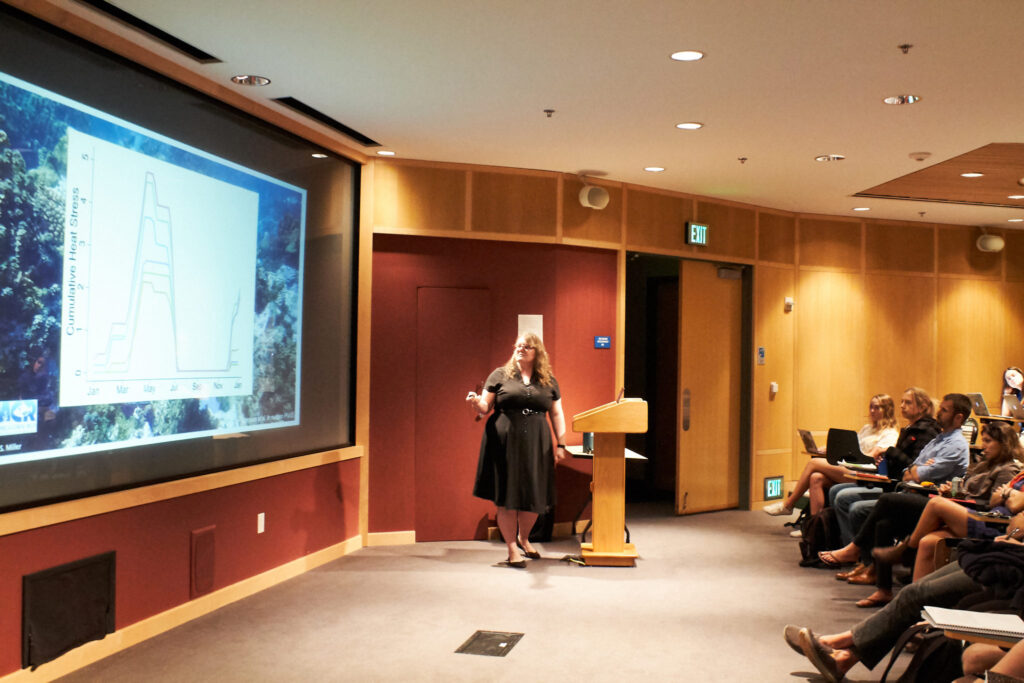 In the Caribbean, Donovan has done work with the Global Coral Reef Monitoring Network, gauging the status and trends of Caribbean coral reefs.

She described a long-term study looking into the status of reefs in relation to other fauna in various Caribbean reefs which found links between the extent of coral cover and the population of parrotfish.

“We categorized locations whether or not they had low parrotfish, kind of implying that fishing was reducing parrotfish populations. We categorized places into these two groups, and then we look at their trajectories of coral over time. We [found] some interesting patterns,” Donovan said.

There was a decline in coral cover everywhere. However, it was observed that in regions with an intact parrotfish population there was much greater variability in the condition of reefs, while regions with less robust populations were almost always in very poor condition at the end of the period.

Donovan ended her talk by delving into her work in Hawai’i. She has led the Hawaii Monitoring and Research Collaborative, a “project to collate existing data on underwater visual censuses of both benthic and fish assemblages into a unified database,” according to Donovan’s website.

In doing so, Donovan and her researchers aim to provide a frame of reference which localities may reference in order to better their management practices.

“We’re working with local managers to provide a way forward and how we can make the best decisions given all this complexity,” Donovan said.

Natural variation in the ocean around the Hawaiian Islands makes qualitative evaluations of reefs difficult. The conditions of a site, which exists because of its location and natural coral cover, will change how metrics such as fish biomass and change over time will apply to a site’s evaluation.

“Understanding the natural bounds of the system is important for differentiating human-driven and natural-driven changes in the environment.”

However, all of these variables must be considered if one desires to paint a clear picture of the ecological condition of reefs across the archipelago — and worldwide.

“I started off asking, do local and global pressures interact? And I think we can safely say yes.”

Now, one must consider, “How do we make the best decisions at local levels…  and in the context of local environmental variation and human variation?”