The Daily Nexus
Opinion
Unexpected Life Lessons From my Shitty Manager
November 21, 2019 at 8:00 am by Jennifer Sor

When I first met Rob*, my manager, the first two things I noticed were his hair loss (severe) and his handshake (uncomfortably tight). “My name’s Rob,” he said, gripping my palm. “My wife is Asian, like you.” He gestured to a box of Thin Mints on his desk. “You want a cookie? Take one, I’m prediabetic. My wife is going to kill me.”

“No thank you,” I croaked. A week ago, I responded to a job listing on the website “Indeed”, and lo and behold, I was now a Working Woman™️. Who could have guessed? I was 16, had no work experience, and I printed out my resume in size 18 font. Somehow, they wanted me.

Rob looked at me skeptically and pointed an unclipped fingernail in my direction. “Let me tell you, Jenn, I’m going to teach you a lot in this office. No lie.” 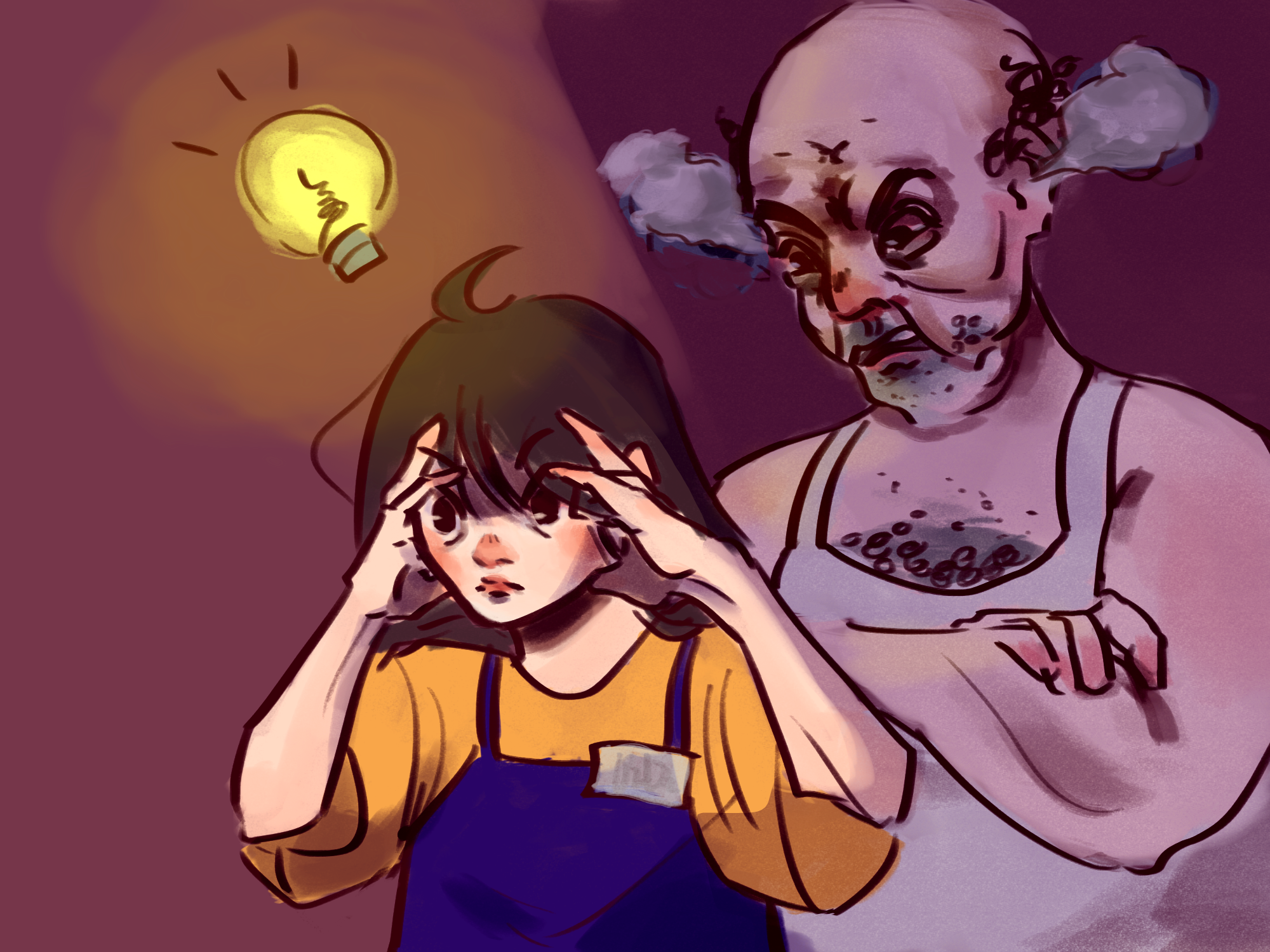 During my employment, Rob actually ended up lying to me about a lot of things, but that was the most truthful thing he ever said to me. He was, without contest, the shittiest manager I’ve ever had, yet I don’t think anyone has taught me more about life, respect and professionalism.

I feel bad for writing that. I feel like it’s disrespectful to my parents, my K-12 teachers and everyone else I should be attributing my wisdom to, but unfortunately, Rob reigns at the top of all my educators. From what I’ve found, this isn’t an uncommon experience for people who have been employed by terrible managers in the past. For instance, one of my friends suffered a nervous breakdown because of her supervisor at the In-N-Out drive-thru. Years later, she still can’t help but think of her manager fondly.

“I learned a lot from that job,” she told me. “You can’t forget about your old managers, right? That’s like forgetting an ex. There’s just something about putting up with someone’s bullshit that makes you into a better person.”

For me, this manifested in the form of Rob, a white man with male pattern baldness and mild insulin resistance.

What kind of bullshit did I put up with? For one, Rob rarely paid me on time and even to this day owes me over $400. He was prone to violent mood swings, and once hurled a chair at our marketing intern for making decaf coffee instead of regular.

During my employment, he tasked me with a number of things that were not in my job description, one of which was calling a local Panera Bread and asking for their operating hours. He asked me to email him a list of massage parlors within a five-mile radius that offered “happy endings,” and — the dumbest of all his requests — he asked me to climb onto the roof of our office building and set up a reindeer display for Christmas. I complied with all of these orders.

Rob was a trust-fund baby, a misogynist and an abhorrent racist. “You’re so quiet and polite,” he said to me on my second day. “Is it because you’re a girl or you’re Chinese? I don’t like to hire either of those very often.” Unsure of what to say, I smiled nervously, and felt my stomach churn the entire car ride home.

When I tell people about Rob, they often ask me why I put up with him for as long as I did. Truthfully, I just never had a job before. I was 16. This was a period of my life when I would cry if another car honked at me at an intersection. I smiled nervously at everything.

For me, the turning point was when Rob called me into his office. I was tasked with emailing a client and had made a minor error. I clasped my hands behind my back to stop them from shaking.

“You never never never EVER write that in an email!” he shouted, slamming his hand down on his desk.

I flinched, unable to make eye contact. “I’m sorry. Should I-”

“I’m really sorry,” I said and excused myself, as I felt my stomach churn again. I ran out into the parking lot and threw up in an industrial-sized trash can. When I was done, I sat down and held myself for a while. Why did work always make me feel so sick? I felt every one of Rob’s insults lodged in my throat. Why did it matter so much to me?

It was then that I first realized that I was being chronically disrespected at work and my methods of coping (smiling nervously, throwing up) weren’t cutting it. I couldn’t keep working for someone who treated me like that if I couldn’t stand up for myself. It was there, sitting next to my own vomit, where I realized my efforts to be polite and acquiescent were only hurting me in the end. I felt so sick not because of the way Rob treated me, but because of the way I was treating myself.

Was I willing to stand up for myself? That would mean saying no the next time Rob wanted me to heat up his Cup Noodles. It would mean telling Rob how hurtful his comments were and dealing with his ensuing temper tantrum. Was I brave enough for that? And if I couldn’t stand up for myself, was I willing to leave? It occurred to me I would be so much happier if I accepted that Rob was probably never going to respect me, and that if I wanted to feel better I would have to take measures to respect myself.

In the following days, I sent in my two weeks’ notice and was fired on the spot. I was told that my final paychecks, which amounted to several hundred dollars, would be mailed to me. I have yet to receive them, but in all honesty, I never expected to.

“You can’t just forget your shitty manager,” my friend likes to say. Fair enough — how do you forget about someone who made you so miserable and, strangely, taught you so much about yourself?

Without ever meaning to, shitty managers have a way of giving cryptic pieces of advice to their employees. Think of it as a maxim from the universe: Your manager’s antics — yelling, manipulation, passive-aggressive behavior — are heavily disguised and uncomfortable to hear, but in the end, important lessons to learn. It took me over a year to fully unravel what Rob was trying to teach me. I’m just grateful it didn’t take any longer than it did.

I firmly believe that everyone will encounter a shitty manager at one point in time. It’s a rite of passage, like having your first kiss, passing your driver’s license test or finally learning how to run a load of laundry. Are you truly an adult if a man you hardly know hasn’t verbally assaulted you?

Jennifer Sor is a second-year who still occasionally cries when cars honk at her.

Great article – my first boss was an A-Hole and I learned a lot from him. Was this job in California? When terminating an employee involuntarily in the great state of CA, the employer must give the employee their final paycheck at the time of termination. Sounds like this company was breaking all sorts of laws.