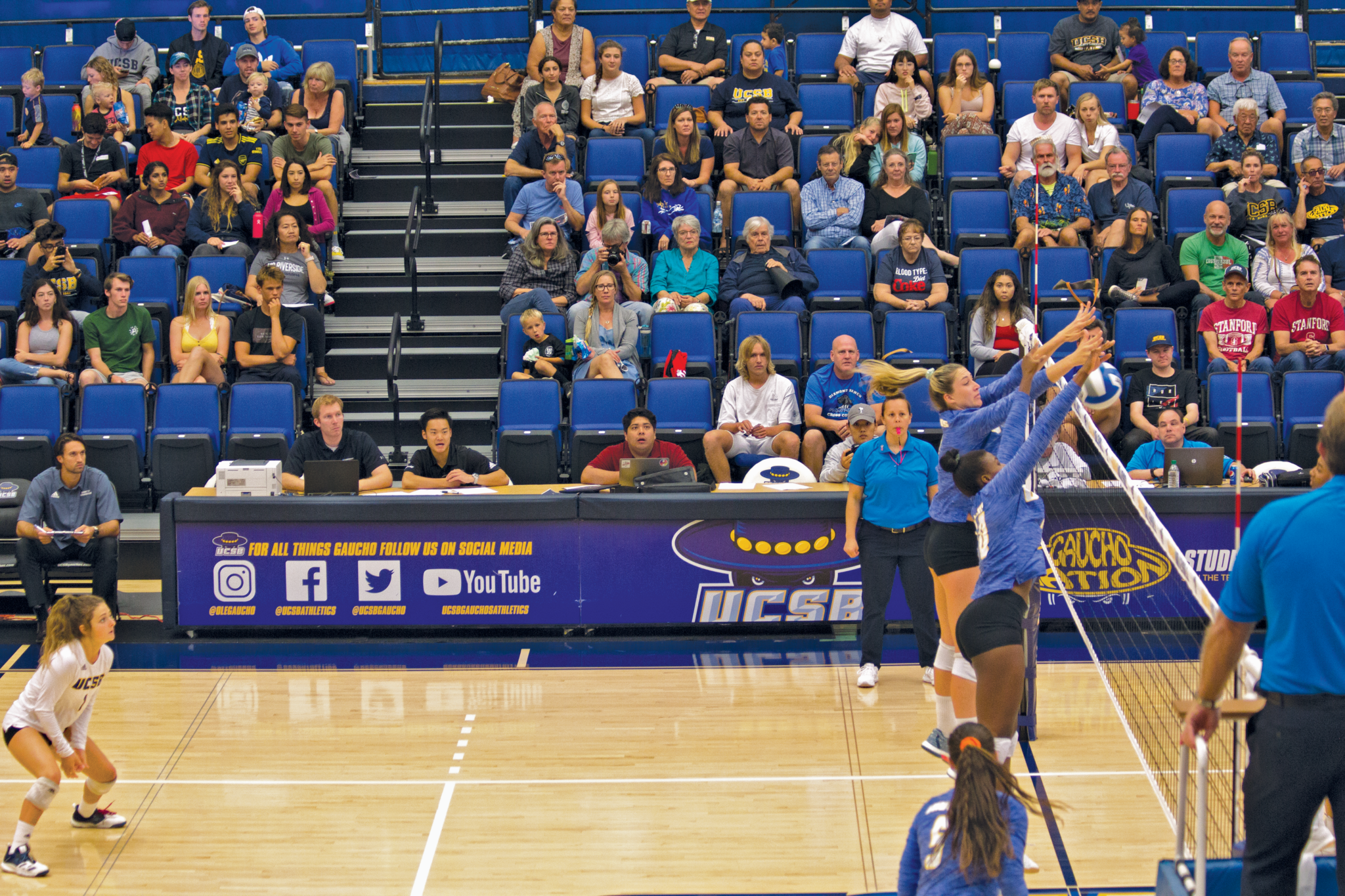 The UC Santa Barbara women’s volleyball team will look to finish strong against Cal State Fullerton and UC Irvine after having dropped one of two this past weekend.

Despite losing a crucial match to Long Beach State on Friday, UCSB saw a Saturday win over CSUN that marked Nicole Lantagne Welch’s 100th career victory as head coach of the Gauchos. She’s currently in her seventh season in charge after having spent the previous 12 at Miami.

UCSB will return home for their games against Fullerton and Irvine this Friday and Saturday after a less than favorable weekend that saw the Beach clean up their sand with a 3-0 sweep over the Gauchos.

It was a valiant effort from UCSB at the Walter Pyramid, but Long Beach’s Carly Aigner-Swesey dished out 38 assists and Tia Chavira had 14 kills off a sparkling .375 hitting percentage to seal the deal.

Earlier last week was when I argued that Kashauna Williams, who leads the Beach with 419 kills, would have to be shut down if the Gauchos were to win this game.

Well, they shut her down to say the least as she was held to 11 kills and a measly .069 hitting percentage, but that was evidently not enough as the depth of Long Beach shown through.

Chavira is seventh on her team in kills and simply dominated at the net on Friday. How’d it happen?

Unsurprisingly given their track record this season, but surprisingly given the final score, UCSB led the game in digs 54-51. It was neither a huge lead nor did it really define the team’s overall performance on the court, but it did reveal that perhaps the Gauchos are not as clinical as we thought.

The Gauchos were just a sniff better foundationally, keeping the ball alive consistently throughout the game. Where they failed was in connecting the last few dots, ultimately committing 8 more errors on their way to putting points on the board .

The aforementioned Aigner-Swesey and her 38 assists led the way for a 43-34 lead in the assist department. It was just too easy for Long Beach State to finish given her consistency in putting up perfect balls.

The Gauchos reacted well, however, making sure not to leave their own brooms at home this time and sweeping CSUN the very next day.

Tallulah Froley had 13 kills, Olivia Lovenberg plated 22 hotcakes, Zoe Fleck dug it out 19 times and the Gauchos made easy work of the CSUN Matadors in a 3-0 sweep at the Matadome.

The win snaps a season-long, 3-game losing streak for UCSB, who have also now won their 20th game of the season for the first time since 2009’s 22-win campaign.

Gaucho Rowan Ennis should be proud of her rebound performance in Northridge, having finished with 12 kills and a remarkable .526 hitting percentage after an abysmal Friday that saw her post a -.600 kill rate thanks to her lack of kills and 3 errors.

UCSB out-hit CSUN in every set, finishing with a .248-.175 kill percentage advantage.

It was a back-and-forth affair with UCSB being mostly a step ahead. The Gauchos were able to see it through, piecing together one or two significant runs in each set in an effort to tighten their stronghold.

UCSB will play host for their last two remaining games this weekend. Cal State Fullerton comes to town Friday night while UC Irvine will make the drive on Saturday.

Fullerton is currently in seventh place in the Big West with a conference record of 4-10. They are 12-13 overall, but that serves to prove more about their shortcomings in the conference.

The Big West seems to be too much for Fullerton this year around, as they were swept by the Gauchos at home earlier this season.

The Fullerton Titans are led by Julia Crawford and her 342 kills, but the offense just doesn’t have the same firepower as UCSB’s. Crawford has also only hit .208 this season, but on the bright side, she is only a freshman and she’ll have plenty of opportunities to grow.

Gaucho Lindsey Ruddins only has about a single game’s worth of a kill advantage at 368, but Froley has 259 in second-place, which is 97 more than that of the Titans’ second-leading scorer Felicia Marshall.

At this point in the season, there’s no reason to expect anything less than a Gaucho victory.

UC Irvine comes to town as losers of 13 of their last 15 games, including an 8-game losing streak that recently ended with their 3-1 win over UC Riverside.

Unfortunately for the Anteaters, who aren’t vying for anything other than last place, they followed up that win with a 1-3 loss to UC Davis.

They are now set to finish the season off as the visitors to Cal Poly and UCSB.

UCSB swept Irvine 3-0 earlier this season with a 75-51 scoreline over three sets. That’s one point off an entire set’s worth of points.

Ruddins only shot for .161 that game, while Anteater Abby Marjama tied her for the game-high kills with 10.

The Gauchos found victory in the power of composure and foundation, finishing with advantages in errors (13-20), digs (46-38) and solo blocks (3-1). Those kinds of numbers, combined with Ruddins’ poor night, led the Gauchos to win over the Anteaters and finish with more kills (44-25) and assists (40-22).

Expect much of the same, if not more, from Ruddins and co.

Fullerton will face everything the Thunderdome has to offer this Friday, while UC Irvine will be in town Saturday. Both matches will kick off at 7 p.m.