The Associated Students Senate unanimously passed a resolution supporting the impeachment of President Donald Trump during its Wednesday evening meeting, moving to Corwin Pavilion from its regular meeting place to accommodate a “potentially larger crowd,” according to the resolution’s author. 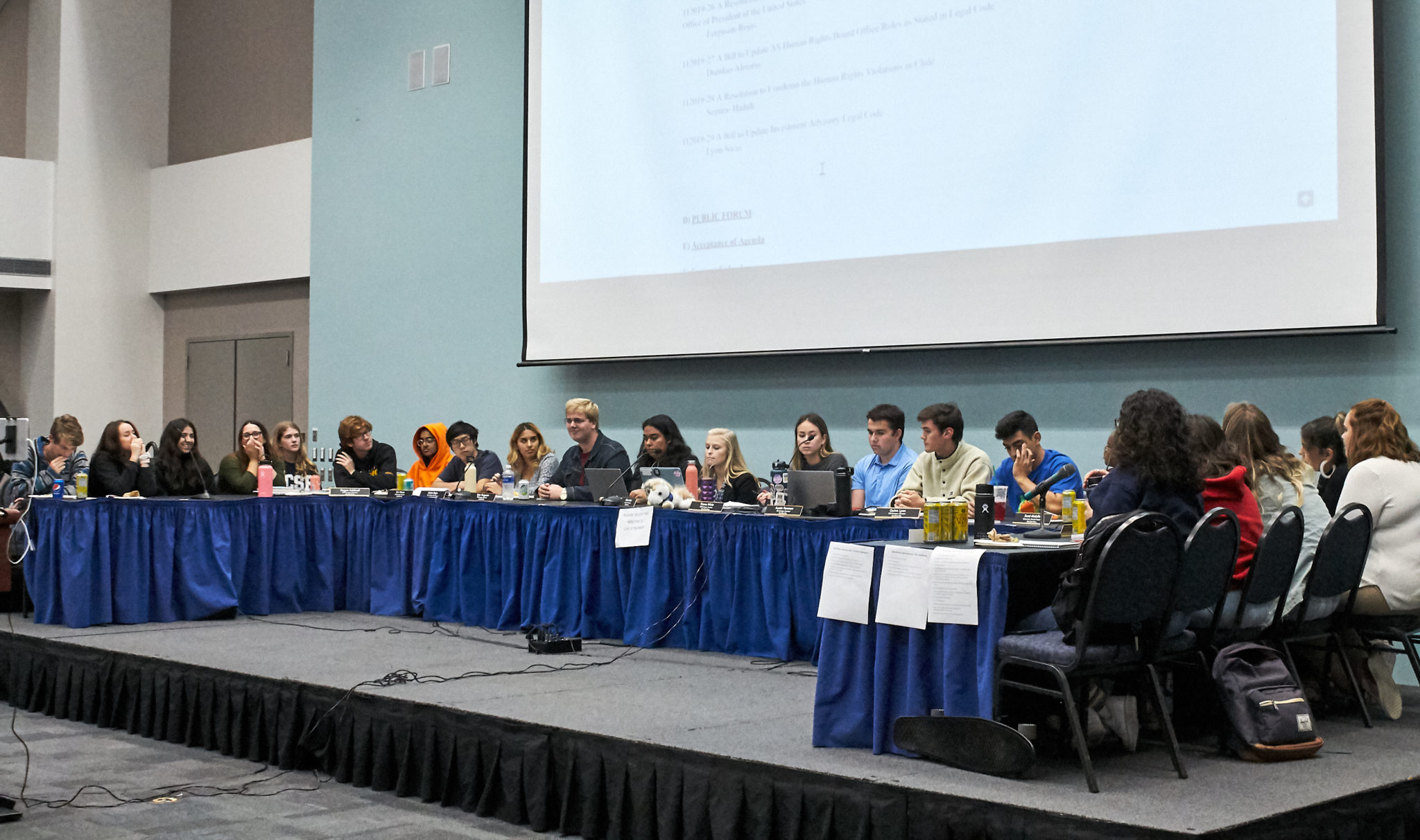 The Senate met on Wednesday night in Corwin Pavillion instead of the Flying A Studios Room. Kaiyi Yang / Daily Nexus

The resolution, titled “A Resolution in Support of Impeaching and Removing President Donald J. Trump from the Office of the President of the United States,” was authored by Off-Campus Senator Tyler Ferguson and seconded by On-Campus Senator Adalis Rojas. It calls on the 70th Associated Students (A.S.) Senate to support the “impeachment and removal” of President Trump from office.

Prior to the meeting, A.S. Executive Director Marisela Márquez said while there is “no way of knowing” the size of the crowd for Wednesday’s meeting, the Senate generally moves to a larger space when it is “a kind of topic that very likely people will want to comment on.”

While Senate leaders expected a larger crowd due to the nature of the resolution’s topic, approximately 20 people were present for Wednesday’s meeting — a number which decreased to approximately five by the end of action items for the meeting.

“I have heard from many students that this resolution is important to them and that they support it,” Ferguson said in an email. “They have said that President Trump’s actions affect all of us, and they have emphasized the importance of holding our President accountable.”

“As a Senator, I have the duty of representing my constituents with diligence and intention. I feel that it is my duty to express my support for the impeachment of President Trump, as his actions affect my constituents lives.”

The resolution also discusses the whistleblower within the Trump Administration who came forward in August with concerns about a call between Trump and Ukrainian President Volodymyr Zelensky. The whistleblower accused Trump of pressuring Zelensky to gather damaging information on 2020 Democratic presidential candidate and former Vice President Joe Biden and his son Hunter Biden, according to the resolution.

The resolution calls Trump’s alleged actions “illegal” and writes that it is “Congress’s duty to impeach a President who commits high crimes and misdemeanors while in office.”

Ferguson emphasized in his email that he believes the Senate has a “moral responsibility” to pass the resolution and set a precedent for action on future national political decisions.

“With a school as politically engaged as UCSB, I think there is an importance of taking stances on major political issues like this,” Ferguson said. “I do believe the majority of the student body would support passing this resolution.”Through the passage of the resolution, Ferguson believes Senate will continue passing more resolutions around national political issues in the future.

The resolution can be viewed in full here.

but on what grounds? The official inquiry doesn’t even have enough hard data yet. This action seems subjective and ideological.

These brainwashed leftists aren’t going to let facts get in there way.

The irony is thick with this one.

Grandiose pampered children, sounds like the AS is in the minority, there isn’t even an impeachment yet ! They need to foment more grass roots . Isn’t the AS subject to impeachment (individually ?) Aren’t they in collusion with this coup? Just say’n

No. You are not “just say’n”. You are belching up a non sequitur.