On Wednesday, UC Santa Barbara’s administrative services hosted a town hall for faculty and students to give feedback on tentative renovation plans for campus transportation services, including the removal and rerouting of certain bike paths and proposal of a shuttle system. 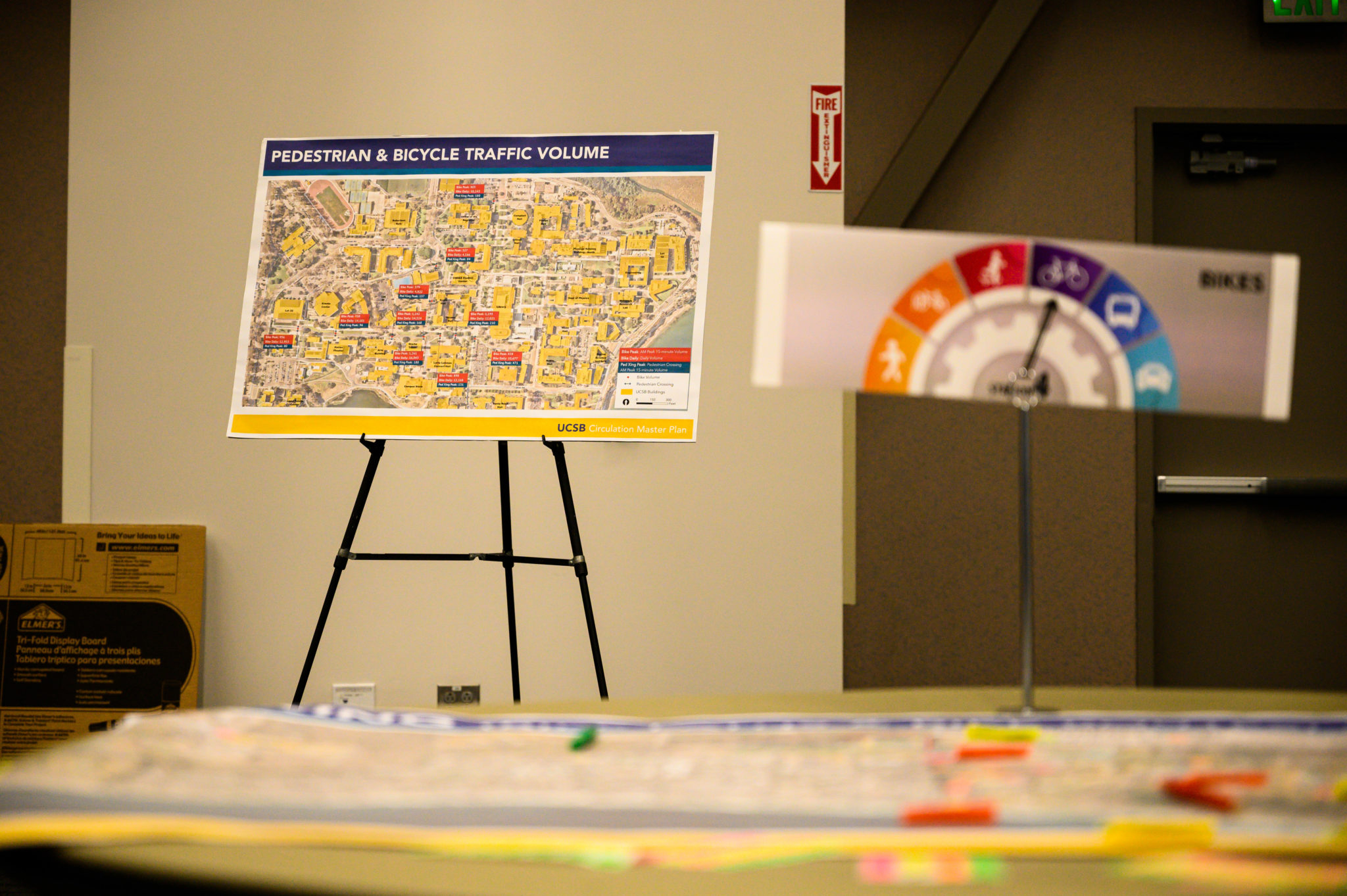 The town hall gave planning services company KTUA  — which provides analysis and improves landscapes and transportation systems — an opportunity to share its concepts for redesigned UCSB transport, which will be implemented in the coming years to accommodate several new campus buildings.

However, despite a call for student voices to be involved in the new design, only six UCSB students attended the town hall when “we would have liked two hundred,” Tom Bertulis, a senior transportation engineer with KTUA, lamented.

One community member spoke out about the lack of student voices at the event.

“You think that students have the time to come to a two-hour meeting? Students are very busy, and that’s why they can’t come. If you need them to answer these questions, maybe email them,” he half-jokingly told the crowd.

As Bertulis began his presentation, he touched upon UCSB’s recent platinum-level bike friendliness designation, noting that UCSB is one of eight colleges in the nation to receive it and emphasizing the campus’s “unique bike culture.”

“Here, there are almost 1,300 bike trips in a peak 15-minute period. I’ve never seen anything like this… there are definitely unique challenges this campus faces in regards to bikes. Even a freeway can’t handle that many cars in such a short period,” Bertulis said.

Alissa Hummer, director of Campus Planning and Design, explained the campus expansion that the renovated transit plans are meant to address, which include the construction of a new lecture hall that will begin within the next one and a half years, with 540 new faculty residences and a new student housing project in the near future.

“Do we need to not have people bike on the interior of campus and just put bike racks on the outside?” Hummer asked. “It’s something to consider. At this point, everything is on the table.”

The new lecture hall, which is being built to accommodate increased class sizes, will most likely divert bike traffic onto UCen Road, she explained.

“I think students understand the constraints of building a new lecture hall, but they understandably have some trepidation. We haven’t yet tried to mix bikes and cars in the same transport lane, but it will only be for about a block,” Hummer said. “In addition, we will most likely need new bike paths coming into the western side of campus to accommodate the new housing.”

The prevalence of campus biking is why second-year environmental science major Sophie Roberts, a member of the A.S. Environmental Affairs Board, decided to attend the meeting.

“I think it’s important to maintain the bike paths that we have, and even add new ones because there’s so much bike traffic here already that closing paths could be dangerous,” she said.

“For example, I have a class in the Psych Building, and then 10 minutes later I have a class on the other side of campus, and it’s physically impossible for me to get there by walking, which is why it’s so important to me we keep the bike paths.”

Alex Samarin, a KTUA consultant, emphasized wanting to clear up misconceptions students might have about the remodelling and removal of various bike paths.

“The university has proposed some things, which are at this point just proposals. We’re here today to listen to feedback and see how people feel,” Samarin said.

“In regards to closing bike paths, that would be for paths that are underused. We might be able to repurpose those for shuttles. It’s not removing paths just to remove them, it would be to accommodate other mobility,” he added.

Bertulis also brought up the idea of autonomous campus shuttles known as Neighborhood Electric Vehicles, which are futuristic-looking white shuttles that could hypothetically transport students to opposite ends of campus and provide an alternative mode of transport for students who have trouble walking across campus.

“I was speaking to someone who represents the disabled population on campus and currently we have Uber and Lyft reimbursement for students who need a shuttle type of service. But we’re looking at more regular type of shuttle that could come more regularly and serve a larger demographic, if there’s demand,” Samarin explained.

Making campus transportation more accessible for disabled individuals was a key point throughout the moderated conversation at the town hall. Currently, making sure handicapped individuals have the transport services they need is one of KTUA’s “number one priorities,” Bertulis said.

By the end of the town hall, Hummer ended her conversation with a question for students and staff alike.

“We really have to look at this bike system that was never formally designed but was put together piece by piece by piece. We need to look at how it’s circulating. Are the bones of this system good and just need some tweaking, or is it fundamentally broken and we need to retool it all together?”