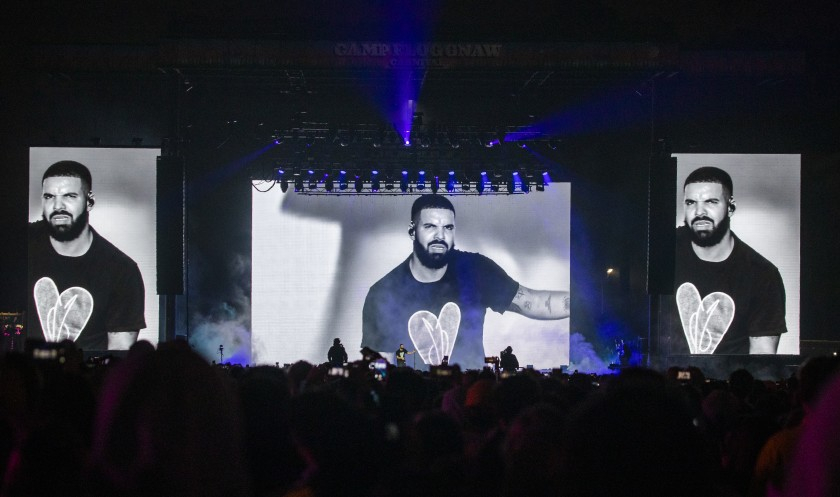 Tyler, the Creator brought weirdos together for the eighth year at his annual Camp Flog Gnaw music festival, giving fans a weekend of seesawing emotions. Flog Gnaw took over Dodger Stadium for the second time, wrapping up Tyler’s most successful year, after his latest project “IGOR” reached No. 1 album in the country. However, the customer satisfaction rate was not at 100%, with fans still asking “Where’s Frank?” at the end of the festival weekend.

Arriving at Camp Flog Gnaw this year was no different than the year preceding it. With a lineup geared toward the R&B genre, the festival was host to thousands of youthful attendees all dressed in their finest attire, with no two outfits being the same. The dedicated music fans all rushed in as the doors opened, already wrapped up in the spirit of the festival. The rest of the crowd could be seen taking out their small Ziplocs of fun-colored pills, powders, puffables and other precious paraphernalia from their bags after clearing security.

Once the business at security was handled, fans were able to enjoy their trip at a festival-goers wonderland, complete with the usual games, rides, merch stands, a PopTarts party and plenty of photo opportunities. Attendants were set free to stomp and stumble around the grounds, gawking at the wide spectrum of color and sound that the festival had to offer, with plenty of medical tents throughout the venue.

On day one, crowds could be seen growing in size around the time of Thundercat’s set, five hours after the doors opened. By then, the crowd was at a comfortable level with their inebriation — heavy-eyed, heavy-armed and ready to digest the music of some of the industry’s most talented artists. Thundercat gave the crowd what they needed, delivering funky yet hectic, jazz-fusion tunes, dedicating a couple to his cat and one to his late friend and acclaimed rapper Mac Miller.

The Internet was up next and supplied audience members with an enchanting journey through neo-soul performed in front of a sunset, which was highly fitting for their soothing melodies. Summer Walker followed in the schedule, bringing along not one but two pole dancers to accompany her sexy and provoking ballads. She even invited a couple of fans on stage to work the pole and show what they had. Daniel Caesar soon hit the stage, singing his pain away through highly personal and intimate lyrics, executed with a stunning vocal performance.

Five minutes after his set, it was Tyler’s turn. He proved to be a good host, giving everyone a theatrical set complete with spark showers to fit his grand productions. But the night didn’t end there, with 21 Savage bringing his aggressive and violent flow to the show, at one point displaying a short video which followed his previous deportation to the UK. After moshing to 21, fans spent the comedown listening to Solange’s sweet songs, taking in the final energies of night one.

It was time for day two, and there was still the lingering question of who was going to be the final headliner, with our only official clue being three taunting question marks. Still, there somehow seemed to be an agreement among everyone that it was going to be Frank Ocean.

Attendees suppressed their Frank Ocean anticipation and trekked on through day two, with Blood Orange being the first artist to draw in a huge crowd. Taking his musical mastery with him on stage, he not only sang but also frequently alternated between playing intense guitar and upright bass solos.

Brockhampton was after, performing inside a living room set with an airplane crashed through its wall, bringing the boy-band bops that the group is known for. Following that set, the night was about to gradually slip its way into controversy starting with YG’s set as he brought out special guests like Shoreline Mafia, DJ Mustard and Tyga. However, his most exciting guest was introduced with his anti-Trump anthem, “FDT.” YG brought out Trump’s alleged ex-lover, Stormy Daniels, to share a few unfavorable words about the POTUS, ending with a collective “Fuck Donald Trump!” from the crowd. After YG, fans were ready for the answer to the mystery of the final Flog Gnaw headliner, many sending in their final prayers that it would be Frank Ocean. 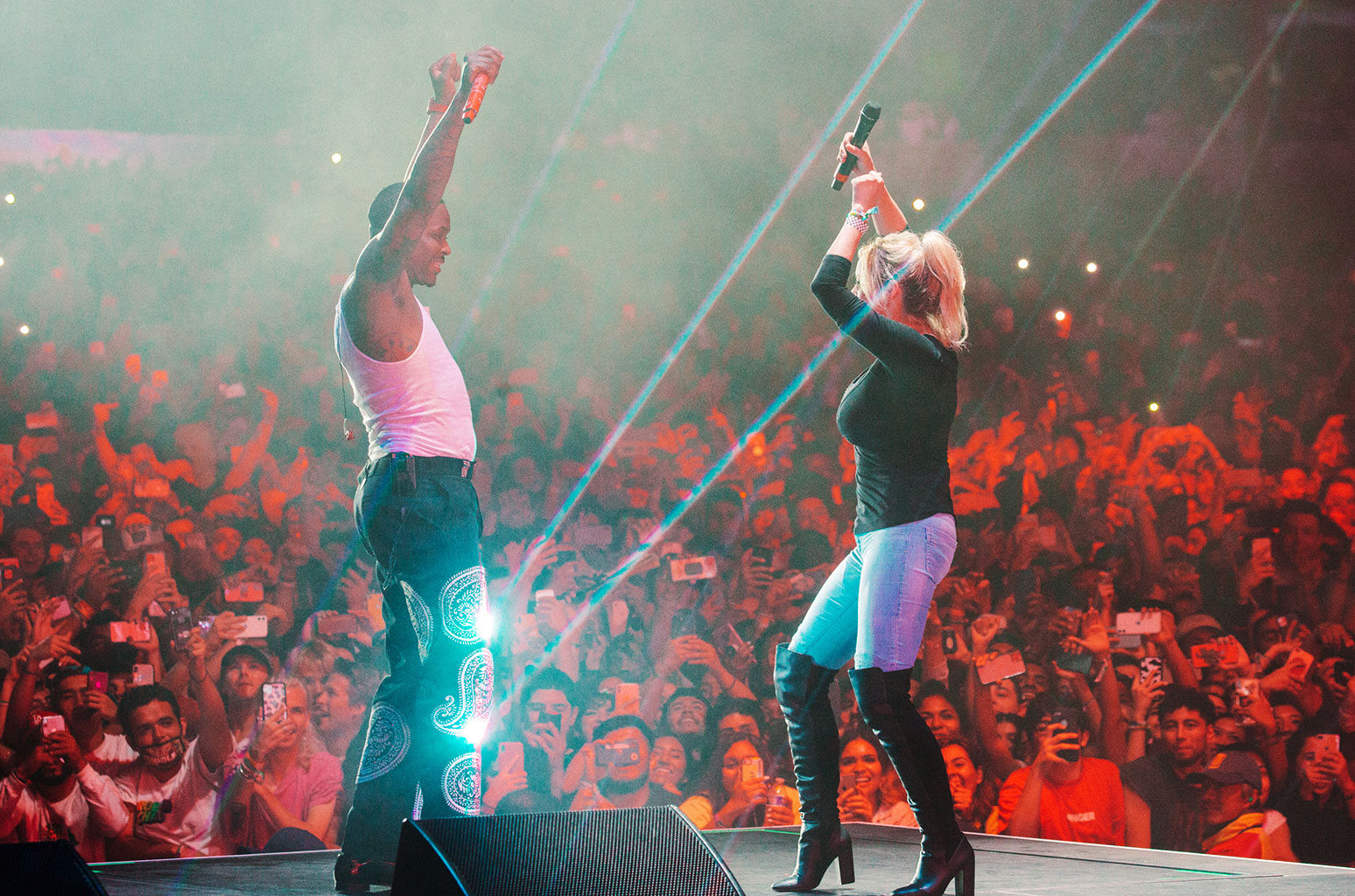 Soon, Tyler walked out and asked, “Could I bring a few friends out, would that be ok?” which was answered with a storm of affirmative screams. First to emerge from backstage was Lord Pretty Flacko himself, A$AP Rocky, showing up to get the crowd moving for two of his songs before walking offstage. Tyler then returned and asked “Can I bring out another friend?” and welcomed Lil Uzi Vert on stage, electrifying the audience with his infectious enthusiasm. Uzi finished after two songs, prompting Tyler again. “Can I …,” he started until he was cut off by the crowd’s noise. And then he stepped out — not Frank Ocean, but Drake, international superstar, initially being warmly welcomed by the fans. His setlist included some of his most popular bangers, but also some deep album cuts performed beautifully by the current king of pop. As he wrapped up his set, he asked if the crowd wanted more. But as they were still expecting Frank to close the show, many responded with boos and screams of no. The show ended there, with Drake saying goodbye to Camp Flog Gnaw. “It’s been love. I love y’all. I go by the name of Drake,” he said. “Thank y’all for having me.”

As everyone marched in unison back to their cars, most were left disappointed with the way the night ended. Some were mad that it wasn’t Frank, while others were mad at the way the crowd treated Drake.

“That’s Drake, the number one artist in the world! How y’all gonna show Juice WRLD love, but not Drake? Fuck Frank!” said one festival attendant.

The weekend had been a testament to youth and the possibilities that being a kid can offer. Even though the weekend ended on a sour note, many left having accomplished what they set out to do: enjoy themselves. They had finished off a weekend of arguably too many substances in one piece, coming out with a few more stories to tell. Camp Flog Gnaw made history once again, leaving Dodger Stadium upside down and covered in drug remnants. Tyler truly knows how to throw a party.