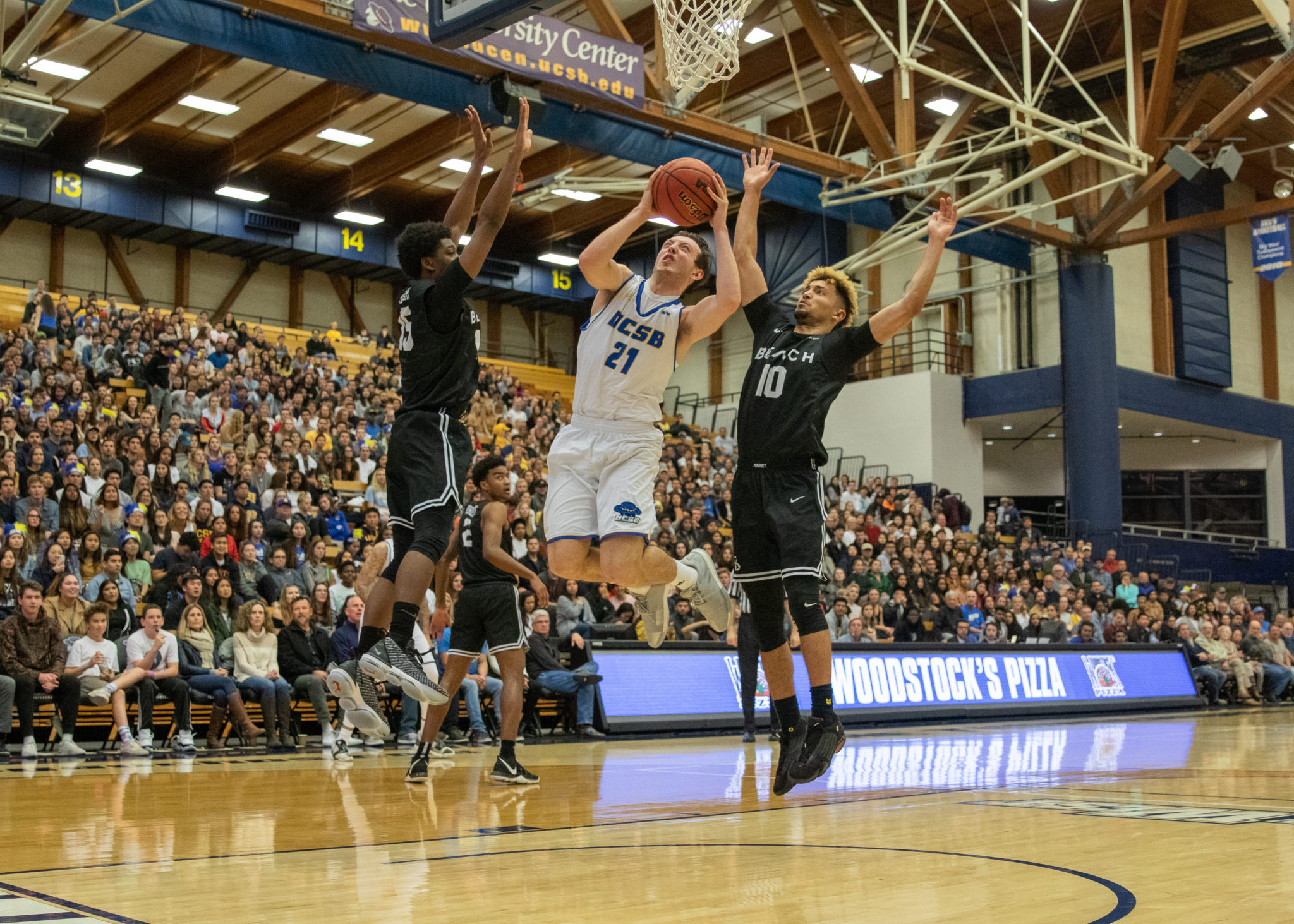 When Long Beach State took UC Los Angeles to the brink in their season opener on Wednesday, they provided a blueprint for how to topple the Bruins. On Sunday evening, the UC Santa Barbara men’s basketball team followed the blueprint a little too closely.

Just like the Beach before them, the Gauchos took a lead into halftime against UCLA only to watch the Bruins roar back to life in the second half. UCSB made several comeback attempts, but ultimately fell short and lost 77-61.

The loss dropped the Gauchos to 1-1 on the season, and pushed UCLA to 2-0 under new head coach Mick Cronin.

Both teams got off to a slow start on Sunday, combining for 8 total points in the first six minutes, but 9 points and 4 assists from senior guard Max Heidegger helped the Gauchos get their offense going. Sophomore forward Jay Nagle and graduate transfer forward Matt Freeman both chipped in 6 points on 2 threes as well, and helped push UCSB out to a lead.

The Gauchos were never able to widen their lead much, however. Nagle’s second three gave UCSB a 29-23 advantage with just under four minutes to go in the first, but UCLA hung tight and went into halftime down just 34-32.

UCSB’s inability to build a significant cushion in the first half doomed them in the second half. Just as Long Beach State learned a few nights earlier, it takes a lot of cushion to topple a team like UCLA.

The 2-point cushion, such that it was, lasted the Gauchos just under a minute of second half action. Two UCSB turnovers and two Prince Ali buckets reversed the situation and put UCLA up 36-34 with 19:14 left in the game.

The Gauchos never regained the lead. The Bruins built up an 11-point lead over the following five minutes, largely off the strength of their size and rebounding.

UCSB was staring down something of a size disparity from the get-go, but the team managed to keep pace with the Bruins’ big men on the glass in the first half. That changed completely in the second half.

In the final 20 minutes of action, UCLA grabbed 21 rebounds to UCSB’s 10. Included in UCLA’s 21 boards were ten offensive rebounds, many of which quickly became second-chance points. The Bruins dominated that category all game with 20 against just 5 for the Gauchos.

Many of those second-chance buckets came in the second half, and enabled the Bruins to take control of the game and coast to victory. Redshirt sophomore center Jalen Hill did the most damage with 22 points and 10 rebounds, 8 of which came on the offensive glass.

UCSB’s big men couldn’t contain Hill and his teammates, and couldn’t stay out of foul trouble, either. Sophomore forward Amadou Sow and junior forward Robinson Idehen both fouled out in the second half, and Freeman finished with 4 fouls.

The fouls aside, Freeman turned in a solid performance in his second game in a UCSB jersey. A transfer from Oklahoma, Freeman knocked down 3 three’s and finished with 12 points, second only to Heidegger.

Heidegger provided almost half of the Gauchos’ second half offense with 12 points, and finished with 21 on the evening. The senior dished out a team-high 6 assists against only 2 turnovers as well.

UCLA might have taken swift control of the game in the second half, but the Gauchos didn’t go down without a fight. They put up several fights, in fact, the last of which saw the lead cut to eight on a Heidegger layup with 4:44 to go.

Just as they had done to each comeback attempt before it, however, the Bruins stifled this last gasp with rebounding and post offense. Hill corralled an offensive rebound and put it back up to make the game 67-57, and followed that up with a dunk on the next possession. The lead never again dipped below double-digits.

Hill did the most damage of any Bruin, but he had plenty of help. Sophomore guard Jules Bernard was a dynamo off the bench with 20 points and 8 rebounds, while guards Ali and Chris Smith had 12 and 13 points, respectively.

UCSB’s job doesn’t get too much easier next week. The Gauchos host Rice on Saturday before traveling to Corvallis to take on Oregon State, another Pac-12 opponent, next Wednesday.

Size will likely be an issue again against the Beavers, but UCSB proved on Sunday they can hang with marquee competition. The trick next time is hanging with them for two whole halves of basketball.