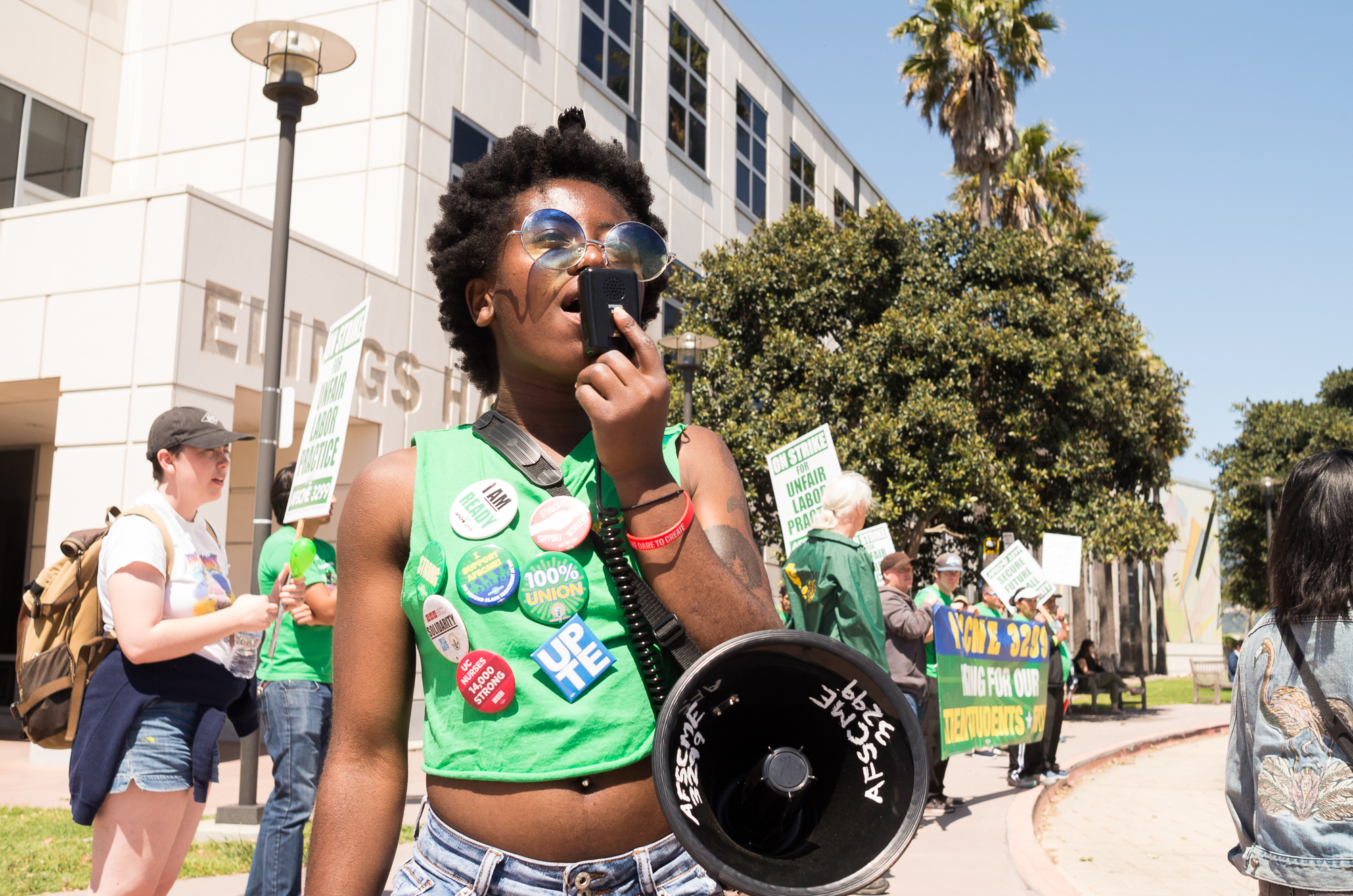 According to AFSCME (pictured at a previous strike), previously undisclosed documents reveal that the UC, in some instances, allegedly amended contracts in secret after establishing a “contractual relationship” with vendors. Sicheng Wang / Daily Nexus

The American Federation of State, County and Municipal Employees 3299 (AFSCME) filed the complaints to “challeng[e] another wave of unlawful contracting out by University officials,” according to a document provided by Leonard Carder LLC, a law firm representing AFSCME.

In addition to the complaints, the union will also go on a statewide unfair labor practice strike on Nov. 13, according to a press release from AFSCME. The California Public Employment Relations Board has already obtained “sufficient evidence” to call for a “formal complaint” against the UC, according to the press release.

According to AFSCME, previously undisclosed documents reveal that the UC, in some instances, allegedly amended contracts in secret after establishing a “contractual relationship” with vendors.

For example, “UC’s initial 2016 contract with Lyon’s Security at UC Office of the President’s UCPath Center in Riverside required the vendor to pay their contractors UC’s [$15 an hour] minimum wage. UC amended the contract in 2018 to exempt Lyon’s Security from this requirement,” according to the document.

In October 2017, Mercury News reported that a UC Los Angeles food service worker — who logged over 106 hours in two weeks — was paid under two names to avoid receiving overtime pay; the employee’s base pay was $10.50 an hour, nearly five dollars below the UC’s minimum wage.

Following a 2017 California State Auditor’s report that was critical of the UC’s “flawed” and “ignored” policies surrounding outsourcing and competitive bidding, the UC allegedly amended its protocols “to require all University locations to either allow existing contracts to expire after 10 years or submit them to renewed competitive bidding,” the document read.

“After 10 years, then, if UC wished to contract out work for more time, UC is supposed to put out a Request for Proposals (RFP), notify AFSCME and justify to the Union why it seeks to outsource the work for the additional period of time,” the document continued.

However, the complaint alleged that the university instead granted itself “exemptions” from its own amended policies and extended its existing contracts in secret. This allegedly occurred in secret “at least 28 times” from 2009-2019 at UCLA, when the university added an extra 17 “patient care technical titles” to its contract with AMN Healthcare, a healthcare management service.

AFSMCE also alleged that the UC has spent more money on outsourcing — which has increased by “as much as 52% since 2016” — and has poached union employees’ prospects for employment, opting to instead hire lower wage non-contract workers to do the same jobs, according to a separate press release from AFSCME.

“In August of 2019, UC notified state legislators that it now spends $523 million on these same services—a growth rate in outsourcing that is roughly three times larger than its direct employment growth for the same jobs,” the press release continued.

When contract renewals are on the table, AFSCME said it is the UC’s duty to first determine whether “[the contract] exists to save money solely on the basis of the contractor’s lower wages and benefits, and if so, to bring that work back in house.”

Instead of approving such contracts, AFSCME said the UC allegedly goes about filling those positions secretly, leaving contract employees in a “contingent” status, which keeps them at arm’s length from the benefits and wages of full-time employment.

This allegedly occurred at UC San Francisco, where 62 contracted employees working for Allied Barton, a security service, applied for “career positions” at UCSF, according to the document. Only 11 positions were filled despite many Allied Barton employees “applying to open positions two or more times,” the document read. AFSCME alleged this is a result of UCSF’s decision to keep workers retained to a contingent status.

In response to the recent complaints and strike announcement, Andrew Gordon, spokesperson for the UC Office of the President (UCOP), said in an email that the UC finds that “AFSCME leaders have shown little flexibility on their unreasonable wage demands,” even after announcing its sixth strike since negotiations began in spring 2017.

“AFSCME leader’s contracting claims and continual strike activity are attempts to gain leverage in negotiations. UC’s agreements with AFSCME protect employees from displacement due to contracting and no employee can be terminated as a result of a sub-contracting decision.

Contrary to UCOP’s stance, AFSCME finds that the UC’s treatment of its employees warrants a reaction that goes beyond the bargaining table — “the picket lines.”

“What is so troubling about UC’s continuing illegal conduct is that it’s becoming even more prevalent,” Kathryn Lybarger, AFSCME president, said. “These complaints detail UC’s continuing systematic and often secretive efforts to replace its own employees with lower wage contractors.”