It was a dark and stormy night — Oct. 31, to be exact. On 65 Seville, Carrie put on the finishing touches of her homemade Baz Luhrmann’s Juliet, à la Claire Danes. She turned to her roommate Belinda, who was dressed as a sexy Solo cup. “I have a good feeling about tonight,” she said, adjusting the strap of her bejeweled angel wings.

Over on the other side of I.V., the 68 block of Del Playa Drive, to be exact, Shane was preparing his liver for a night out on the town. “Bruh, fuck this noise ordinance. I’m just tryna keep it local, but these cops are making it impossible,” he shouted to his bro, Jake, as he adjusted his devil horns. “Bro, I know,” Jake hollered between shots of Fireball. “But we’re gonna get lit downtown tonight!”

It was fate that these two star-crossed lovers were to meet on Bill’s Bus this night, the spookiest night of the quarter. 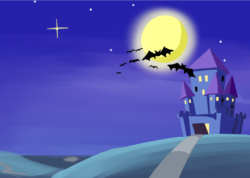 “I’m so glad that my last midterm was today,” Carrie exclaimed to her friends as they loaded onto the bus. “I’m finally free!”

As the bus pulled onto the freeway, Shane braced himself as they hit a bump but was unable to stop his drink from sloshing over onto the short chick in front of him, who was dressed as a red Solo cup. As he awkwardly leaned over the crowd to pat her costume dry, he was suddenly entranced by an angel.

Carrie heard a cry coming from Belinda. “Not my costume! I skipped all my classes today to make this,” she cried. As Carrie turned around to examine the damage to her roommate’s costume, she locked eyes with a handsome devil. She was instantly captivated; she’d always been a fan of bad boys.

“Wow,” the two said in unison.

“Hey!” Belinda shouted, “What about me?”

But their chemistry was too strong. As the bus pulled up to Joe’s Cafe, the two felt too connected to part ways.

“Where are you going?” Carrie asked Shane, as they each signaled their respective friends to go on without them.

“I’ll go wherever you go, angel,” he said, as the two walked hand in hand to Joe’s.

“Hey, an angel and a devil,” the bouncer pointed out. “Nice couple’s costume — you should enter the contest and win a free table at Sandbar.”

The two were inseparable all night, grinding, drinking and making out for all of downtown to see. It was magical. But at the end of the night, Carrie grew quiet.

“I just can’t believe I met you … it all seems too good to be true. I don’t want this night to end,” she sighed.

“Well, it doesn’t have to,” he said slyly. Like her very own Prince Charming, Shane whisked Carrie away into their very own UberBlack.

Carrie awoke the next morning alone in her bed, groggy from her night on the town. Had it all been a dream? She patted the other side of her bed, still radiating body heat, red paint staining the pillowcase beside her.

She frantically checked her phone for any trace of the devil. As she watched Belinda’s Instagram story, she recognized herself grinding on the handsome stranger from the night before. No, this was real. Carrie scrolled through her Snapchat and noticed a name she had never seen before. Shane, with a purple devil emoji.

“Hey, last night was fun,” she wrote over a photo of herself that she retook 12 times. “Would love to see you again.” Send.

Carrie anxiously awaited a response all day, refreshing her Snapchat throughout class.

And in that moment a heartbroken Carrie knew — her mystery man was no devil. He was a ghost.