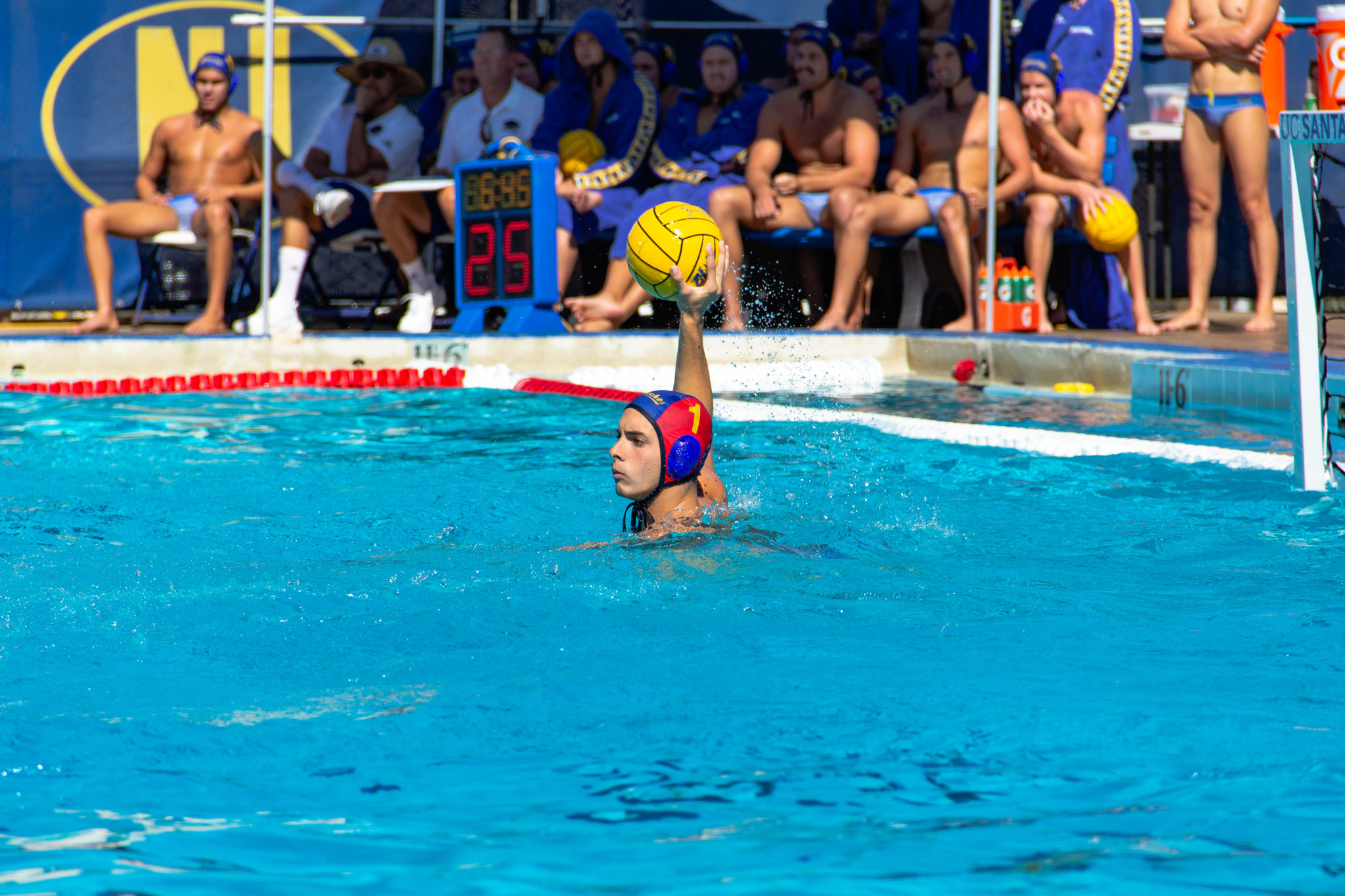 The UCSB men’s water polo team earned its first two wins of October this weekend, snapping a five-game losing streak with wins over No. 7 Long Beach State on Saturday and No. 8 Cal on Sunday. The wins pushed the No. 4 Gauchos’ record to 17-5 on the season and 1-1 in Golden Coast Conference play.

Just like all but one of the games UCSB lost during its slump, both games this weekend came down to the final minutes. The Gauchos hung on to beat the Beach 11-10 despite a last-minute LBSU goal and poured in four goals in overtime to beat the Golden Bears 13-10.

Sophomore driver Nathan Puentes was the star of the weekend with nine goals across the two games. Puentes notched a double hat trick against Cal in the most individually dominant performance by any Gaucho this season and rattled the cage three different times in overtime to create the margin of victory all on his own.

The sophomore posted his first hat trick entirely in the first half but was forced to leave the game for a spell in the second half due to an injury. That Puentes was able to overcome that injury and return to the water to post a second hat trick is a testament to his fortitude.

Of course, with nine goals over the weekend, Sunday’s game wasn’t the only one Puentes left his mark on. The sophomore driver notched his first three goals of the weekend on Saturday against Long Beach State, including a penalty-shot goal with four minutes left in the fourth quarter that put the Gauchos ahead for good.

The first half against Long Beach State was the definition of back-and-forth, with neither team able to gain more than a one-goal lead. The Beach closed the half up 6-5 thanks to two goals in the final two minutes, both assisted by junior attacker Nemanja Bakic.

The second half, on the other hand, began with three straight Gaucho goals. Brosnan scored two of those goals, while junior defender Mason McQuet scored the third with two minutes left in the third quarter.

A goal from Gvozdanovic opened up the fourth quarter and pushed the UCSB lead to 9-7, but the Beach quickly battled back with two goals to tie the game up at nine apiece with just over four minutes to go.

That, of course, set the stage for Puentes’ go-ahead penalty shot, and senior driver Tommy Fellner added one more goal for insurance in the final minute of the game.

One final LBSU goal with 28 seconds left in the game cut the lead to one, but the Gauchos held on for their first win in a one-goal game this season. Four of UCSB’s losses during their five-game losing streak were by one goal, making their slim victory against LBSU that much sweeter.

As satisfying as Saturday’s win was for the Gauchos, they didn’t have much time to rest on their laurels. Instead, the team had to drive right back up Highway 101 and get ready to host Cal the next day.

Sunday’s game was a rematch and a chance for the Golden Bears to get revenge for UCSB’s 8-5 victory on Sept. 8. With two minutes left in the fourth quarter, and Cal clinging to a 9-8 lead, it appeared for a moment that the visitors were going to get that revenge, despite Puentes’ hat trick.

Enter sophomore attacker Leo Yuno, who netted an even-strength goal just as the clock ticked under two minutes and tied the game up at nine. Both teams had their chances to break the deadlock but neither was able to convert.

The Nathan Puentes one-man band came roaring back to life in overtime, first with a penalty shot followed by two even-strength goals. Cal could muster only one goal in response, sealing the dramatic Gaucho victory.

Sophomore goalie Danny Roland made life difficult for the Berkeley attackers all day long with 13 saves and three steals. Gvozdanovic helped him out with three steals of his own and also dished out three assists on the offensive end.

The Gauchos must now prepare to take on UC Irvine on Saturday at Campus Pool. The 12 p.m. game is UCSB’s last home game of the season, so a Senior Day ceremony will take place immediately prior to the game.