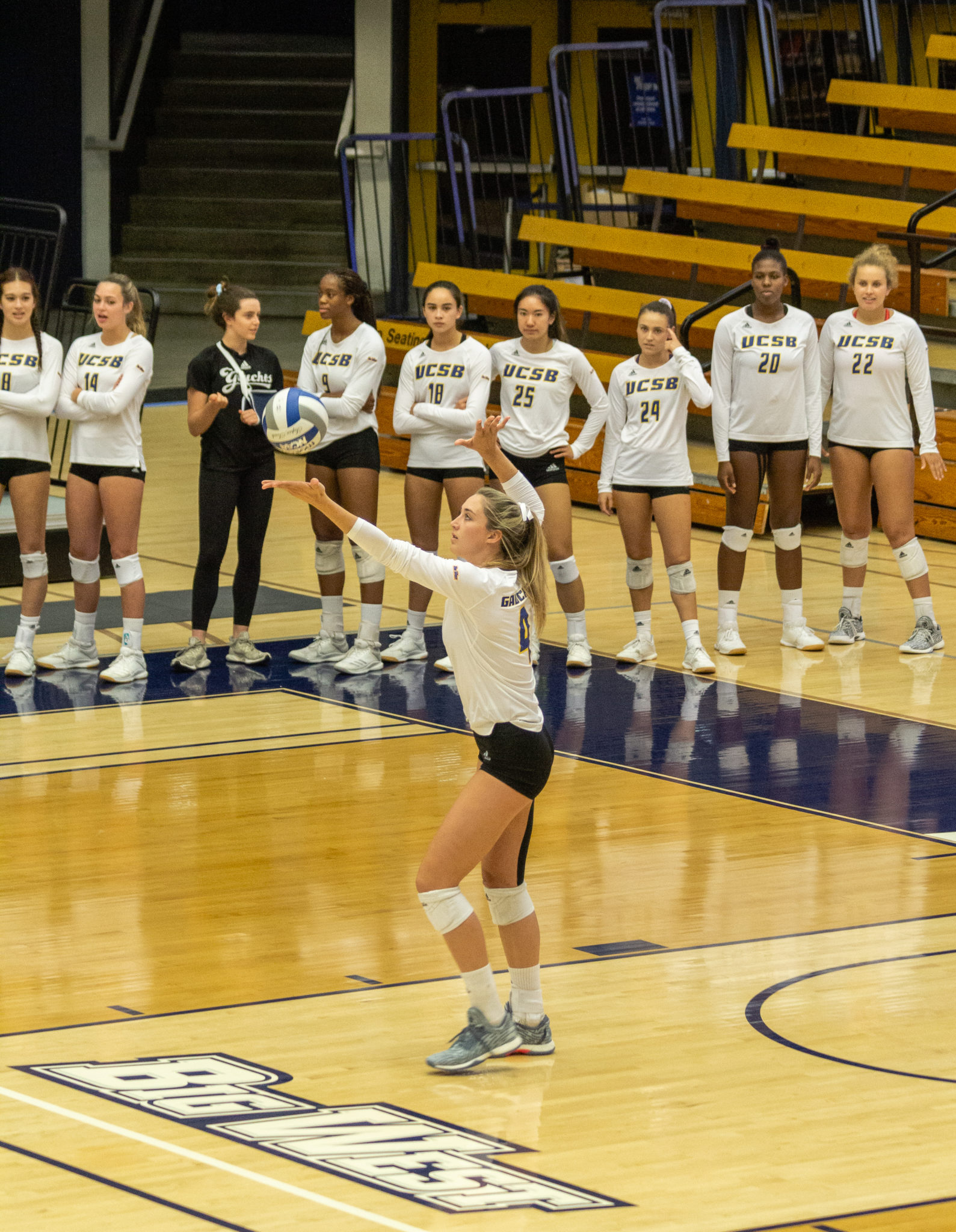 The UC Santa Barbara women’s volleyball team swept both UC Davis and UC Riverside this weekend on the back of Lindsey Ruddins’ 38 kills.

Ruddins, who missed the match against Cal Poly just last week, triumphantly returned with a kill percentage of 0.531 over the two games all the while committing just three errors.

More impressive than that, however, is that Ruddins had the most efficient game of her Gaucho career, posting an incredulous .548 hitting percentage against Davis on Thursday. The Gauchos led both teams in hitting percentage and posted more than double the amount of blocks.

The first set was all UCSB, who showcased a stout defense led by Deni Wilson and Kjia Rivers, each with five blocks.

The second set provided much more drama as the Aggies were able to tie it up after a 10-3 start for the Gauchos.

A pivotal block by the tandem of Tallulah Froley and Rowan Ennis won the set for the Gauchos just moments after Ruddins broke a 23-23 tie.

Aggie Lauren Matias had a solid night with 14 kills, one service ace and six digs, but her pedestrian .294 hitting percentage just didn’t have the support needed for her team to get the win. Jane Seslar should be noted as well after having posted 27 assists and 12 digs.

Reigning Big West Player of the Week Froley joined the attack and added another 10 kills in the must-win victory for the Gauchos.

UC Riverside, if it were to be, perhaps posed the greatest threat to the Gauchos. History has told us that underestimating your opponent is a surefire way to get your butt kicked. Fortunately for the Gauchos, they just kept rolling.

Ruddins had 20 kills, Zoe Fleck had 11 digs and Olivia Lovenberg had 19 assists as the Gauchos were consistently a step ahead of the Highlanders.

Despite the one-sided result, it’d be disrespectful not to highlight Renata Bath’s performance for the Highlanders. In three sets played, she managed two service aces, an assist and 12 digs to cap a fine individual night. To put it in perspective, UCSB’s Torre Glasker is the only other player to post two service aces while no one was able to match Bath’s 12 digs.

Nevertheless, it takes more than an individual performance to win it all, something the Gauchos know all too well from last season’s fourth-place finish. This season’s been different though, and a long lineup of athletes overflowing with composure seems to be rolled out night in and night out. Nothing was different in these games, but what’s important is that the loss to Hawai’i just a week ago was nothing more than an off night.

UCSB will host Long Beach State on Tuesday before hitting the road for another two games against Hawai’i and UCSB’s archrivals, Cal Poly.

Tuesday’s match kicks off at 7:00 p.m. right here at the Thunderdome.