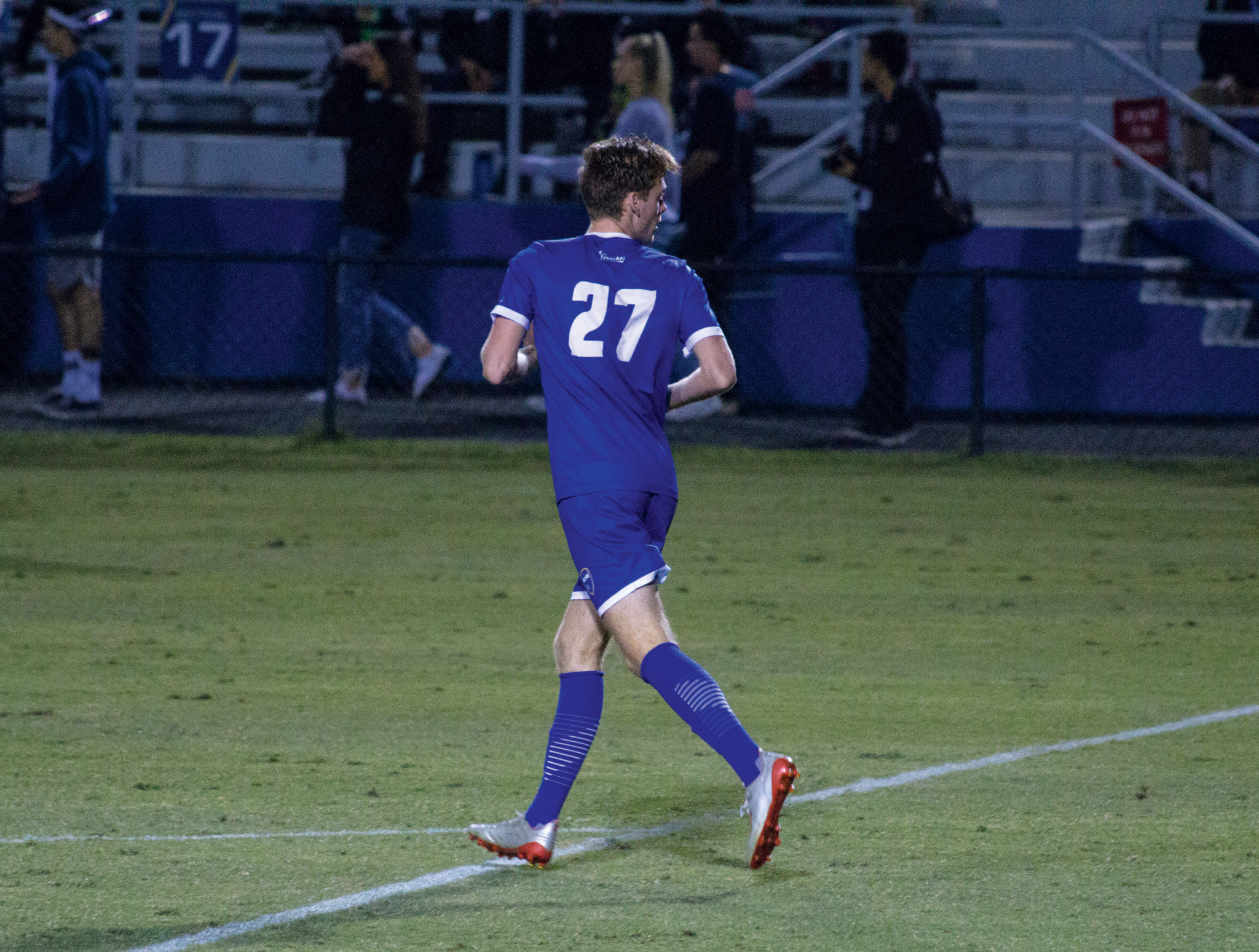 It has been tough sledding for the No. 17 UCSB men’s soccer team since their loss last weekend to UC Irvine, which ultimately ended the Blue and Gold’s unbeaten streak in 11 straight matches, but their most recent tie away at UC Davis was hard-fought and showed plenty of positives.

Now at a 10-3-3 overall record on the season and 3-1-1 in the Big West, the Gauchos will look forward to closing out the regular season on a strong note as only two matches are left in conference play; away at CSUN this Saturday, then away again next Saturday for the second installment of the Blue-Green rivalry.

As it stands, UCSB, UC Davis and UC Irvine all share the top spot in the Big West standings with 10 points apiece — with the latter team currently holding the tiebreaker in conference record.
Wednesday’s proceedings began with UCSB visiting UC Davis for a rare day game at Aggie Soccer Field. Whether it was motivated by protecting their home field in order to earn the top spot in the Big West or determination to defeat a top-20 program in the nation in UCSB, the Aggies got off to a fiery start as they peppered the Gauchos’ goal with plenty of shots early on in the match. So much so that junior defender Hunter Ashworth already saw yellow by the seventh minute of play and was the first of four Gauchos that would go on to be booked by the referee.

It wasn’t until minute 13 that the Gauchos found their first chance of the game off a corner kick by junior forward Ameyawu Muntari. Unfortunately, senior midfielder Thibault Candia, who has been brilliant for the Gauchos all season, picked up a knock and freshman midfielder Finn Ballard McBride came on for the injured Gaucho. Following this sequence, UCSB slowly began to find their rhythm, but UC Davis kept their shots flooding in as the first half went on.

Then, by the 38th minute, a corner kick for the Aggies set up the match’s first score as a crowded penalty area triggered a Gaucho own goal.

Perhaps the Aggies’ celebrations of going one up had gone to their heads, as it literally took a matter of seconds for UCSB to respond. And respond they did, as the Gauchos seemingly went straight for the host’s goal from kickoff.

The equalizing goal was set up off a shot from senior forward Will Baynham. Baynham’s initial shot was saved by Aggie goalkeeper Wallis Lapsley, but the ball rebounded off his gloves and took a favorable roll for the visitors as it met Ballard McBride’s boot before meeting the back of the net.

Already in the midst of a sensational rookie season, Ballard McBride continues to light up the scoresheet. With the day’s deciding goal, Ballard McBride now has his ninth goal of the season — leading all Gauchos in goals scored. He also has a pair of assists to his name, but the Australian’s ability to produce off the bench has been nothing short of phenomenal this year.

Following the back-to-back goals, the remainder of the match proved to be a cagey affair with a total of 38 fouls across the two teams. Nevertheless, even with UC Davis outshooting UCSB 19 to 9, the Gauchos managed to hold on through two periods of extra time and secure a point on the road.

The performance from UCSB’s sophomore goalkeeper, Ben Roach, was also worth noting as his nine total saves kept his side in it through all 110 minutes of play.

The men’s soccer postseason starts in two weeks for the Gauchos, but the team still has a pair of road games ahead of them before they can think about playoff glory. For now, all eyes remain on the Big West and the conference berths will depend upon how these final fixtures play out.

UCSB travels south to CSUN this Saturday, Oct. 26, for their penultimate regular season conference matchup — kickoff is set for 7 p.m.