The Daily Nexus
News
Campus By the Sea Exhibit Highlights 75 Years of UCSB
October 24, 2019 at 12:05 am by Katherine Swartz and Sofia Lyon 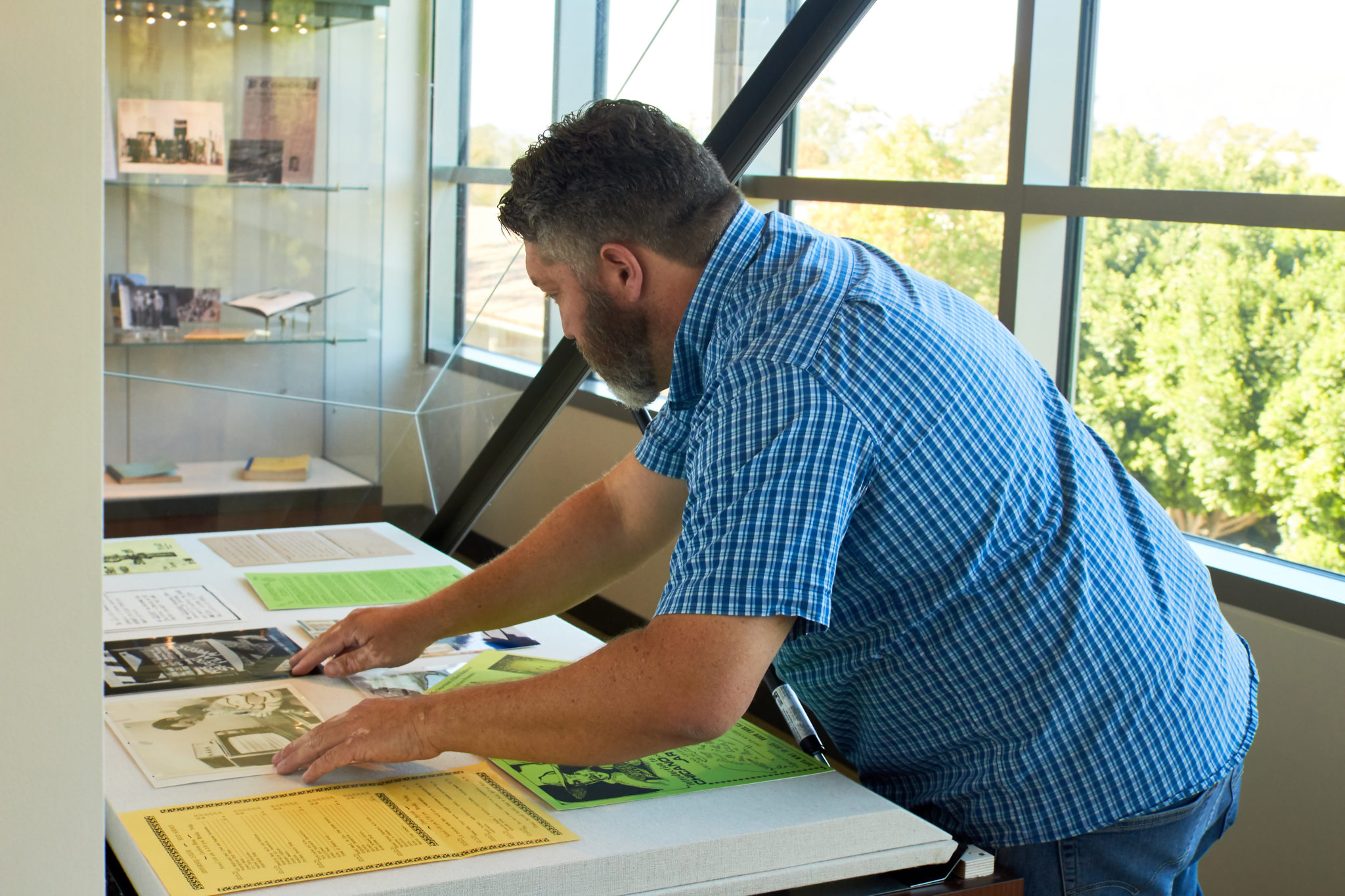 The exhibit uses photographs, articles and other items from the university archives. Katherine Swartz/Daily Nexus

Located on the third floor of the Davidson Library, the exhibit uses photographs, articles and other items from the university archives to show the changes in UCSB’s academic reputation in the 75 years since UCSB joined the UC system.

Matt Stahl, who became the first dedicated university archivist of UCSB in 2017, was in charge of designing and curating the exhibit.

“We wanted to pay homage to some of the institutions before, but there have been a lot of exhibits already in the library about the Anna Blake school and other preceding institutions. So we didn’t want to get bogged down in the pre-history of the institution,” Stahl said.

The exhibit is sorted by decade from the 1940s onwards. Some of the earlier decades include digitized copies of old photographs and poster copies of the El Gaucho student newspaper, which was an early iteration of what is now known as the Daily Nexus.

“Some of the other exhibits that we’ve done, they draw from … maybe one or two collections. For this one, I mean we have 130 different collections from just the university archives … Some of them are huge, some of them are just like one or two boxes, but I mean there was a lot more material to sift through,” Stahl said.

One key element to UCSB’s transformation was the dissolution of the home economics department and the creation of the Black studies, Chicana and Chicano studies and environmental studies departments in the late 1960s. The shift in curriculum during the period was the academic response to the broader cultural change in UCSB’s student body during the time period, according to Stahl.

Stahl notes through the exhibit a “crisis” of declining enrollment throughout the 1970s following the Bank of America burning and Isla Vista riots of 1970.

“Even if our reputation [was] suffering, I think you can look at it best as growing pains, that the university was really trying to find its new identity and struggle with what kind of institution it’s supposed to be,” Stahl said.

While the first half of the exhibit — up to the 1970s — uses photographs and documents from that time, Stahl found there were less archival documents from the 1980s to now. Because there was no university archivist until Stahl was hired in 2017, departments and organizations were responsible for archiving their own work — which often was not properly preserved, if archived at all.

“We didn’t have enough material necessarily to have a case for each decade,” Stahl said. “So we from this point changed it to research focus, like what have we done well in the field of research.”

The three displays for the 1980s to the present include a dedication to achievements in science, technology, engineering and mathematics (S.T.E.M.), one for research in the social sciences and humanities and a third displaying photos of UCSB’s six Nobel Laureates, along with a bronze duplicate Nobel Prize provided by former physics professor Walter Kohn.

While the modern exhibit section focuses on research, Stahl hopes that the exhibit will help UCSB student and faculty leaders understand the importance of archiving their work for future years.

“Hopefully this will kind of generate awareness there that if you’re a student organization on campus and you have historical records, we are willing and able to preserve them for you here.”

Stahl and his team of curators — Special Collections Librarians David Gartrell and Yolanda Blue and Processing Archivist Leland Riddlesperger — strived through Campus by the Sea to not only focus on UCSB’s previous evolution into a research institution but also what lies ahead in the university’s future.

The curators incorporated this element through photographs of current students on a wall in the exhibit. Students answered questions about how their university experience has shaped them and their hopes for the future of UCSB.

Yolanda Blue noticed that as UCSB’s population continued to grow since it first became a UC, so has its reputation.

“The campus started as a small liberal arts campus, very small in concept and focus. And now, 75 years later, we’re known worldwide as a world-class research university. The growth – how the campus has transitioned over the years in spite of all the different events that have taken place,” Blue said.

“We’ve acquired so many different departments and Nobel Prize winners … it’s inspirational, as you can tell from the comments made by the students that we interviewed.”

The opening reception for Campus by the Sea will be held on Thursday from 5 p.m. to 7 p.m. in the Special Research Collections area of the library on the third floor mountain side. An open house will also be held on Nov. 1 from 2 p.m. to 4 p.m.

The exhibit will be open on the third floor in the Special Research Collections until July and can also be viewed digitally through the Campus by the Sea website.