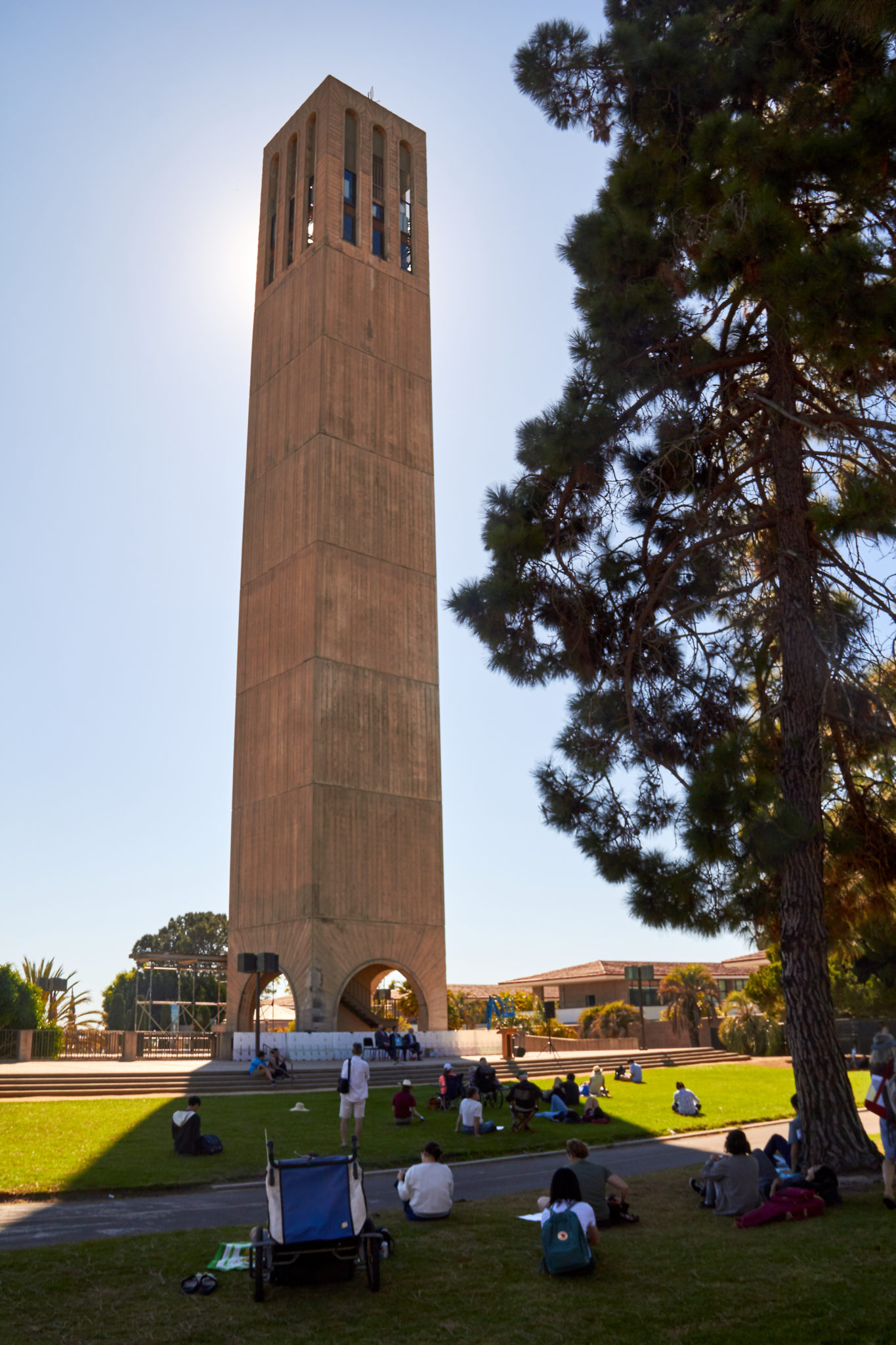 And it was that container and those bells that Arai commemorated on Sunday, when he played a series of compositions on the carillon at the top of Storke Tower for the 50th anniversary of its dedication.

Students, faculty and curious passersby made themselves comfortable on the grass around the building as new and familiar melodies reverberated throughout and beyond the campus. Speakers at the recital included Margo Halsted, former UCSB university carillonist; John Majewski, UCSB dean of humanities and fine arts and Nick Masuda, director of news at the Santa Barbara News-Press.

The structure and the instrument resting within the tower were both gifts from the late Thomas M. Storke, a Pulitzer Prize-winning journalist and owner of the Santa Barbara News-Press for 32 years. During the dedication ceremony on Sept. 28, 1969, he stated:

“It is my hope that the publications coming from this building will be the finest examples of journalism developed on any campus in America — perhaps in the world.”

In the five decades since, the KCSB-FM radio station, La Cumbre yearbook and the Daily Nexus have made their homes at the base of the tower.

Honoring this amount of history was no small task. According to Arai, almost a year was spent preparing for the semicentennial: “The thing that took the longest was to work with the two composers we commissioned to write new pieces for the event. I would say the resulting two pieces are one of the major successes.”

“Golden Sounds,” by UCSB Professor Emeritus Emma Lou Diemer, was one of those pieces.

“I sat at the piano and held down the sustaining pedal to simulate the prolonged sounds of the carillon,” she wrote in an email, “and proceeded to write a piece that incorporated three different melodic elements and other musical ideas that are effective on the carillon.”

The second piece was “Fantasy on FIAT LUX” by world-renowned composer Aaron David Miller, which featured variations on the university motto “Fiat Lux” by the late Carl Zytowski, who was a UCSB professor of Music music for 44 years.

“Each letter of the motto spells out a musical theme which became the compositional material for the fantasy,” he explained.

The instrument that made all of these performances possible was the carillon atop Storke Tower, which contains 61 bells and is one of only six such installations in California. It is played with fists and feet that strike a set of wooden keys each corresponding to a specific bell: the heavier the strike, the louder the sound.

“The largest, lowest bells weigh up to 2.5 tons, while the smallest, highest ones can weigh as little as 13 pounds, so you need to be careful with the balance and not let the low bells totally bury the high bells,” Arai said.

In principle, this is not too different from how someone would play a piano or an organ, but the similarities end there.

“Sometimes there’s a bit of trial and error, where something I arrange just ends up being impossible to play or doesn’t sound good on the bells and I need to rework it.”

Despite these challenges, Arai, Diemer and Miller all agreed that the experience of playing a carillon is worth the learning curve, especially given the sweeping view of campus and the Pacific Ocean from atop Storke Tower.

“It is good to see and hear beyond and within one’s self,” Diemer wrote, and “it’s fun and exciting to create sounds with those 61 bells.” Miller invoked the concept of fun as well, writing that “I don’t know of another instrument you work up a sweat while playing.”

“You’re by yourself, high up in the tower when you play, far away from any listeners,” and “at least for me, this can actually make performing somewhat relaxing, unlike if you were performing on a stage where you can see your audience staring at you,” Arai added.

But, more than the performance itself, and true to Storke Tower’s tradition of learning and community expression, passing on the knowledge of the carillon is the best perk that comes with playing it.

“It’s a bit more than just ringing the bells,” Arai said. Every quarter, he trains three students on how to play the carillon. “I think this is the most rewarding part, getting to work with enthusiastic, talented students and teaching them this very unique art.”

Diemer agreed. “It all comes together sometimes: people, music, memories, creating, learning, never giving up, using one’s talents and perfecting them as much as possible, cherishing the marvelous gift of life, being thankful for all of that. But learning is probably the most important. Isla Vista is full of people who are doing just that.”

While the event may be over, the celebration and education continue. The next carillon recitals will be held on Nov. 17 at 11 a.m. and Nov. 24 at 10 a.m. in front of Storke Tower.