Last Friday, UC Santa Barbara students filled Corwin Pavilion, looking to engage in conversation with local politicians and university administrators on a topic that is central to many issues in the Isla Vista and UCSB community: basic needs of college students. 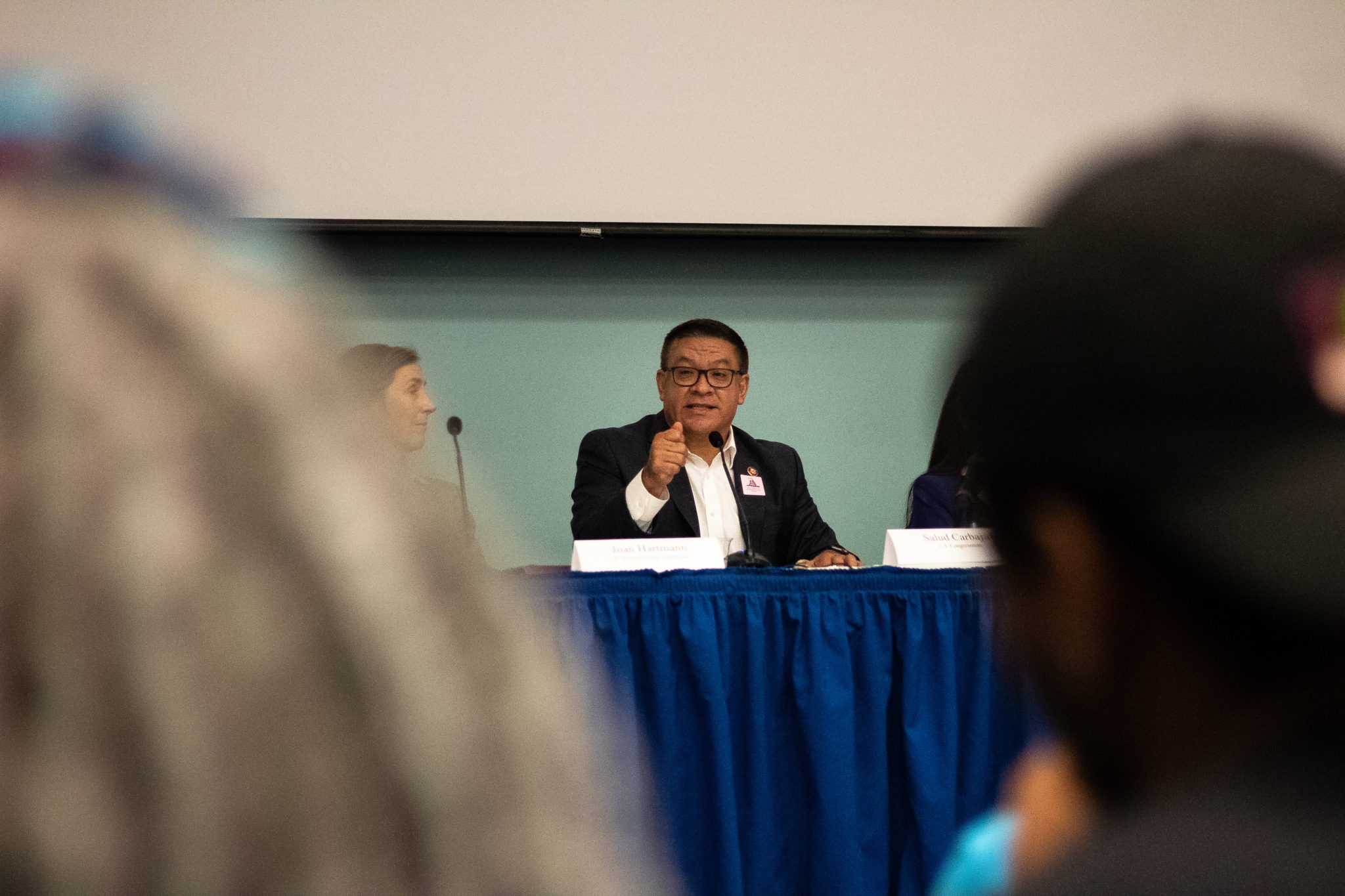 The town hall kicked off with brief introductions from each panelist with a description of the work they do. Max Abrams / Daily Nexus

The town hall was hosted by the Office of the External Vice President for Local Affairs (EVPLA), which is led by executive Christian Ornelas; alongside a panel featuring a number of prominent local officials, several campus organizations tabled to advertise the local resources available for students.

Isla Vista Community Services District (I.V. CSD) General Manager Jonathan Abboud and Board Director Jay Freeman were in the audience, but there was no representation from I.V.’s local government on stage.

The town hall kicked off with brief introductions from each panelist and a description of the work they do at their respective levels to help alleviate the insecurities that are often associated with basic needs.

From a political standpoint, Hartmann, Carbajal and Limón all stressed the importance of food assistance programs such as the federal Supplemental Nutrition Assistance Program (SNAP) and its California branch, CalFresh, which aim to shed weight from the insecurities of food affordability.

“Once you have qualified for [SNAP and CalFresh], the benefits [can be] used at a grocery store, the food co-op, the farmer’s market and the food pantry,” Hartmann added.

On the university side, Klawunn and Miller highlighted various programs and resources UCSB offers to students in need. Voucher programs, which support housing and meals, for example, can be used by students during times of crisis to help get them through their next meal or next month’s rent, according to Miller, who chairs the Food Security & Basic Needs Task Force at UCSB.

“What we’re trying to do is get as much direct aid to students as we can around food and around housing,” Klawunn added.

After the panelists’ introductions, students lined up behind the microphone to speak directly to the panel.

The first question asked to the panel was about the responsibility of the government to support basic needs and its efforts to carry those responsibilities out.

“Every five years, the government passes what is called the Farm Bill. And a good, significant funding of the farm bill is the SNAP program … it’s absolutely imperative that we look out for those who are most vulnerable amongst us and that we work together to provide a safety net,” Carbajal said.

The conversation then turned to housing when an audience member asked about affordable housing for campus workers.

Klawunn responded by talking about the proposed construction of additional housing on Ocean Road, where units would be offered for rent at more affordable prices, despite the “staggering” cost of living in I.V.

Limón, a member of the Housing and Community Development committee at the State Assembly who said she has voted in favor of “167 different bills to advance housing,” believes there is no one solution to remediating the issue.

Housing for “workers, for students, for staff, for anyone — it is a greater conversation and the state has really tried to make some investments,” she said.

As questions came in, one student asked the panel how Black students — one of the most underrepresented demographics at UCSB — would be supported through basic needs initiatives and remain “secure” in interactions with university law enforcement.

Hartmann responded with an acknowledgement that “people of color have it much worse” in the context of basic needs. She moved on to highlight local law enforcement’s transparent approaches through new initiatives such as the Isla Vista Foot Patrol Restorative Justice Program and the Party Registration Program.

Klawunn added that the UC Police Department’s new chief of police, James Brock, is taking a different approach to law enforcement by consulting students to “hear their voices” and better embed the police department in the community.

In a question directed to Miller, one student asked what the university can do better to spread awareness for resources offered on campus.

Miller acknowledged that spreading awareness for campus resources is the university’s “number one problem” in the context of basic needs. He noted that many initiatives, such as the Housing Voucher program, have been difficult to advertise to students because the programs were recently created.

To combat this, he noted that the university works with student interns to spread awareness to the rest of the student body on a grassroots level.

As the town hall drew to a close, one final question regarding the role of citizenship in eligibility for resources was brought to the panel.

Limón cited Assembly Bill 540, an 18-year-old piece of legislation that “allowed high school students who graduated in California to enroll [in college in California] with in-state tuition.”

In a different AB 540, signed by Governor Gavin Newsom this October, undocumented students will now have the opportunity to be eligible for certain grants and programs beginning next academic year, according to Limón.

Additionally, through UCSB’s incoming “meal plan scholarship,” Miller said the university is trying to establish “parallel programs” to CalFresh and SNAP by offering a campus alternative for undocumented students.

“We want to make sure undocumented students are on a level playing field,” he added.

When Carbajal took his turn to respond, he said that documentation and citizenship should not come before helping others.

“We don’t want to live in a country where we look at each other and not think of our humanity,” he said, drawing the town hall to a close.

There was no tangible change that came directly from the town hall in regard to helping students with their basic needs, although politicians and university administrators were presented with a clearer picture of what problems are affecting students the most.

Ornelas isn’t entirely sure what his office plans to do following the town hall but is actively “thinking of ways to move forward.” He intends to hand over his office’s work on basic needs to the A.S. Lobby Corps co-chairs who “will be able to give a lot more time and focus to a basic needs campaign.”

A version of this article appeared on page 6 of the Oct. 17, 2019 print edition of the Daily Nexus.