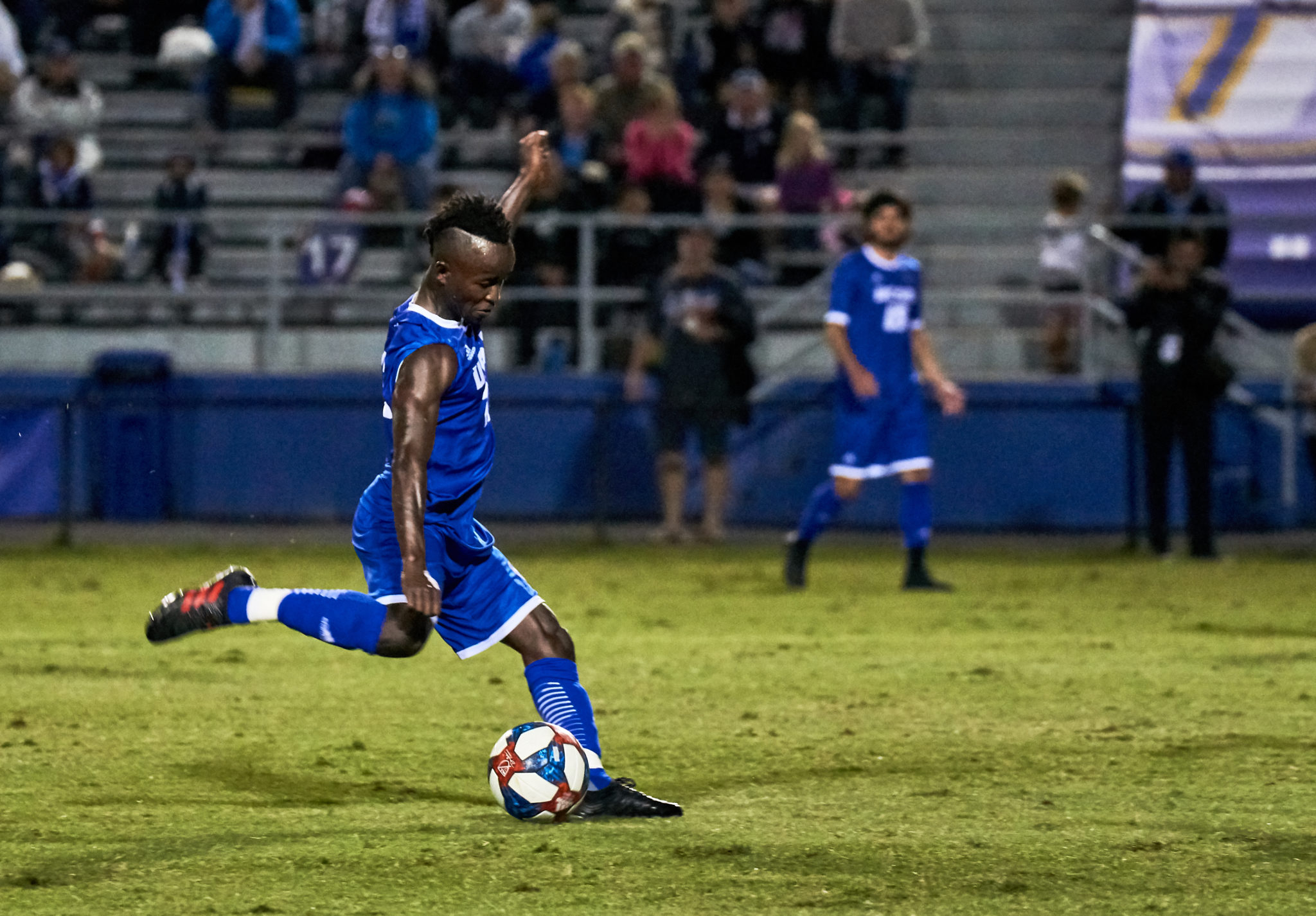 The No. 12 UCSB men’s soccer team steamrolled over Cal State Fullerton on Saturday night, handing the Titans their first home loss of the season with a 5-0 blowout.

Although UCSB has beaten squads like Seattle U and tied teams like No. 7 Stanford, this win might be the most impressive result so far. Both the Gauchos and the Titans were vying for a place in the national rankings coming into this matchup, with UCSB debuting on the Top Drawer Soccer rankings at No. 19 while Fullerton clinged to a No. 22 spot on that list and a No. 24 spot in the United Soccer Coaches poll.

What looked to be a colossal matchup between two of the top teams in the conference turned into a bloodbath pretty quickly.

The Gauchos dominated from the opening kick, passing circles around the Titan defense. They strung together a quick combination in the midfield just eight minutes in that culminated with a Noah Billingsley cross to forward Rodney Michael on the right side of the box. Michael sent in a low driven pass to Will Baynham who used his 6’3” frame to hold off a defender and place the ball in the lower left corner for a goal.

Just four minutes later, Billingsley stole the ball deep in Titan territory and set a streaking Thibault Candia up with a through ball in the box. Candia stepped up and rocketed the ball past the CSUF goalkeeper to double the Gaucho lead at the 12 minute mark.

This was one of the most complete halves that UCSB has put together this season, and a large part of the team’s heightened level of play can be attributed to the return of senior defender Billingsley. In the first 30 minutes of the match he had multiple key stops on the defensive end, and he got his second assist of the game in the 28th minute when Michael corralled his pass in the box and ricocheted a shot into the back of the net.

Both Billingsley and junior defender Hunter Ashworth are now back after qualifying for the Tokyo Olympics with the New Zealand U-23 team, and have filled the extremely important gap in the defense left by Faouzi Taieb’s devastating knee injury in the game against Stanford.

They’ve been at the helm of this Gaucho defense that now has a Big West leading six shutouts under its belt, and only gave up two shots on goal in the first half.

The halftime break cooled UCSB off, and the Titans came out looking to gain some momentum and cut into the 3-0 deficit. Junior defender Clayton Torr put an early shot on goal that was saved by UCSB goalie Ben Roach in the 46th minute, but that ended up being the first of only two shots on goal for the rest of the period for CSUF.

UCSB started to gain momentum as the half wore on, and in the 59th minute Baynham stole an attempted clearance in the Fullerton third of the field and sent in a pass to the box that took a slight touch from Billingsley before falling at the feet of forward Finn Ballard McBride.

Ballard McBride took a touch and calmly curled the ball around the goalkeeper for his sixth goal in what has been an incredible freshman campaign. The Australian already has two Big West Freshman of the Week awards to go along with one Big West Offensive Player of the Week award, and is fourth in the conference in goals scored. He’s a leading candidate for Freshman of the Year so far and he put the Gauchos up 4-0 around 15 minutes into the second half.

The Gauchos notched their fifth and final goal in the 66th minute when Ashworth headed home a Candia corner kick, putting an end to an incredible scoring onslaught.

Looking ahead, UCSB should be moving into the official NCAA Top 25, which is based off of the United Soccer Coaches Poll. If the Gauchos continue to mow through the conference with only one or two more losses they are in prime position to qualify for the NCAA Tournament outright, a feat the team hasn’t achieved since 2015.

This squad has hit its stride at the perfect time. If they can stay perfect in this extremely talented Big West Conference there’s no telling what the ceiling is for the Gauchos.