The Daily Nexus
Sports
Leading the Charge: Women of the UCSB Surf Team Turn the Tides Against Sexism
October 10, 2019 at 5:00 am by Hannah Jackson 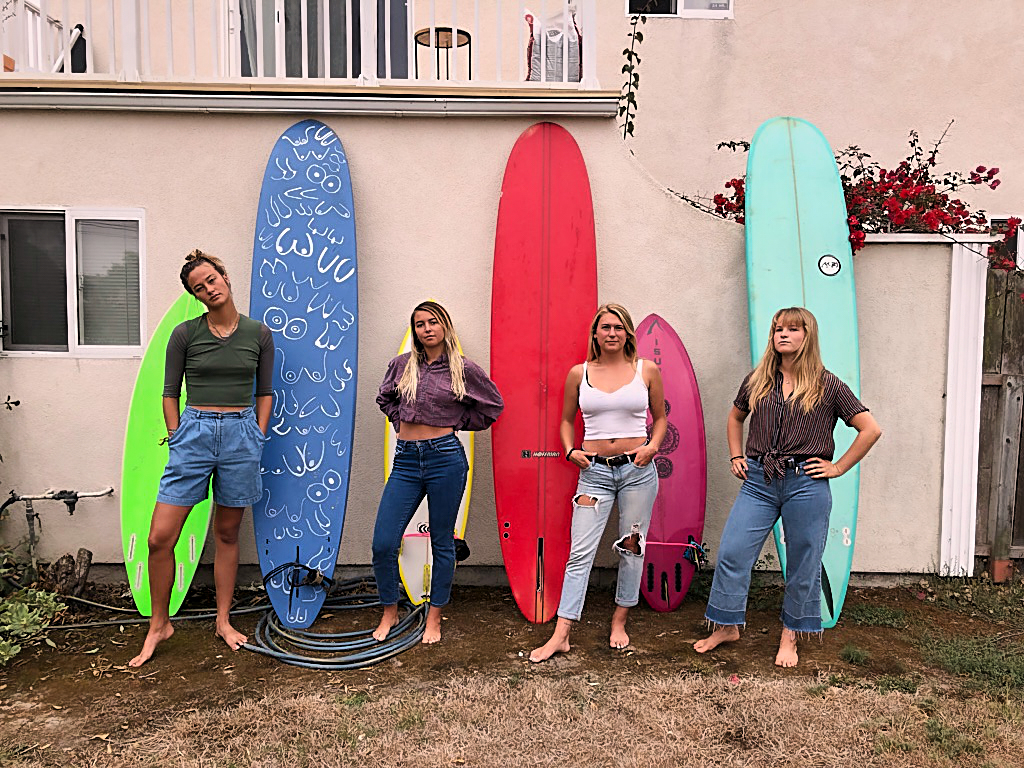 UC Santa Barbara is undoubtedly a surfer’s paradise. Nestled in the Central Coast, Isla Vista is only a short drive from iconic surf locales like Rincon, Emma Wood, C Street and Jalama, while also boasting its own local gems like Sands and Devereux. The easy access of some of the best surf spots on the West Coast is one of the primary reasons fourth-year Surf Team members DaniRose Hill and Jessica Bixby chose UCSB over schools like UC Berkeley, where they were both accepted.

“I think just coming to Santa Barbara, and feeling how welcoming this community was, has to do with how close we are to the water,” Bixby explained. “I knew that my soccer career was coming to an end, so when I was visiting schools I was like, ‘I could start surfing all the time if I went here.’ So I think that a huge factor for me was like I can be in the ocean all the time in Santa Barbara.”

“The water is what keeps me mentally balanced and happy, and I knew that I wanted to be around it,” Hill added.

Even though I.V. may seem to be a haven to those who share a love of the ocean, struggles for female surfers lurk just below the surface. Kaira Wallace, co-captain of the UCSB Surf Team, noted that sexism runs rampant — even in a tight-knit community so focused on positivity.

“I feel like you definitely have to prove yourself a little bit more. Every time I go out I like thinking in my head like, ‘Don’t fuck up.’ Cause if someone’s easy to fuck up then they’re not going to take you seriously,” she added.

Lily Day, a fourth-year Surf Team member agrees. “I feel like you really have to earn your place. You’re marked from when you first paddle out. The first wave is so important, because if I fall or eat shit, then all the guys know they can drop in on my waves, or won’t respect me,” Day said.

The gender barrier didn’t completely dissipate within the confines of the team. Even outside the water, gender roles in years past caused tension amongst team members.

“There was a tendency for some older guys on the team to have the position and kind of play the mascot in this role, of getting to do the fun things and shout into a megaphone and kind of get all of the credit,” Hill noted.

“But behind the scenes they weren’t running any of the logistics and a lot of the girls for a lot of years had the job of being the bitch. We were the ones that were pestering people and getting things done and kind of doing all the grunt work that isn’t fun and doesn’t make you likable,” she said frankly.

The gendered aspect of the sport is nothing new to the women. Growing up, all of them faced similar experiences of discrimination on the basis of sex. It certainly didn’t help that by the time they reached high school, the number of female surfers dwindled to a number you could count on one hand.

“As soon as you got into the high school surf team there was like maybe one or two other girls on the team tops,” Hill said.

Even though they constantly found themselves outnumbered during their formative years, the women all held out hope for a more female future in the sport.

“In some ways it was a lot harder to build confidence because I wasn’t doing it alongside other girls. I always knew that I was like standing alone and navigating it alone, despite guy friends that I had,” Hill said.

“I didn’t feel like I had that pack to lean on. I didn’t have other girls to look up to to go, ‘Oh, I can surf like that one day.’ I could only find that really through the media. But in another way, at times, I derive confidence from it just because I knew that one day there would be more girls, you know, if those few people that are on the team don’t keep surfing, then there will be no foundation for more girls.”

In spite of the negativity, both Bixby and Hill recall their late mentors — Bixby’s father Mark and Hill’s coach Stan Searfus — both of whom helped normalize women in the water.

“The first time I really felt my gender in the water, my mentor Stan saw how excited I was to surf. He invited me on a six-mile paddle and I was the only girl there. And some of the guys were kind of surprised that I showed up. There was classic boy banter. I wasn’t supposed to hear it but one of them said, ‘What is she doing here?’ Stan went up to them and said, ‘Well she’s out here, she’s doing this paddle and she’s going to be surfing with us, so get used to it,’ and that was so foundational to me.”

For the women, the UCSB Surf Team proved a massive improvement, boasting a whopping five women their freshman year. It has since grown to more than 20.

“I think each year it’s just more exciting. Getting to college, I remember even being so stoked to be on a team with like five girls — that was mind blowing. And then the next year it was 12 girls at a competition all surfing together, like in the water dominating the lineup. Each year it’s increasing and it’s just makes you feel so much more comfortable in the water. People are more accepting and it’s more fun environment. Whereas I think when there’s too many men present, it just feels so competitive and like quiet. But I think women really liven up that environment,” Bixby concluded.

Even though the surf team has increased four-fold since Hill, Bixby and Wallace first joined the team in 2016, the fight for equality isn’t over yet. When asked to give advice to future generations of female surfers, Wallace doesn’t mince words.

love this so much! props to all the female surfers out there not taking shit from anyone!

It’s been awesome surfing with you girls all these years! I love the energy you all bring!

What an amazing article highlighting amazing women. It’s incredible to see UCSB’s female surfers pioneering the way forward for other women in the sport. Challenging the status quo is never comfortable, but the benefit to future generations is invaluable. The Isla Vista community owes them a great deal.