In a recent study published in eLife, UCSB scientists have found that while the end result of embryo formation may appear the same, the assembly instructions can vary widely between individuals of one species. 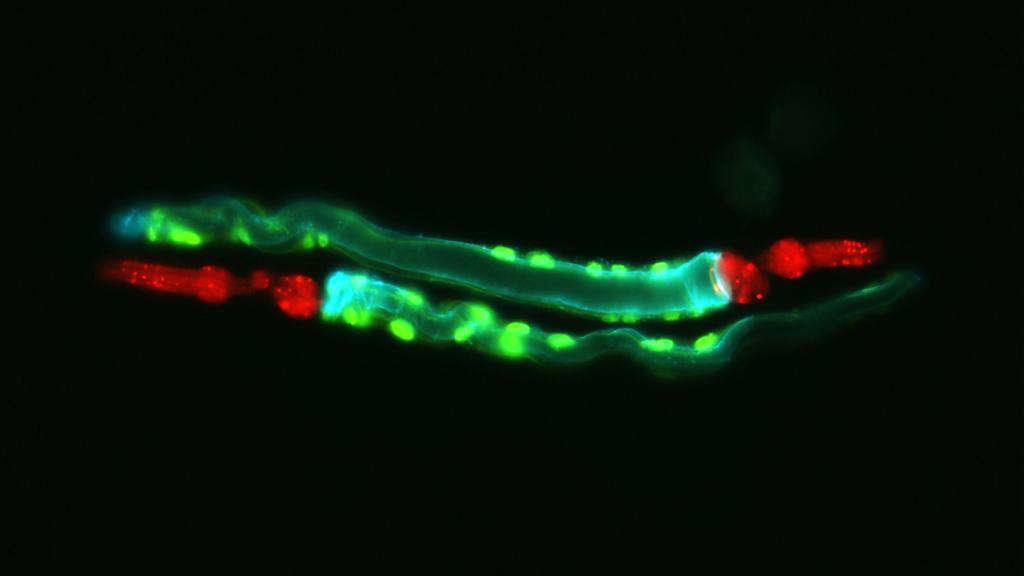 They tracked the development of the endoderm layer, which eventually gives rise to the entire gut. Two genes, skn-1 and mom-2, were thought to be key regulators in this process.

“When you’re trying to assemble such a complex organism, you follow a sequence of instructions. You have a defined assembly manual and instruction manual to put things together,” Pradeep Joshi, a senior scientist in the Rothman lab and co-author of the paper, said. “In specifying the gut, there are key transcription factors whose role has been shown to be extremely critical throughout evolution from Hydra to humans.”

Because the hermaphrodite worm contains exactly 959 cells, the researchers can track the lineage and fate of each cell during embryonic formation. Using the technique of RNA interference (RNAi), they can selectively switch off the expression of native gene function. This allows for the rapid discovery of gene function.

In observing this phenomenon in various strains of C. elegans, the investigators began seeing different phenotypes. Some animals developed no gut at all, indicating that the non-expressed genes were essential to their gut development. In others, a gut developed even when one of the critical components was knocked out, meaning these assumed critical genes didn’t play an active role in building a gut.

This discovery disrupted the scientists’ understanding that these genes were absolutely required in nematode gut formation. Furthermore, it demonstrated that the underlying genetic circuitry can work differently between individuals of the same species but still produce similar results.

“[We] thought that evolution would act gradually and from species to species as they evolve. You can think of rewiring the genetic circuitry, the genetic network and then some genes become critical, some genes become less critical as they evolve. But to think that between individuals of a given species, to find such variation in how you are built, seems quite counterintuitive and was quite surprising to us,” Joshi stated.

This may be nature’s way to have built-in redundancy or a failsafe. It’s similar to the idea that if the brakes of a car fail, the vehicle can still be stopped using the handbrake or ignition switch, Joshi described.

“Nature has incorporated a lot of failsafe mechanisms, redundancies, such that when something goes wrong, it can still get through and develop into a normal organism.”

Because humans and other vertebrates share a common regulatory mechanism for endoderm development with nematodes, the study’s results may have potential implications for drug therapies.

“This basically then gives us a window into why individual humans show such differences in responses to drugs,” he continued. The study may help explain why a drug may be noneffective in one patient but cause hypersensitive or even adverse reactions in another.

“It might not just be limited to how a particular drug is metabolized in individuals, but actually how the underlying genetic pathways function, say, in different cancers from different tumors in different patients,” Joshi explained.

This fits in with the current age of personalized medicine. In treating cancer, for instance, it is becoming increasingly common for the tumor to be genotyped to see if certain biomarkers in critical genes are upregulated or downregulated as a tissue. This can help inform what effective therapy can be carried out for that particular patient, according to Joshi.

“It’s no longer the standard that you come in and we’ll blast you with radiation, we’ll blast you with chemotherapy and then just randomly kill everything…now you see more gentle, more targeted treatments, less severe side effects and also we’re seeing higher and higher success rates … [of] beating cancer,” he said.

The Rothman lab plans to further investigate why some nematode individuals do not seem to require specific critical transcription factors for gut development while others do. Joshi hopes to also answer questions such as does this fundamental toolkit, because it is used in multiple scenarios including to specify the nervous system and muscle cells, modify other networks?

Joshi said, “Right now, we have just stumbled on the fact that, yes, the genetic pathways are vastly modified between individuals within the same species. That makes sense as to how has evolution acted on those species. [But] is there a trade-off? What are the other compensatory changes that have occurred to ensure a perfectly functioning perfectly normal gut … [and] a fine, healthy individual?”