The Daily Nexus
News
50 Years: Isla Vista’s Role in the “Countercultural Revolution”
October 3, 2019 at 9:35 am by Katherine Swartz

Editor’s Note: This year, UC Santa Barbara marks 50 years since the 1969-1970 school year — a time known for political unrest and high tensions between Isla Vista residents and local law enforcement. The Daily Nexus is running a series of articles reflecting on the time period, what has changed since and how it affected the current state of activism at UCSB.

UC Berkeley may be remembered for the Free Speech Movement, but UC Santa Barbara and Isla Vista’s histories are defined by the 1970 riots. 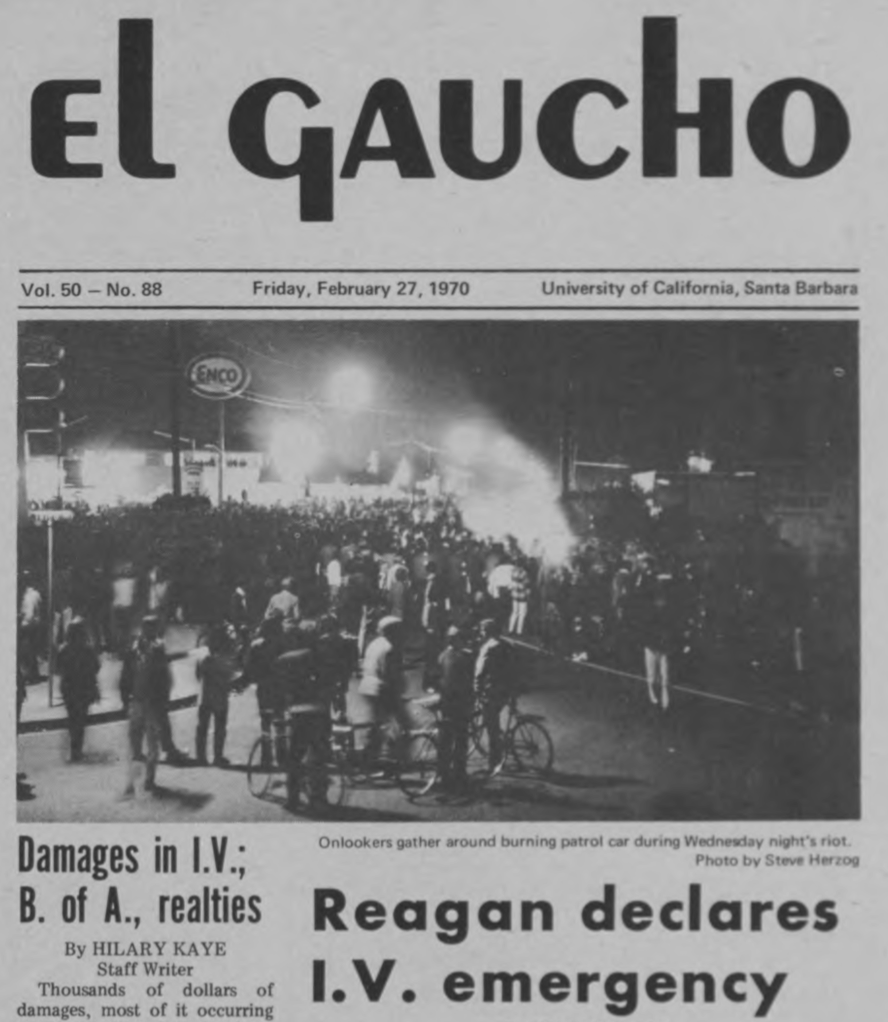 1965 to 1970 marked a five-year period where the United States was transformed by the Vietnam War and civil rights protests. But these national events weren’t just headlines to the students of UCSB; at the time, male college-aged students were being drafted in droves for the Vietnam War, the 1969 Santa Barbara oil spill saw an outage that would later lead to the modern environmental movement and four college students had been killed by National Guard soldiers during an anti-war protest at Kent State in Ohio.

Isla Vista quickly became a countercultural hub, in part because of the high student population and small-town nature that made the area a breeding ground for political activism.

“We just felt like the country was on the verge of a revolution. It was easier to feel that way when we’re all in a center of a refuge of like-minded people like here in Isla Vista,” Steve Byrd, who attended UCSB between 1965 and 1970, said.

The anti-war movement at UCSB and Isla Vista differentiated from movements at other universities during the period, Byrd said, in part because of the violent tensions that led to the burning of the local Bank of America building, the death of a student by the hands of police and the deployment of the national guard by then-governor Ronald Reagan.

Byrd, a senior at the time, had a front row seat for it all.

He described the hippie movement in the area as “peaceful” — at least until January 1970. The rest of the 1969-1970 academic year was marked by three distinctive phases of rioting, culminating in June with the arrival of the National Guard and the arrest of 10% of Isla Vista’s population one week before final exams, Byrd said.

The event that sparked the violence of 1970 is arguably the most nationally well-known event in the university’s history: the burning of the Bank of America building in Isla Vista.

“The government was continuing the same old way … they just wouldn’t change. They just kept on doing the same thing, kept on being involved in the same imperialistic overseas wars, no matter how much people protest it. At the time, the Bank of America … it came out they had extensive investments in the Vietnam War and profiteering off the Vietnam War.” 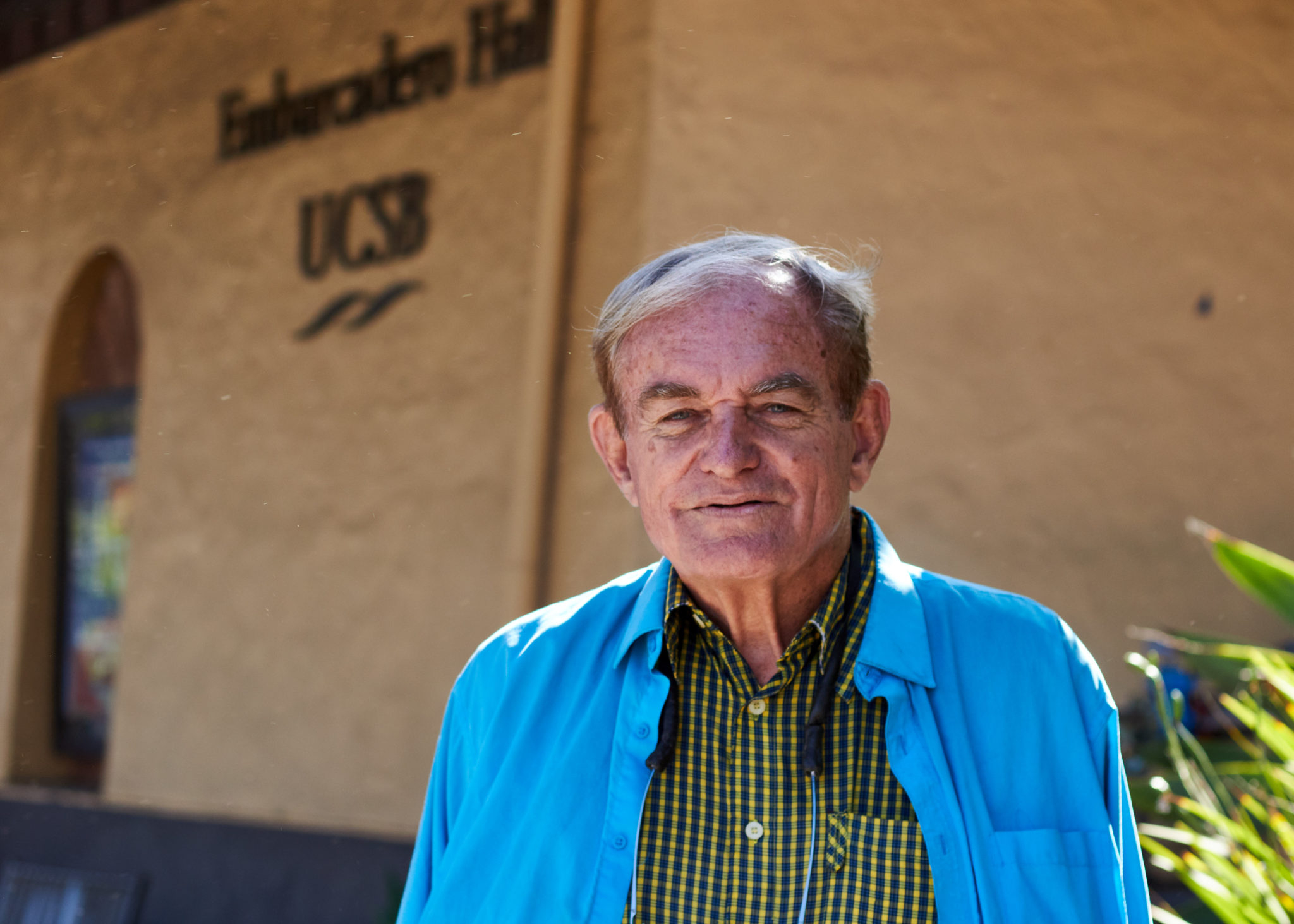 Byrd stands in front of Embarcadero Hall, the former location of the Bank of America building that burned down in 1970. Katherine Swartz / Daily Nexus

A crowd of “a few hundred” gathered around the Bank of America building in Isla Vista, the current site of Embarcadero Hall. They broke windows, grabbed furniture out of the building and made a large pile, lighting it on fire.

Immediately, police from surrounding towns were brought in the area, and Byrd remembers their “aggressive” behavior toward all of Isla Vista.

After three days, students “ran [the police] out of town,” according to Byrd. But the violence of 1970 was far from over. Just a couple months later, in mid-April, police killed UCSB student Kevin Moran who went to help put out fires started by rioters. Moran shouted, “Don’t shoot at us — we’re putting the fire out!” according to El Gaucho, a former version of the Daily Nexus.

According to Byrd, police initially tried to blame Moran’s death on student snipers.

“They told all the students snipers had done it for the first several days and things like that. And then it only came out out over time that the police were the one who had actually done it. But then the thing was [the officer] was never indicted for it. He was never indicted even for negligent manslaughter or anything,” Byrd said.

“He never had to answer for anything in the criminal justice system, which I guess was real typical. That didn’t set too well, back then at all either.”

Violence between police and students continued to escalate at college campuses across the country, inflaming already strained tensions at UCSB. 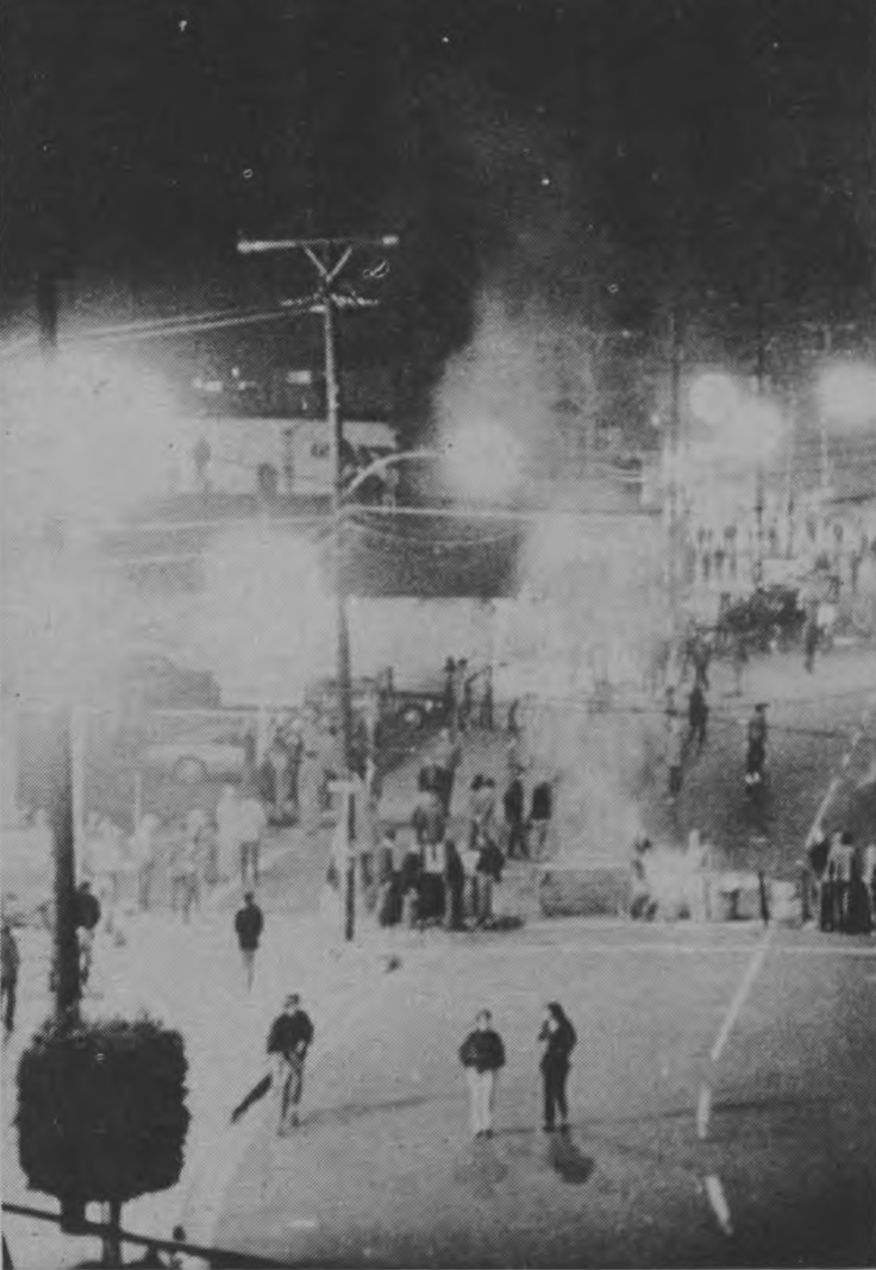 Byrd remembers that he and his friends were stopped by police on a daily basis. This stemmed from a deeper distrust he observed between the older and younger generations during the late ‘60s and early ‘70s.

“We used to get stopped by the police all the time, you know, just for being young, just for being counter-cultural looking a little bit. I really noticed the difference now that I get older, because I’m just not stopped for no reason like I was when I was young.”

During an especially tumultuous period at the end of June, right before finals, over 1,000 people were arrested in Isla Vista for violating a temporary curfew, including Byrd.

Byrd recounted his own experience of being arrested for being out past curfew, describing the “aggressive” nature of policing at the time.

“The police would go and start ‘bam, bam, bam’ on your apartment door. They’d knocked down the door and to smithereens. And they’d bust in and people would be hiding underneath their beds and in the shower in the bathroom. They’d come and then they say you’re violating curfew after they yanked them outside of their own house and then take them away to jail.”

Byrd said he was held overnight with “40 people in a cell for four people.”

“We were just crammed in like sardines into a cell where you couldn’t even lay down or even hardly sit down,” he said.

“They were violating the Constitution. They were inflicting punishment before trial, before being found guilty, just inflicting their own revenge kind of punishment on arrest.”

The perceptions of Byrd and students at the time weren’t reflected in the national media coverage over the course of the 1969-1970 year; a New York Times column published in August 1970 described Isla Vista as a “ghetto,” blaming students for the violence.

“The mere words ‘University of California’ on the ballot, in the current public mood, would probably doom a modest subsidy to cure cancer,” columnist Winthrop Griffith wrote at the time.

Byrd believes the media focused solely on the violence, ignoring the peaceful protesting of students and deep political values against the war that motivated their actions.

“It was a stereotype that sold newspapers. It’s so media, you know, it’s the way the news media always is. They write up the sensationalistic thing to get readership up. And by stirring the pot, by making the young people into the troublemakers and everything, it’s just a stereotype that most older people had,” he said.

This five year-period of history of UCSB’s, and the nation’s country, may as well be a snapshot in history — a time when the country was at war and the culture was rapidly changing. Isla’s Vista’s student-dominant environment stood out against the landscape of Goleta and Santa Barbara, where adults looked down on the “hippie” look and lifestyle of UCSB students.

“All the young people clustered here and they feel like this was their safe space, in Isla Vista,” Byrd said.

“When I first came to Isla Vista in 1965, it was a very different place, almost a 1950s preppy place. Then it changed just in a couple of years to this big hippie revolution and all the countercultural revolution.”