“Have you gotten number three yet?” Julia blurts out. I am jolted out of the chaotic world inside my head and my focus is brought back to Earth. I try to divert my attention back to my sedimentation and stratigraphy lab packet.

Will, the most persistent of us all, declares with fastidious resolve, “It’s a ripple.”

Shit. I erase my scribbled writing of the word “dune” and begin to replace it with “ripple.” But I write the first “p” too small and you can barely see any space inside the circle of the top segment of the letter. That means there is no space for air. That means suffocation. I erase it fervently, sending eraser shavings all over the table, and try again. 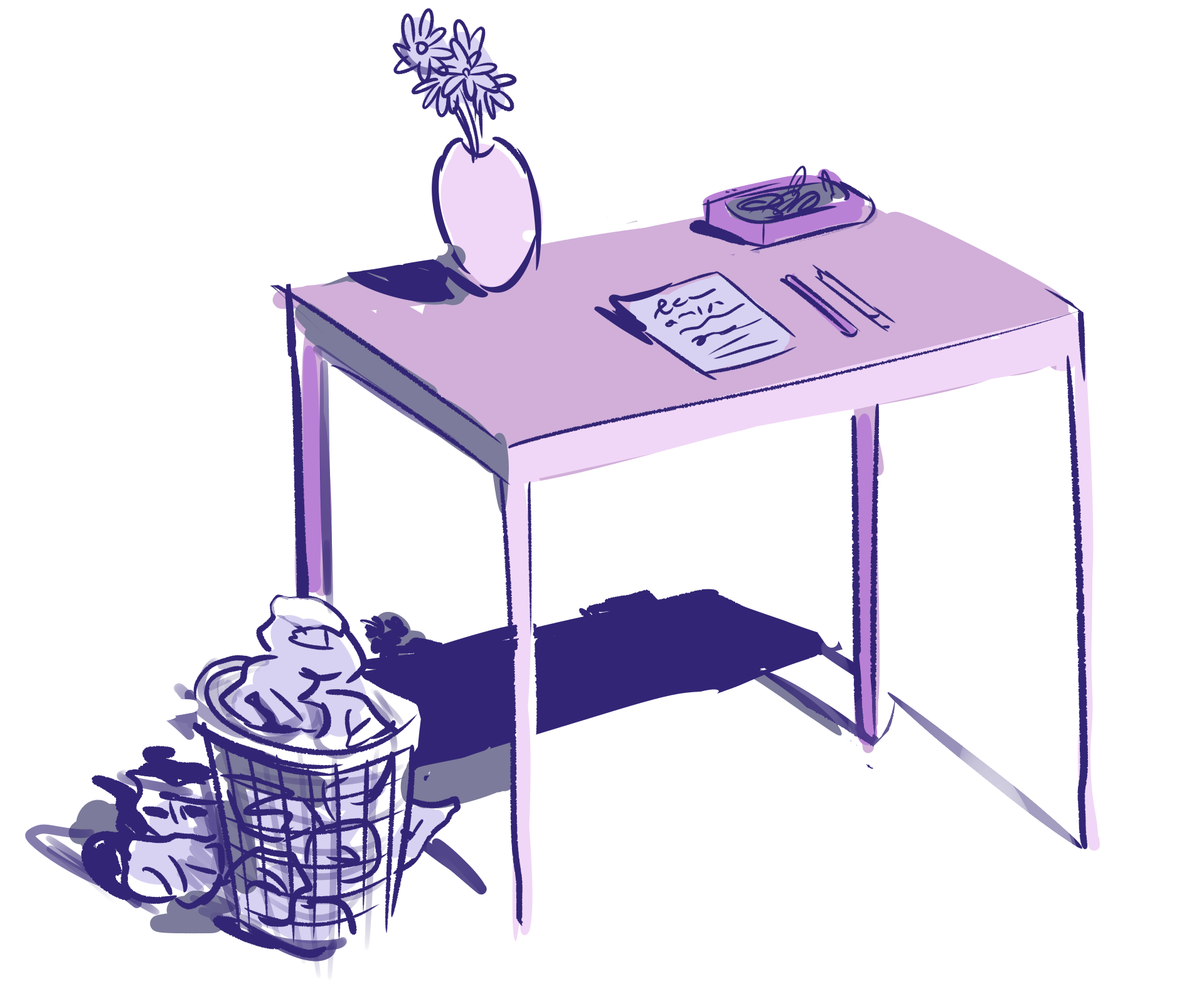 Except now I’ve only erased the “p” and the rest of the word is left tainted by my mistake. I have to rewrite it completely so that maybe, just maybe, it can be reborn into something good.

Again, I scribble out “ripple.” Fuck me. In my frustrated scribbling, the circular space inside the “p” is now odd and way too big for the rest of the letter. It looks like a bad boob job sitting next to the normal second “p.” The way I wrote it this time doesn’t make me feel like I’m going to die or suffocate; it just looks like utter shit.

Anyone, even someone who had never felt the implications of obsessive-compulsive disorder (OCD), would erase this “p.”

I erase even harder this time, so the page doesn’t carry residual markings of my last two fuck-ups. After all, if the past two copies remain noticeable on the page, then it’s like they’re still there and they could still bring something bad. This time I write the word out so fast with my eyes looking towards the white board of the classroom. Maybe if I don’t look it will turn out fine. And aha! It looks almost normal. But my mind quickly suckerpunches me by pointing out that my refusal to look at the page as I wrote out the word “ripple” a third time meant something bad could happen to my sight. I look to Julia, sigh, and tell her no, I haven’t gotten the answer to number four, as I erase and rewrite the word “ripple” for hopefully the last time.

The world keeps spinning. Life goes on. The people around me in class complete their labs with ease. But I remain trapped in the confines of my own mind. Erasing and re-erasing words I wish I could write just once. I’ve been this way ever since I can remember. It doesn’t faze me now. So much so that my compulsions and any evidence that I have OCD is almost completely unnoticeable to others. No one, especially not my peers, can see the the war constantly being fought within my head. But every day I hope that the part of my mind that knows that these compulsions are ridiculous will win out over the part that is afraid of what will happen if I don’t give into them.

Obsessive compulsive disorder isn’t uncommon; in fact, 1 in 40 adults in the U.S. and 1 in 100 children have this disorder. That’s nearly 2.3% of the U.S. population. 2.3% might seem small, but that means there are millions of people in the U.S. fighting the same fight inside that I have been losing for years. That means thousands of college students that are trying to get through classes without driving themselves crazy too.

This form of treatment involves repeatedly exposing yourself to the fearful thoughts that influence your OCD and then refusing to give in to your compulsions.

In my desire to find a solution to my self-diagnosed OCD, I came across an opinion piece in the New York Times written by Wajahat Ali. What caught my eye was when she talked about how she hosted live TV shows and gave speeches in front of huge audiences, and no one could have ever guessed that she was constantly tortured by disturbing thoughts because of her OCD. This made me feel close to her because of my own similar struggles. Hardly anyone, even the people closest to me, notice my compulsions or are aware of the twisted way my mind runs away from fear.

But what really struck me was when she wrote about her interaction with David Adam, author of the memoir “The Man Who Couldn’t Stop.” Adam managed to treat his OCD through a form of behavioral therapy called exposure and response prevention. This form of treatment involves repeatedly exposing yourself to the fearful thoughts that influence your OCD and then refusing to give in to your compulsions. Instead of granting yourself that short-term relief, you have to just sit with the fear. Over time, if your brain recognizes that nothing bad is happening to you when you resist your compulsions, it will recognize the compulsions as harmless and unnecessary. Ali writes that your brain will begin to realize that there is nothing to fear.

For years, without realizing it was a form of treatment, I had attempted confronting my compulsions in this way. Sometimes I was successful but never for long. I could make it maybe five minutes before becoming overwhelmed with anxiety and giving in to my compulsion. At the time, I didn’t believe that resisting the compulsions over and over again could eventually treat me. I didn’t know that I could treat myself. I thought I’d need a psychiatrist and a prescription.

But then I began writing about my experiences and putting my OCD out there in the open for others to see. And that helped me make the conscious choice to begin treating myself through exposure and response therapy.

I am happy to report that since I started writing, I have begun to confront the lurking fears and have refused to give into my compulsions. I have felt virtually unphased by OCD in my daily life and truthfully believe that I am on the path towards successfully treating myself through exposure and response therapy.

Every day I feel closer to the person that I really am, courageous and brave, uninhibited by illogical fears. I have Wajahat Ali, David Adams and myself to thank for that.

Lily Day is an advocate for Gauchos being open about their struggles with OCD.

deal with this serious medical condition by yourself. Good job dont see a professional to get help that you obviously need