The Daily Nexus
News
UC To Divest From Fossil Fuels, But Climate Activists Say This Is Only The First Step
September 19, 2019 at 12:12 am by Sanya Kamidi and Evelyn Spence

The University of California system will soon divest its money entirely from fossil fuels, two of the UC’s top financial officers announced in an op-ed in the Los Angeles Times on Tuesday.

For climate activists across the UC system, but particularly at UC Santa Barbara — where Chancellor Henry T. Yang was the first UC chancellor to take an active stance in favor of divestment, and the student government and faculty senate were the first in the system to support divestment — the victory was lauded. 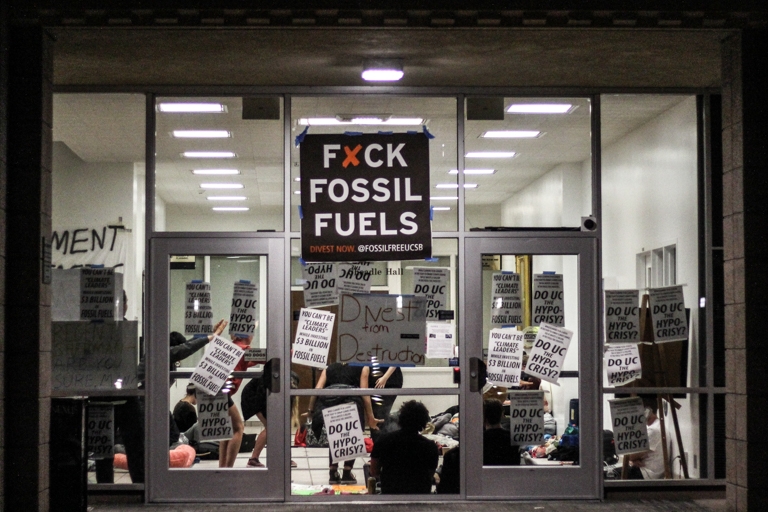 The money is composed of a $13.4 billion endowment and a $70 billion pension, and will be divested “as of the end of the month,” and “soon” respectively, the authors wrote.

The two financial officers, Jagdeep Singh Bachher, the chief investment officer and treasurer for the UC and Richard Sherman, chair of the UC Board of Regents Investments Committee, emphasized that the decision was not made because of “political pressure,” but because of financial reasons. However, the two acknowledged that some may “see our action as born of political pressure, or as green movement idealism or perhaps political correctness run amok.”

“So be it,” the two said in the op-ed. “We are part of a university system where diversity of opinion thrives.”

“We have chosen to invest for a better planet, and reap the financial rewards for UC, rather than simply divest for a headline.”

But several activists at UCSB, including some of those who were present at the 72-hour protest held in Cheadle Hall in 2017 by Fossil Free UCSB, said the UC’s decision to divest stemmed from years of student and faculty activism across the campus.

In particular, they believed a recent vote held by the UC Academic Senates, which found 77% of senate members wished to divest from fossil fuels, was a leading factor as opposed to financial reasons.

UCSB Ph.D. student Emily Williams, one of the founders of Fossil Free UC and a part of the Cheadle Hall protest, said she was “speechless and overwhelmed” at the news but denounced the claim that the decision was done for “purely for financial reasons.”

“They have to say that,” Williams said bluntly, explaining that she believes if the UC said they had divested from fossil fuels for moral reasons rather than financial reasons, there would be “mounting pressure” to divest from other movements like the Boycott, Divestment and Sanctions (BDS) movement.

Williams noted that Bachher and Sherman’s argument that fossil fuel investments are risky is something that the Fossil Free UC movement has been arguing since its inception.

“Them making that decision was really the result of years of students and faculty and alums, finally chancellors getting on board, really advocating for this,” she said. “They wouldn’t necessarily have even given this a look had the campaign not have advocated for it so strongly.”

“I’m just happy to come to some closure on this, it’s been a fantastic movement,” Foran said. “It should not have taken, of course, six years. We’re not delighted by the reasoning given by the Regents, that it’s [a] purely economic decision, we think that’s kind of not true.”

“It doesn’t acknowledge the fact that there was a movement demanding it, without which we wouldn’t be here.”

Fossil Free UC was founded by students across the UC system in 2012. For the past several years, the group has held demonstrations at campuses including UC Berkeley and UCSB, all to encourage the Regents to divest from fossil fuels – but LeQuesne emphasized that it has been a long path to victory.

He explained that around 2015, the group changed its strategy, moving toward “mobilizing the community approach.” They decided to get “more disruptive,” he said – “a more disruptive kind of movement, build approach necessary to really get the Regents to pay attention to us.”

The group organized across UC campuses, campaigning to get all student governments to endorse the divestment and organizing sit-ins. LeQuesne emphasized that one of the movement’s biggest successes was the 2017 Cheadle Hall sit-in, during which over 100 students sat in Cheadle Hall for over 72 hours until Chancellor Yang agreed to endorse students’ demands for fossil fuel divestment.

Williams, who was present at the sit-in, said it was “powerful” to be there in that moment.

“There’s a bit of nervousness because what you’re ultimately doing is civil disobedience,” she emphasized. “You’re doing something that is against the rules, but you’re doing it because you have so much respect for the institution and for the cause that you’re working on that you really feel like you need to take a step and do something, draw attention to it and make a change.”

While climate activists at UCSB were happy to finally see the Regents take tangible action for climate justice, Foran said divesting from fossil fuels is only the first step for the UC in the “overarching global climate justice movement.”

“This is a small step in a long journey,” Foran said. “We’re up against the most powerful corporations in the history of the world and the governments they control.

“But today is a good day in that struggle.”

For Macy, who was a first-year student during the 2017 sit-in and is now entering her last year at UCSB, her next steps are to ensure the UC “follow[s] their promises and fully divest,” but she’s also working on refilling the ranks now that many climate activists have graduated.

Foran and Williams also pointed to the Sunrise Movement as the next generation of climate activism at UCSB, and Williams referenced the global climate strike scheduled for Sept. 20-27.

“[This is] for the fate of the planet. The fate of humanity is at stake here, so we’re glad we could nudge the Regents to do the right thing, however begrudgingly,” Foran said.

The real question is, why didn’t we do this decades ago?

There are some pretty good dividend payers in the fossil fuel group. Just don’t ask the taxpayers to make up the difference.

This is a nice token, but does nothing. The oil companies go on. The world’s biggest polluters, China and India won’t change. The root cause of the current level of pollution is over-population. In Calif, the biggest breeders, according to health dept data in SB, Ventura, and LA county are Hispanics. Of course, I will be called a racist for pointing that out.

How stupid. Meanwhile, keep traveling by air and auto, cooking with gas and electricity, and using your plastic water bottles and iPhones.

We live in a political/business climate in which alternatives to fossil fuel based products are actively discouraged. So, your suggestion is that we avail ourselves of nothing — in the majority of cases — in response to the active business and political situation that intentionally disallows development of eco-friendly alternatives.

“How stupid” indeed! But you misplaced the the target of the stupidity (hint: get a mirror and stare into it).

Three of the world’s biggest oil companies, Shell, BP and Chevron are investing collective billions into renewables in 2019.