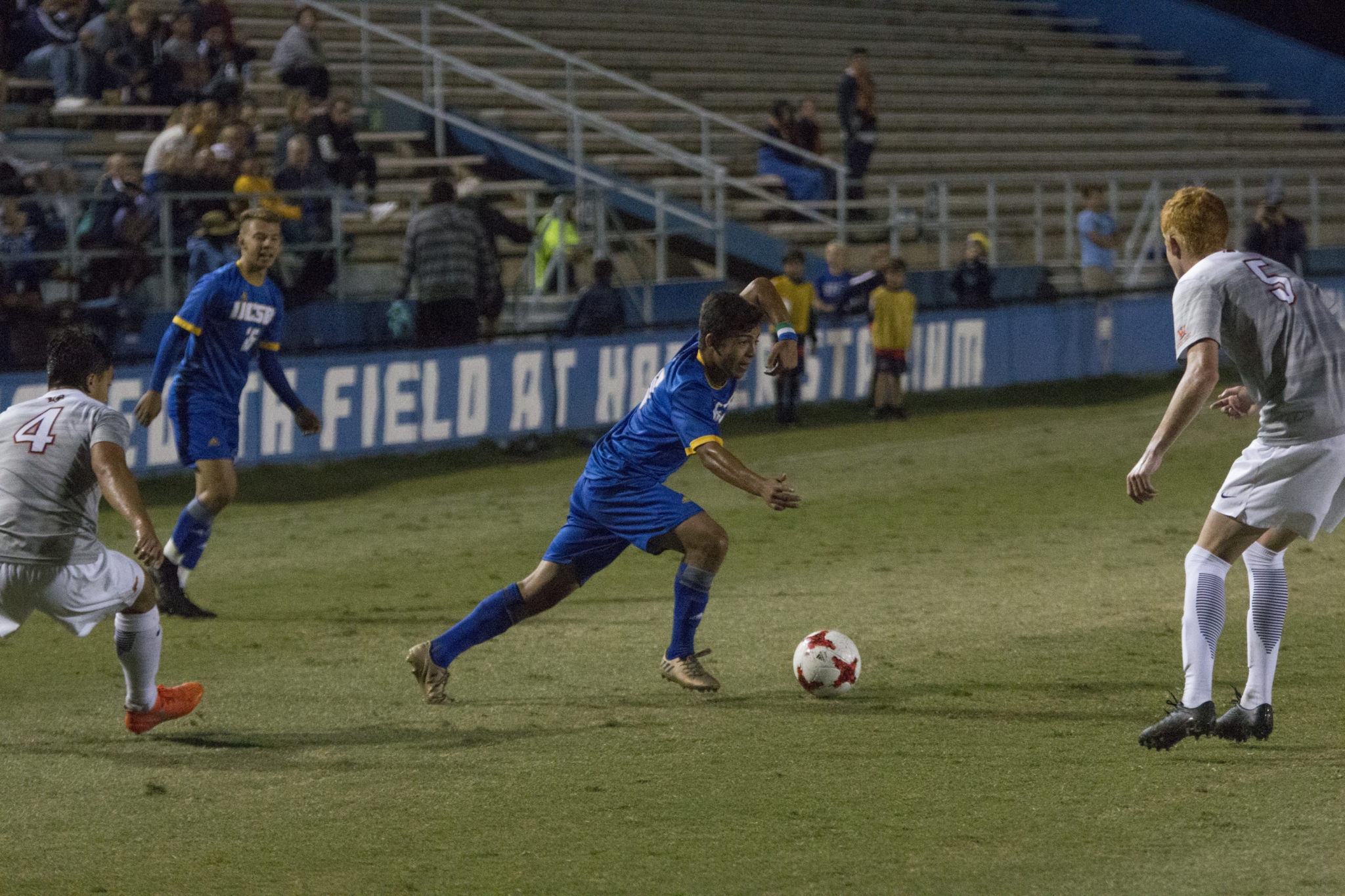 The UCSB men’s soccer team picked up their second win of the season Thursday night, beating the Gonzaga Bulldogs 1-0 in a chippy matchup. The Gauchos moved up to 2-2 with the victory while the Bulldogs fifth straight loss dropped them down to 0-5.

The conversation surrounding UCSB these last couple weeks has been dominated by speculation on how the team was going to be able to survive with key absences on the defensive end. In the past two games, the Gauchos have had to play without the entire starting backline and gave up six goals, or half of the goals they let in all of last season.

While freshman defender Lucas Gonzalez and senior defender Faouzi Taieb are still out with injuries for the foreseeable future, the Gauchos got back defensive stalwarts Noah Billingsley and Hunter Ashworth from international play, and they made a huge difference in last night’s game.

The Gauchos were on the attack from the jump on Thursday night, seemingly emboldened by their new-look defensive line to play a more aggressive brand of offense.

No one took advantage of this free-flowing style of play more than junior transfer Ameyawu Muntari, who simply controlled the left side of the pitch for the first 15 minutes. The Ghanian forward almost picked up his first assist of the season just five minutes in, when he burned a Bulldog defender on the left wing and lobbed in a cross that narrowly missed the leg of Gaucho forward Rodney Michael.

UCSB was able to settle in, slow the game down a bit and play more of a possession style offense in the first half, something we hadn’t really seen from the team this season.

Ashworth and Billingsley’s ability to calmly yet forcefully bring the ball up from the defensive end was key to opening up the field for the Gauchos. The game must have looked slow for the two defenders after having just played with some of the best young players in the world as part of the U-23 New Zealand international team.

Billingsley in particular seemed to always be just a step ahead of the Bulldog players. In the 36th minute he took the ball up from the defensive third, crossed over three Gonzaga defenders and snuck a pass to a streaking Thibault Candia, who set up Muntari with a perfect pass which he curled just to the right of the goal. The senior did a great job of balancing his offensive attacks with smart defensive plays, something that Gauchos had been missing in these last couple games.

UCSB didn’t score in the first half but dominated possession. The team took five shots as a whole, only gave up one shot to the Zags and sophomore goalkeeper Ben Roach did not have to make a single save in the entire period.

Although their record might not show it, the Bulldogs are a tough team and they came out strong to start the second half. Gonzaga began to ramp up the pressure on the Gauchos in the first few minutes, but this also left them more prone to UCSB counterattacks.

In the 49th minute, the Bulldogs cleared a UCSB freekick and sent numbers downfield to attack the Gauchos’ defense. Gonzaga midfielder Joe Corner then initiated one of the strangest sequences of the game when his shot ricocheted off the post, was centered back in and almost knocked in for an own-goal by Hunter Ashworth. Ashworth cleared it back out to Corner who slammed a shot straight at Ben Roach who then popped the ball up directly to Bulldog midfielder Frankie Ljucovic, who eventually headed the ball off the post and out of play.

Just as momentum seemed to be shifting to the Zags, the Gauchos finally notched what would be a controversial yet game-winning goal.

In the 57th minute, Muntari took the ball down the right-wing and rocketed a cross straight into the Bulldog defense. The defenders botched the clearance and sent the ball straight up into the air, and both UCSB midfielder Finn Ballard McBride and Gonzaga goalkeeper Cole Rovegno jumped to make a play on the ball only to end up colliding with no call being made. As this was happening, sophomore forward Carter Clemmensen slid through the defense and pounced on the ball when it fell in front of him, knocking in his first goal of the season.

The Bulldog players and coaching staff let the referee have it for the rest of the match, even after a favorable call went their way in the 66th minute when Ashworth got mostly ball on a slide tackle but was called for a foul just outside of the box. Ljucovic struck a curling free kick into the upper right corner of the goal which was saved by Roach. From that point on, the Bulldogs never really threatened again.

This was a great win for the Gauchos as it both stopped their two-game losing streak and gave them confidence for some tough matchups in the next couple weeks. Games against Oregon State, Seattle U and Stanford will surely test UCSB before they start up conference season, but this past game showed that when fully healthy, this team is going to be very tough to beat.