The Daily Nexus
Opinion
Legalizing Psychedelics is the Key to Safe Tripping
September 11, 2019 at 8:00 am by Carley Weiler

When most people think of psychedelics, they think of acid or magic mushrooms. A typical response to these substances falls on opposite sides of the spectrum — from full-on opposition and disapproval to having hour-long conversations about the magical and unexplainable experience produced by psychedelics.

Just the sound of the word “acid” might make people think it should be illegal. The idea of putting something called acid into your body that is supposed to make you hallucinate and potentially take you down a road known as a “bad trip,” causing permanent trauma — well, it’s no wonder that acid has mostly negative connotations. 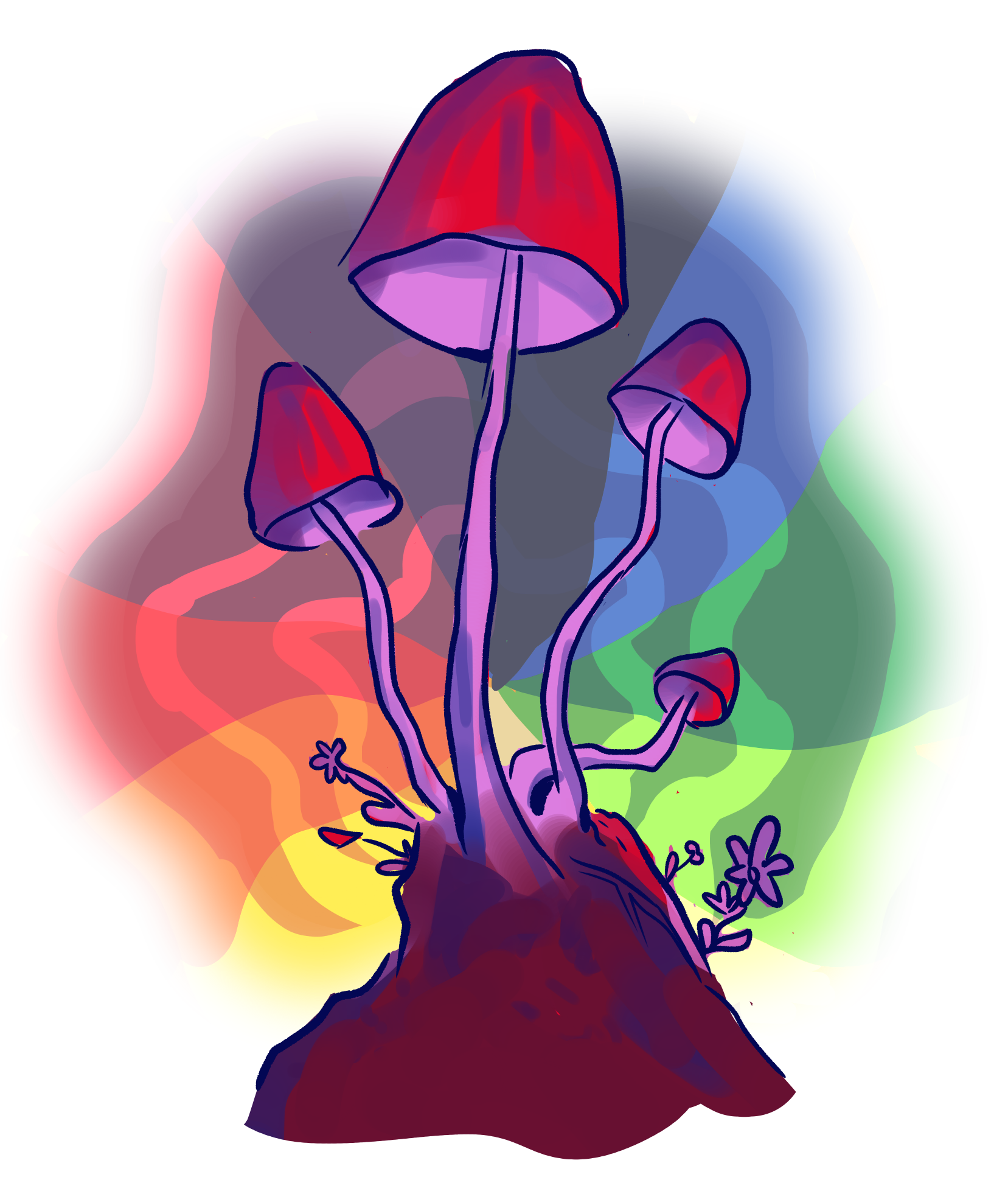 Then there’s the viewpoint where people talk about experiencing an “ego death,” when the body and mind detach from the ego and a deeper understanding of the world is gained through an outside perspective.

Although this might sound like some granola hippie shit, many people I know, and research from several cases, explain how psychedelics can be used for therapeutic purposes, helping with depression, anxiety, addiction, trauma and other mental health issues.

I’m not saying everybody with mental health issues should hit up their drug dealer and buy a tab of acid or take an eighth of shrooms. I would actually advise against that.

I’m all in favor of taking psychedelics, but not when there is such a lack of regulation and knowledge of these substances. That is why they need to be legal. Evidence of using these substances from the past and present indicate that legalizing psychedelics will make taking the substance much safer, as well as improve mental health and quality of life.

To understand the present use of psychedelics, we must look at the past, starting with where the magical substance was first used thousands of years ago. In Northern Africa, paintings of mushrooms on stones and caves can be found dating back to indigenous groups in 9000 B.C. The mushrooms are speculated to be psilocybin mushrooms, a naturally occurring psychedelic found in over 200 species of mushrooms all over the world, commonly known as “magic mushrooms.”

Native American groups like the Aztecs and Mayas also had symbols and paintings indicating they consumed magic mushrooms as well, likely for religious and spiritual purposes. Although it can be controversial because there is no way to officially know if these paintings, sculptures, and carvings of mushrooms are the psychedelic kind, the recurring theme of mushrooms showing up in artifacts through time seem to imply that they are.

The legality of psychedelics aren’t going to stop people who are curious and want to experiment.

Still, for many, this idea may seem too radical and controversial. Just because they were used in the past and are legal in some countries today doesn’t mean taking hallucination-inducing drugs is risk-free. Taking an unregulated drug always poses the risk of it being laced with dangerous substances, and a bad trip can lead to serious psychological problems.

However, keeping these substances illegal is only feeding the problem. The legality of psychedelics isn’t going to stop people who are curious and want to experiment. Not to mention that they aren’t very hard to get your hands on — let’s be real: because of the accessibility and popularity of the substance, people are doing it whether it’s legal or not. If people are doing it either way, legalization will only regulate the drug to ensure it’s not laced with a harmful substance that could lead to physical and mental harm.

Although legalization can’t prevent irrational or dumb decision making, it can help manage the substance so as to ensure its purity. Legalization would also educate people on the safest dosage to take. It’s extremely common for people to take way more than what is considered safe — not out of recklessness, but simply because they lack knowledge. How does one know how many mushrooms to eat or how strong a tab of acid is anyway?

Studies have shown that with the right dosage and environment, psychedelics can help treat mental illnesses.

On top of ensuring the substance’s purity and adequate dosage, legalization would advise people about how to consume it and the risks involved. Distributors of psychedelics could give advice on how, when and where to take them — all of the technical details that don’t seem to matter until you’re tripping at a crowded football game and everybody’s faces look like they’re melting. An altered state of consciousness will always pose risks; however, legalizing substances that produce this altered state is the best way to ensure safe use.

Lastly, and most importantly, psychedelics should be legal for therapeutic and medical purposes. Taken under the right circumstances, they can help heal deep-rooted issues. Studies have shown that with the right dosage and environment, psychedelics can help treat mental illnesses like anxiety, PTSD, addiction and depression. In fact, therapy involving psychedelics have an extremely high success rate; up to 80% of people experienced better mental health after treatment.

It’s been said that the effects of psychedelics change one’s perception of day-to-day life to create a deeper understanding of things as the profound secrets of the universe are discovered. Many people describe opening a third eye as an awareness from an outside perspective shines light on big picture concepts. Superficial thoughts and beliefs disappear and a feeling of unity and one with the universe create a sense of knowing and connection … or so I’ve heard.

To sum it up simply, we want our kids to be safe when they are doing drugs! There is no way to stop people from doing drugs, but there is a way to make sure they aren’t laced with anything toxic that could cause serious harm. On top of safety and preventing harm, the historical and therapeutic uses of psychedelics are unique to anything else in the world. The U.S. is taking baby steps toward legalization as Denver and Oakland have become the first two cities to decriminalized psychoactive plants and fungi. We still have a long way to go, but at least we are starting somewhere.

Carley Weiler thinks psychedelics should be federally legal in the United States to promote safety and healing benefits.

This is an important topic. Thanks for starting the conversation. These are incredibly important substances that have enormous potential when taken in a therapeutic and intentional setting. And the scientific/medical community is starting to recognize this. John Hopkin’s hospital just opened a psychedelic research center and MAPS has done research showing 80+% success rate in treating mental health issues with no side effects vs. pharmaceuticals with <30%. Michael Pollan wrote a NYT best selling book last year "How to Change Your Mind" that goes deep into this topic.

This is embarrassing. Every year it seems the Daily Nexus publishes something like this right when UCSB Freshman and their parents start coming into town. It makes UCSB look like a terrible choice for a school. If I were a parent seeing the official newsletter of the school publishing articles that encourages drug use I would seriously reconsider allowing my child to attend. Secondly, I’m not opposed to legalizing some drugs, including the ones mentioned in this article… but lets not go around pretending that these drugs are helpful for the average person. I know some successful people who have… Read more »

Drugs are tools, and they certainly don’t “always hinder the potential of a user”. I would’ve failed out by now if it weren’t for Adderall binges to help with schoolwork and mushies to help me sort out my emotions. What’s embarrassing are people like you who concede that they have benefits but then revert to their DARE programming and are unwilling to have an honest conversation. Drug prohibition kills more people than it helps. Cartels and the violence that comes with them (>20,000 deaths yearly) wouldn’t have a vacuum to exist in if drugs were legal. Fentanyl overdoses would not… Read more »

Over the past few years, several studies have indicated that psychedelics have incredible results when being taken therapeutically for depression, anxiety, addiction, and other mental health afflictions. Just because successful people that you know were not “successful at the time they were doing the drugs,” the actual helpfulness of the compounds is the rewiring of the neural connections in the brain that occurs while under the influence. These connections are maintained after the drugs have left the body, which leads to long-term positive outcomes. The article never encourages drug use, but rather it analyzes what we know about the subject… Read more »