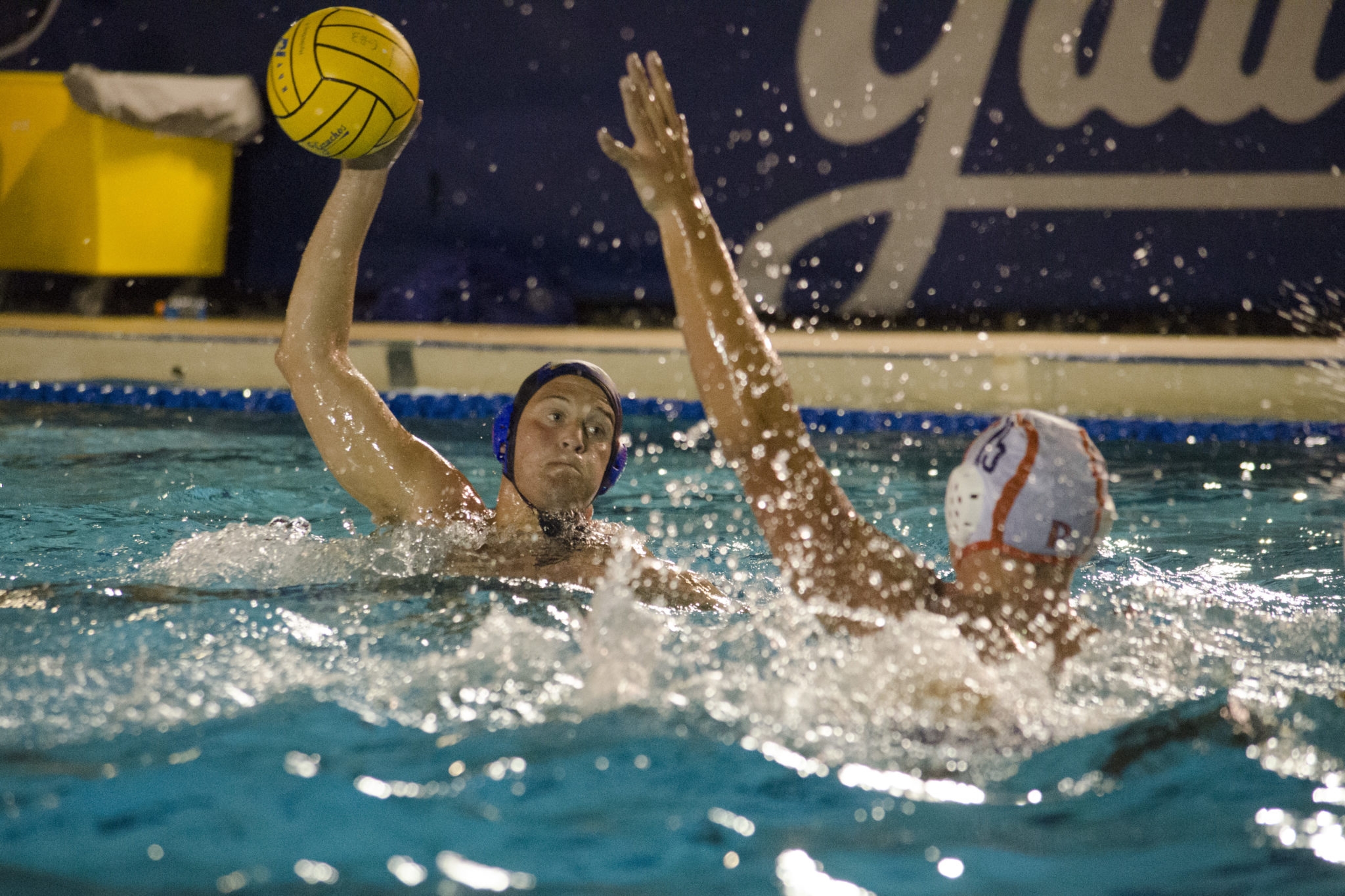 Blocked by a defender, Ivan Gvozdanovic aims for the goal. Nexus File Photo

The UCSB men’s water polo team stormed into La Jolla for the Triton Invitational on Saturday and came out on Sunday with a sterling 4-0 record, their best start in six years. It was the first time UCSB has emerged from the Invitational undefeated.

The No. 7 Gauchos soundly defeated one of their main conference rivals, beat a national juggernaut for the first time in 15 years and went undefeated in a tournament featuring several top-10 ranked teams.

All in all, it was a pretty successful weekend.

Brosnan and Nangle led the team with six goals apiece, while Puentes and Gvozdanovic  followed close behind with five and four goals, respectively. Nangle and Puentes are both underclassmen , giving the UCSB attack the youthful flavor it will be looking for this season to replace Boris Jovanovic, last year’s lead attacker.

The Gauchos opened the Invitational with a 12-7 victory over Concordia, their only unranked opponent of the weekend. Second quarter goals from freshman attacker Nick Taylor and junior driver Marius Jakimcikas pushed the Eagles out to a 5-3 lead early, but it was almost all UCSB from there on out.

Six different Gauchos scored in the second quarter as Santa Barbara erased the deficit and ran up an 8-5 lead going into halftime. Brosnan completed the hat trick with his third goal of the match in the third quarter, and three more UCSB goals in the fourth locked in the victory.

UCSB never trailed in the team’s second game of the day, an 11-5 victory over No. 7 Pepperdine, a major Golden Coast Conference rival. The win gave the Gauchos their fifth straight victory against the Waves, who finished third in the conference last year.

Nangle and sophomore attacker Tommy Hawkins paced UCSB with two goals apiece. Both of Hawkins’ goals came at the end of the second quarter and rebuffed a Pepperdine surge that had cut the lead to one earlier in the quarter.

The Gauchos kept pushing after halftime and added four goals from four different players over the final two quarters. The Waves were able to muster just one second-half goal in response, allowing UCSB to coast to a comfortable win.

Invitation play picked back up on Sunday, when the Gauchos took on their toughest test of the tournament: the No. 4 Cal Golden Bears. Coming into the game, UCSB hadn’t beaten Cal since 2004. They’d come close a number of times, including a 13-12 loss just last season, but it had been a mostly one-sided relationship.

On Sunday, however, the Gauchos ended the decade-and-a-half-long streak with an 8-5 victory.

It was an even match in the first half, which saw UCSB fall behind 3-1 early, then claw back into a 4-3 lead and then enter halftime tied at four, all after a last-minute Cal goal. Goals from Nangle, Puentes, Ivan Gvozdanovic and Ryan Brosnan made for a balanced first half Gaucho attack.

UCSB flipped a switch in the third quarter, however, and left Cal behind with four goals to take a commanding and durable 8-5 lead. Gvozdanovic and Puentes both scored again in the third, and goals from sophomore utility Connor Moynihan and senior attacker Jacob Halle added some breathing room for the Gauchos.

Goalkeeper Danny Roland made sure UCSB didn’t need much of that breathing room with nine saves in the match, including one five-meter penalty shot save late in the fourth quarter.

Riding high from their streak-snapping win, the Gauchos avoided any sort of letdown just a few hours later, as they defeated No. 5 Long Beach State 12-9 for first place in the Triton Invitational.

The victory didn’t just secure first place, but it also allowed the Gauchos to make a powerful statement of conference supremacy. LBSU entered this season tied with the University of the Pacific as the top-ranked Golden Coast Conference team, and they won the conference tournament last year.

The two teams see-sawed through the first quarter. Long Beach State opened up the scoring with a goal from sophomore utility Matt Morris just over three minutes in, but UCSB responded 20 seconds later with a Brosnan goal. The two teams went silent for a few minutes after that salvo but picked up again with a flurry of final minute goals that left the Gauchos ahead 3-2.

While the first quarter was an even, tit-for-tat showdown, the second quarter was more of a Gauchos-only affair. UCSB scored five goals to LBSU’s one and ran out to a healthy lead.

It takes more than one good quarter to beat a top-five team, however, and Beach made that clear with a lopsided quarter of their own in the third. LBSU scored four goals to UCSB’s one, cutting the deficit to 9-7 at the end of the third.

Long Beach State added two more goals to start off the fourth quarter and tie the game at nine apiece. With just two minutes to go, UCSB redshirt freshman center Adam Lott stopped the slide and put the Gauchos back in the lead with his third goal of the tournament.

Puentes found the back of the net just a few seconds later on a penalty shot, and one more insurance goal from senior driver Tommy Fellner gave UCSB their 12-9 victory. Roland finished the match with 18 saves, and Brosnan, Halle and Mason McQuet all finished with two goals each.

The Gauchos travel to Redlands this coming weekend for the Inland Empire tournament where they’ll look to keep their hot start going.