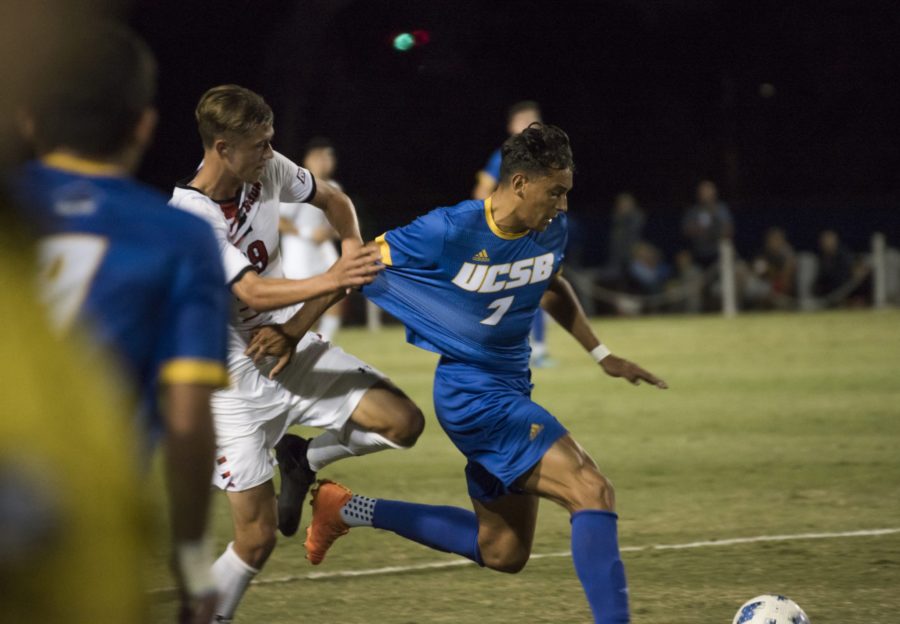 The UCSB men’s soccer team picked up its second consecutive loss on Saturday night, falling to the Cal Golden Bears by a score of 3-0. With the loss the Gauchos now sport a 1-2 overall record while UC Berkeley remains undefeated with a 2-0-1 record.

There were plenty of questions surrounding UCSB’s defense coming into this matchup given the fact that all four members of the team’s backline are either injured or playing for their international squad.

The Golden Bears found the back of the net only 45 seconds into the match when redshirt sophomore forward Alonzo Del Mundo took the ball down the left wing and floated a cross into the box which dropped right in front of senior forward Simon Lekressner, who banged a shot into the upper right corner of the goal.

UCSB’s  back four really struggled to start off the game, especially with crosses coming in from the left wing. Although there were some experienced defenders out on the pitch, like junior defenders Kavian Kashani and William Gillingham, the lack of synchronicity and chemistry that only comes with playing together for extended periods of time made it too easy for the deadly Berkeley offense.

Del Mundo in particular just punished the Gauchos on the left side of the field. In the 14th minute he took the ball down the left wing again and sent a hard cross on the ground which was hammered home by freshman forward Arman Samimi, doubling the Golden Bears’ lead. The Richmond native ended  the first half with a whopping three assists after his corner kick was headed in by junior forward Tommy Williamson in the 33rd minute.

While the defensive woes for the Gauchos at least can be partially excused by some key absences, the larger and more alarming issue for the team at the moment has been their inability to deliver on offense.

On paper there didn’t seem to be too much of a discrepancy between the two squads: UCSB took nine shots with five on target compared to UCB’s 13 shots with six on goal, but the results (and the eye test) show that many of the offensive woes from the past year have followed the team into the new season. The issue hasn’t really been producing opportunities, but rather it’s been capitalizing on them when they appear.

Senior forward Will Baynham tried to jumpstart the Gaucho offense to kick off the second half, sending in a strike that was easily corralled by Cal senior goalkeeper Drake Callender in the 47th minute. That would be UCSB’s last shot until the 87th minute, however, when the game was already far out of reach.

Baynham has been one of the few silver linings for the Gauchos on offense so far this season, using his big frame and surprisingly technical touch to put constant pressure on the opposing defense. The Australian forward has at the very least put in the energy and effort necessary to make things happen on the opposing team’s side of the pitch, like his game winner against UNLV in the season opener.

UCSB can only go as far as its best players take it however, and with set-piece beast and senior defender Faouzi Taieb sidelined with an injury, junior star forward Rodney Micheal has not stepped up to the plate yet.

Coming off a stellar campaign last season which put him in the conversation for best player in the conference, Micheal has not been able to produce the same magic so far in these first few games. Defenses are definitely game-planning for him now, and most teams are sending double teams as soon as he gets the ball. The great players take what the opposing team gives them and adjust, however, and whether it means trying to play off the ball more or looking to create and facilitate rather than solely attack, the Gauchos are going to need Micheal to be great if they’re going to have any chance of making it deep into the Big West Tournament.

While this result certainly wasn’t what UCSB was looking for, the tough slate of games coming up means that there’s no time to dwell on bad performances. Coach Vom Steeg selected an extremely challenging non-conference schedule for the team, including upcoming matchups against Gonzaga, Seattle University and Stanford all by the end of September.

There might be a sharp learning curve, but if the Gauchos can pull it together and compete or possibly win a few of the games coming up they should be in great shape once conference play gets underway.