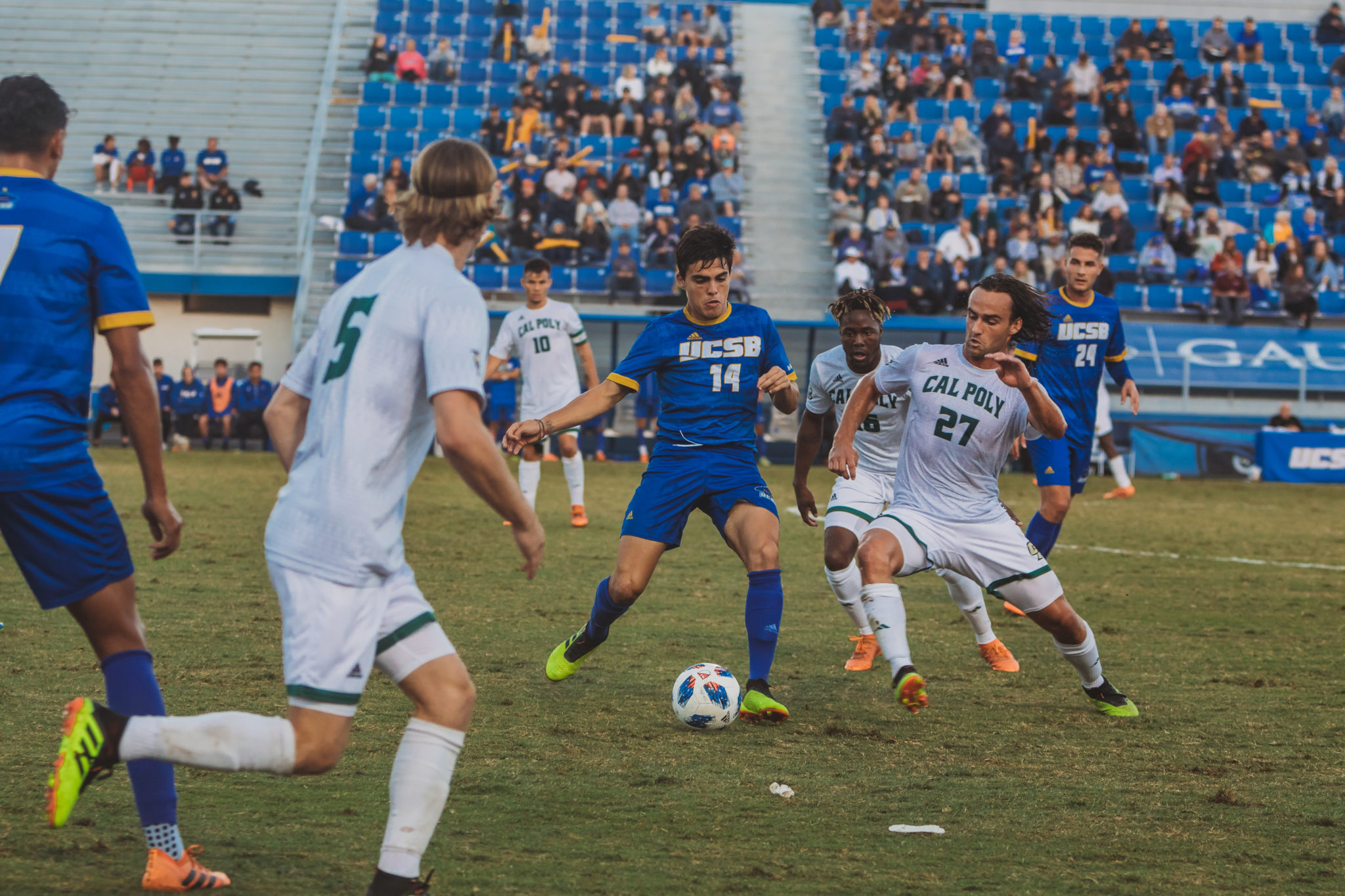 Ultimately, the victory went to the away side as a Gaucho set piece halfway through the first half granted them the go-ahead goal in a 1-0 win over the visiting Lions.

The game against the Lions also featured a couple of new faces for the Gauchos, as senior forward Will Baynham and junior forward Ameyawu Muntari made their debuts as starters for the Blue and Gold. Baynham is from Brisbane, Australia, and joined UCSB this season from Arizona’s Yavapai College. Muntari is Ghanaian and has previously played his soccer here locally as he joins the Gauchos from Santa Barbara City College.

The match began fairly even with both sides playing with intensity as they fought for possession. UCSB’s first attack came after twelve minutes as 6’5” defender Hunter Ashworth delivered a shot at goal following a corner kick.

Soon after, junior forward Rodney Michael kept the pressure on for the Gauchos as he also took a shot that sailed just left of the goal.

Minutes later, LMU responded as freshman midfielder for the Lions, Noel Caliskan, returned a shot at goal. The visiting team’s bright spot had to be their play at the middle of the pitch, as Caliskan’s midfielding partner, sophomore CJ Neville, had to be fouled twice consecutively by the Gauchos within a span of three minutes.

Then, at the 21-minute mark, UCSB capitalized on an awarded free kick as senior defender and New Zealand international Noah Billingsley netted a brilliant strike that bested the opposing keeper and brought the hosts up to a 1-0 lead in the first half of regulation.

Following this, the Gauchos’ confidence in their play seemed to increase as an accurate strike by Baynham demanded a save from LMU’s junior goalkeeper Alfredo Cortez.

The Gauchos’ first and only booking of the match went to Ashworth following a foul in the 32nd minute. A couple of off-target shots from the Lions then closed out all the action as the halftime whistle closed out the first.

Considering the match’s significance as a preseason exhibition, both teams’ head coaches called for several substitutions, prior and throughout the start of the second half of play, in order to see what their depth players had to offer.

To start things off in the second half, Michael tested the new keeper on goal, LMU sophomore Jacob Jackson, with a ball to the top right that required a save.

Although both teams shared possession, UCSB dominated the majority of attacks as Michael’s shot was followed by five more strikes from the Gauchos.

In the end, the home side’s offense couldn’t score another but the defense came to play that night as the Lions were held to only one strike in the entire second half of play; Gaucho goalkeepers were hardly tested at all as none of LMU’s shots were on-target.

UCSB had earned the 1-0 victory to close out a solid preseason with high expectations following them into the start of the regular season. In addition, UCSB just recently became the projected favorites to win the Big West Conference for the new men’s soccer season.

The Gauchos are set to kick off this year’s regular season next Friday, August 30, as UCSB hosts UNLV with a 7:30 p.m. kickoff time.

Correction [8/26]: A previous version of this story incorrectly stated that the Gauchos hosted the Lions in this exhibition matchup. The game was played at Sullivan Field in Los Angeles.

Yeah, you didn’t fully edit out this inexcusable blunder. As the match was played at LMU’s home field, “… in a 1-0 win over the visiting Lions.” is inaccurate.