The Daily Nexus
News
I.V. Artist Spreads Love of Art and Denim With Back Pocket Murals
August 25, 2019 at 9:00 am by Kailyn Kausen

Olivia “Livi” Macias, a third-year UC Santa Barbara student, first delved into painting when she was 16 years old and backpacking through Peru, Argentina and Chile with her uncle. During the trip, her uncle painted dreamy, western images of people, horses, birds and flowers with watercolors and taught Macias about eyes and emotion as well as depth and light, she said.

When he passed away due to cancer later that same year, Macias picked up watercolors and hasn’t looked back since. 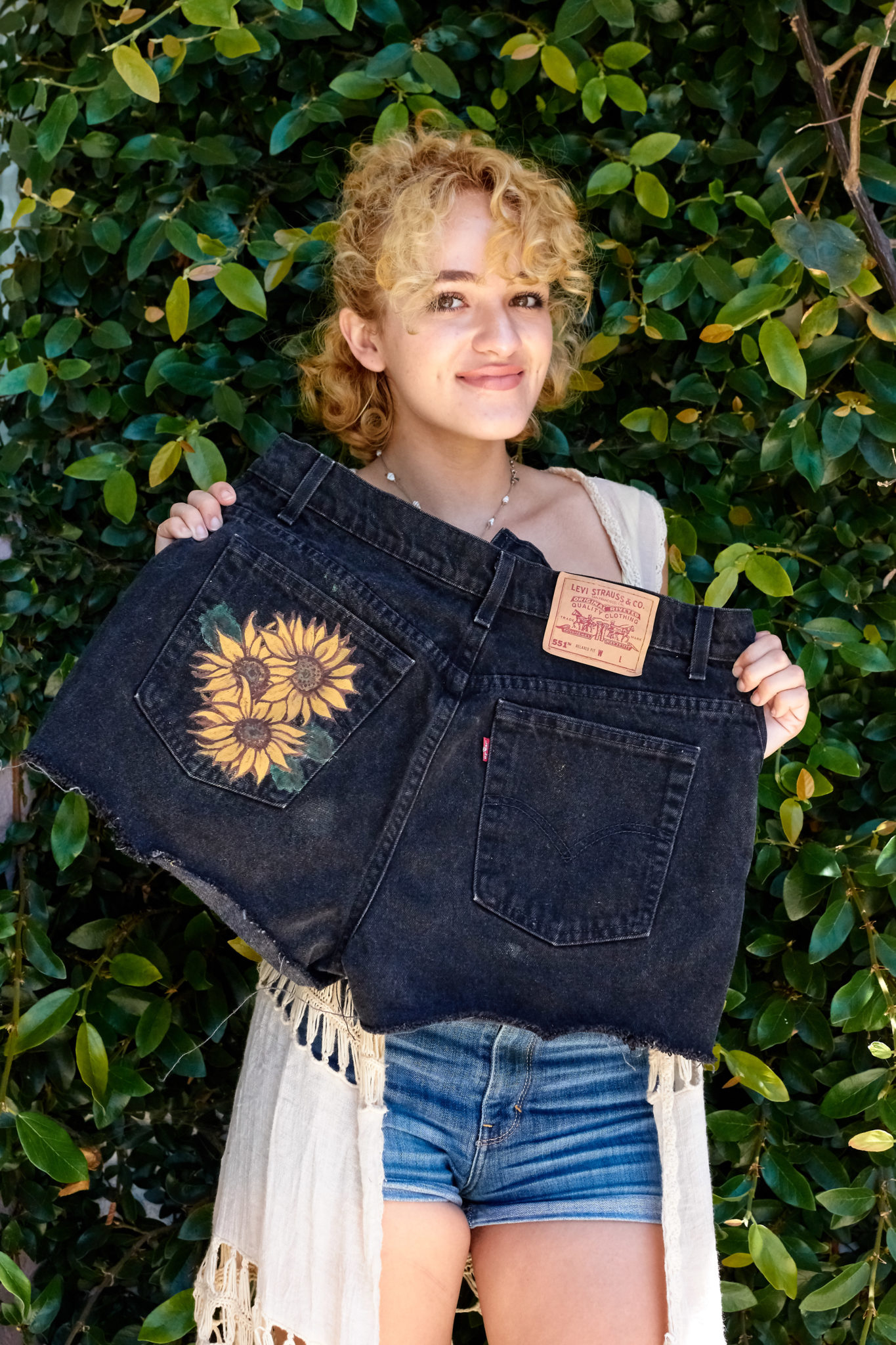 Now 20 years old and an English major, Macias has shifted from watercoloring just for herself to sharing her art with others. As a student, Macias said she believes that art is commodified and generally something people cannot enjoy unless they have excess funds to pay for expensive art.

“Just look at romance painters,” Macias said. “They were always court painters. They did portraits for royalty. They did marble statues, they painted churches, so [art] has always been a commission-based thing and it has always been commissioned by higher classes.”

This realization led Macias to research ways to share her art with the “broke college kids” around her.

In an effort to make her art more accessible, Macias puts her art on stickers, with sizes to fit Hydroflasks and lighters, and she creates poetry and art for Um…Magazine, an online student-run publication.

Macias has fallen in love with the I.V. art community and is an artist who believes even college students should be able to appreciate art.

“I think that is what I really like about I.V. art movements. It is so inclusive,” said Macias. She found UCSB to be elitist when it comes to art projects, only allowing incredibly skilled artists to produce art around campus, yet I.V. is welcoming to all skill levels.

Now, in her free time, Macias has taken up denim painting commissions – an unconventional art form not often seen in I.V. She charges between $20 and $35 for the art, depending on whether the buyer provides their own denim.

“I like painting denim, not only because it is an easy way to get my art affordably out there, but also I feel like it makes my art mobile,” Macias explained.

A friend moving to Germany in July could not take acrylic paints with her onto the plane, so she gifted them to Macias a couple months before she left. Without a canvas and disliking the look of acrylics on paper, Macias painted on denim for the first time in the spring, adding flowers to her mother’s jacket.

“[The denim jacket] was the coolest thing and it didn’t have any marks on it or anything. I had it all throughout high school,” Macias said.

She noted that painting on denim is surprisingly difficult in contrast to her familiar watercolors, which she considers to be the most forgiving medium due to water always being able to change the image.

But with denim’s rough surface, the paint needs to be combined with a mixing medium and sealed with heat to make it last through a wash, and many layers of paint are needed to produce a bright color. Macias also found that her line work needs to be more precise with acrylics than with watercolors.

Macias noticed that people were afraid to alter their own clothing but still wanted to have personalized art, which Macias said is why she chooses to create commission-based denim rather than selling original denim creations.

“Every girl has a pair of high-waisted jeans in their drawer,” Macias said. “Some of them are booty shorts, some of them are cut-off, but they all have some pair of high waisted denim shorts somewhere and it’s just like, ‘Why don’t you paint the back pocket?’”

She often encourages people to paint with her if they want to try it out.

“If you feel like you could do that or you want to do that, then sit here and try it with me at least, and if we mess up, Livi can try to fix your shorts,” said Macias.

As with Vincent van Gogh’s famous paintings “Starry Night” and “Café Terrace at Night,” Macias finds emotion to be an important part of art.

“His most beautiful works were actually made when he was in recovery,” Macias explained. She added that she is troubled by society’s romanticization of mental illness and creation and finds many believe Van Gogh and other celebrated creators would not have been as gifted or talented without their mental illnesses.

“He portrays entire emotions of happiness and hope in those just by the use of color,” she said.

Her inspiration comes from whatever she is feeling at the moment with the paper she has on hand.

Macias’ previous art pieces range across many emotions, from darker works about drug use and overdose to cuter, summer works with bright yellows and golds. She keeps various notebooks with each featuring a different theme, often with as many as twenty notebooks partially filled.

“Art is expression…and that’s what I really want to portray in what I do.”

Thanks for posting some pictures that the article is all about, Nexus. Bravo!