The Daily Nexus
News
“Power Is Found In The Community”: Santa Barbara Gathers at Vigil for Mass Shootings
August 13, 2019 at 12:10 am by Alex Bumpers

As the sun faded on the crowd gathered outside Casa de la Raza last Monday, daylight gave way to candlelight. UC Santa Barbara Chicano studies professor Ralph Armbruster-Sandoval didn’t want to be there, he said to those around him. But, as he put it, he had to be there. 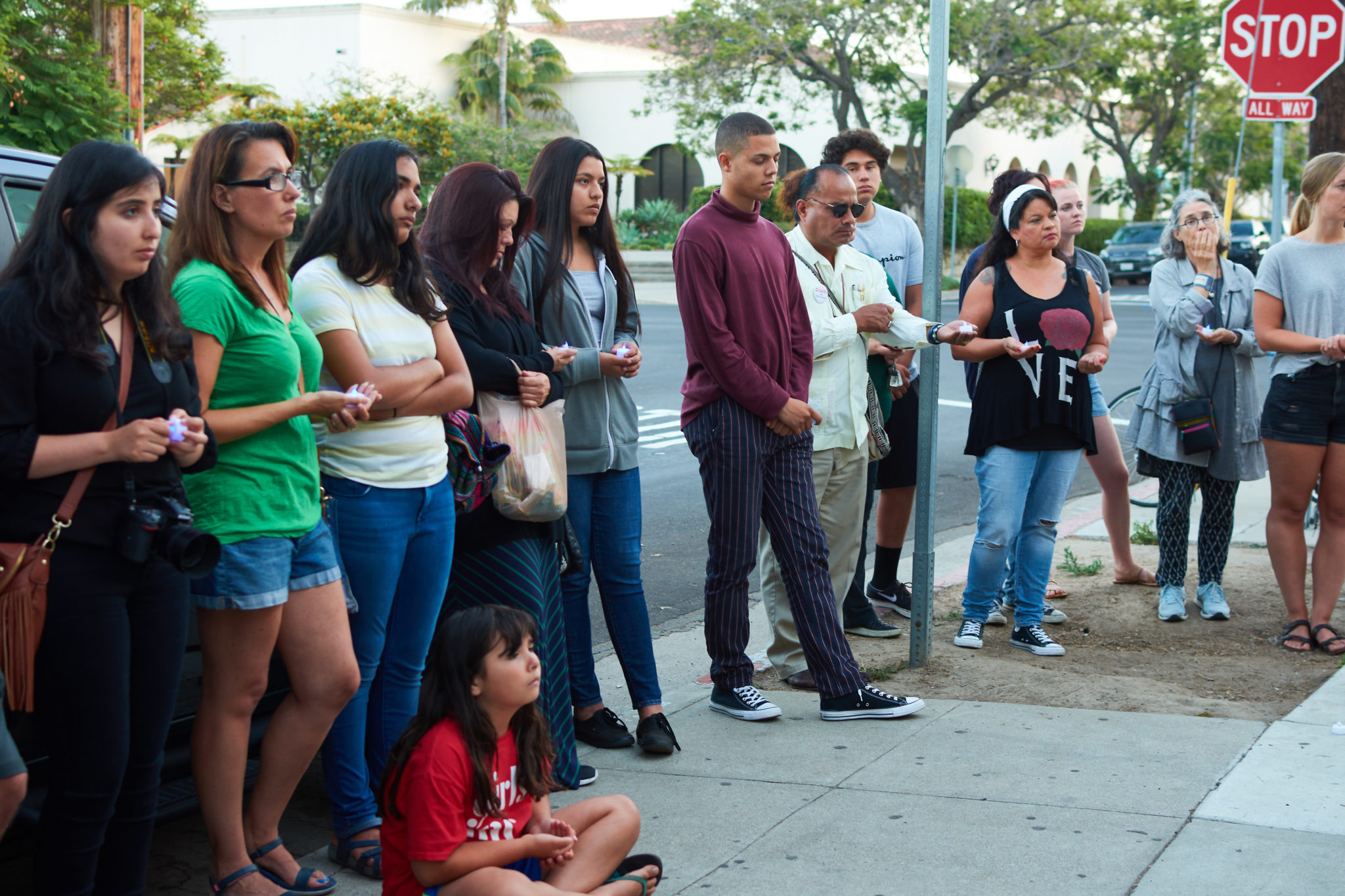 Over fifty members of the Santa Barbara community convened downtown last Monday evening to mourn those who were killed in the mass shootings in Dayton, El Paso and Gilroy. Ida Kazerani / Daily Nexus

Over fifty members of the Santa Barbara community convened downtown last Monday evening to mourn those who were killed in the mass shootings in Dayton, El Paso and Gilroy. Thirty six died and nearly one hundred were injured across the three mass shootings, which all happened within the span of a week.

The gathering was organized over Facebook by Armbruster-Sandoval and Amanda Pinheiro, a graduate student in the UCSB Global Studies department, less than 24 hours earlier.

Marcus Lopez, a local activist and Chumash native, opened the vigil with a blessing and performed a native healing song.

Attendees were invited to step forward and speak their minds. Most messages centered around community and a common humanity.

“I believe that power is found in the community,” one attendee said. “We must stand together as a community. It is the answer. We must demand from politicians the responsibility to act. When we get there, we’ll be back as humans together.”

“There are no agendas here tonight other than the human agenda,” another gatherer said, alluding to the political nature of the debate that has sparked across the country in response to the three shootings.

The shooter admitted to “targeting Mexicans” and, in his manifesto, wrote that the “attack is a response to the Hispanic invasion of Texas.”

President Donald Trump, who has referred to the northern migration of asylum seekers from Latin America as an “invasion,” has been criticized this week for similarities between his words and those of the shooter.

“The rhetoric that’s coming out of the White House right now is really disturbing,” Campobello said. “Now, are we going to have to be afraid to be brown and go to Walmart?”

Campobello, who is also a professional muralist, musician and descendent of the Yaqui and Huichol tribes, performed a song on the Native American flute.

“Music gets past the mind,” he said. “Language kind of gets stuck, even if the words have certain meanings. Music and melodies… get into the heart space. And as that space can open up, we can tap into a field of love. And that is what we really need right now.”

Others reflected on their hope for future action to prevent such tragedies.

“I see an awakening,” said Campobello. “People are less able to remain complacent and are being called to action because things have been so bad. That’s where I see hope.”