The Daily Nexus
Music
Great Outdoors, Greater Music — 9 Songs for Your Next Trip to the Mountains
July 27, 2019 at 1:38 pm by Hannah George 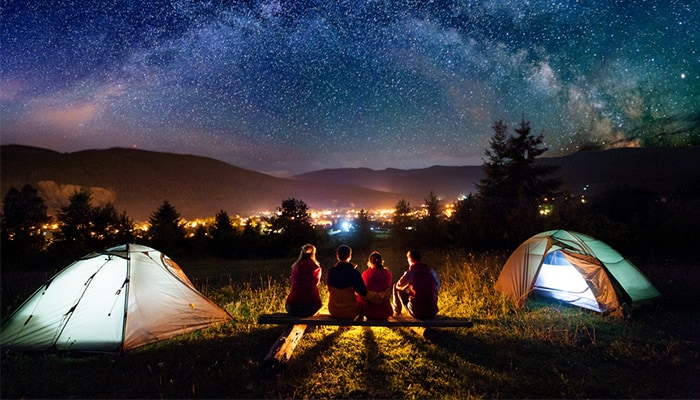 As midsummer rapidly approaches, the itch to escape normal life and venture into the unknown consumes the minds of the average, bored young adult. While the surrounding town of UC Santa Barbara embodies a fair amount of isolation and nature, there is nothing quite as satisfying as the aroma of fresh mountain air and miles of shrubbery to get lost in. If you’ve already been lucky enough to reach a campground this summer (or really, ever), you would know that the one friend who tells the same dramatic story for the 16th time just doesn’t cut it anymore on your journey to full immersion with the great outdoors. And that is OK — an entire playlist filled with both nostalgic and contemporary songs can accompany your next camping trip, whether it be in a luxurious cabin, worn-with-love tent or just plain passed out under the stars. So grab your gear and a 30-rack because the mountains won’t be the only thing that’s rockin’.

As an avid instagrammer would say about any song before the turn of the century, this one is “an oldie, but a goodie.” Chalked with country tune, your whole crew can sing along about the “country roads” and “mountain mamas.” Not only is it perfect for playing at the final destination, it also pairs well with the sickeningly winding drive.

This recent alternative beat has all the right reasons to come along with you on your forest adventure. Catchy and cute, everyone will be asking to keep this song on replay. In fact, it really speaks to how the group will be feeling after four hours without cell service — bored, probably.

Although technically considered a rap song, Tyler’s creation contains escapist beats that will help you and the crew lose track of time staring off into miles of trees and oblivion. With no lyrics to focus on, the relaxation sets in and allows you to think deeply. Would a camping trip really be successful if no one came back with deep philosophical quandaries and a detest for human noise pollution? Add this one to your playlist and let the unwinding begin.

Sure, this song is over thirty years old and also about a guy getting cheated on, but that’s besides the point. This rock classic pairs well with any mountain activity — from fishing to fantasizing about city life. Not only will everyone know the lyrics, but the title itself is awfully fitting for all the bonfires the group will light up. Gather ‘round the campfire, and sing these campfire songs!

From the up-and-coming artist Dominic Fike, “3 Nights” has an upbeat rhythm that accompanies all the exciting camping activities you’ll indulge in (i.e., throwing a frisbee or rock-collecting). Its catchy tune acceptably fits among the myriad of slower tracks on this playlist. With lyrics about the city, you won’t feel so far away from the street lights.

Recorded in the ripe year of 1975, Starbuck still reigns and is prepared to join you on your astral haven. Whether you’re stargazing, as the song suggests, or dead asleep from the day’s festivities, this relaxing, romantic ballad partners well with the cozier nights every camping trip is known for.

Sam’s most recent single, with an electric pop feel, will make you want to climb out of your sleeping bag and dance beneath the trees. Or maybe it’ll lull you into hibernation like the bears. Either way, this smooth, modern track adds to the diversity of your camping playlist. And it might make you ask yourself, “How am I sleeping?,” with a rock jamming into your back and the group’s chronic snorer right next to you.

It’s no surprise Daniel Caesar’s second album blew up. Adding this personal song to the list anticipates all the late-night talks everyone will be having during the many days spent together in close quarters. In fact, if you haven’t checked out his new album already, add the entire thing to the playlist. It won’t disappoint.

Yet another throwback to polish off this list for your rocky mountain high. After days — or possibly weeks — with the same eager crew, you’ll be saying “home is wherever I’m with you!,” whether that’s a good or bad thing. Make sure to play this catchy number on the way down the mountain to invoke maximum tears and infinite forest-filled memories.