A suspected drunk driver in a black Nissan Altima rammed into a house and several cars on the 67 block of Del Playa Drive in Isla Vista on Friday night, damaging a water and gas line, destroying a fence and causing minor injuries to a nearby resident.

The incident began between 9 and 9:30 p.m. at the parking lot of 6761 Del Playa Drive, when two residents of the property confronted the man with allegations of stalking, according to Nadine Karmalawy, a neighbor who witnessed the incident.

Karmalawy told the Nexus that the man had been stalking her and other members of the house in the days before the incident.

The suspect, who was allegedly drunk, “got physical” and “pushed [one of the house’s residents] to the floor.” He then got into his car, “started doing donuts in our parking lot” and hit a resident of the house next door, Karmalawy said.

The resident received minor injuries but was not taken to the hospital, according to Santa Barbara Fire spokesperson Daniel Bertucelli.

Karmalawy and her housemates could not identify the suspect.

“He just hit [the neighbor] and then kept backing out and coming back in and trying to hit people, hit all the cars in the parking lot and smashed [the cars],” Karmalawy said.

The driver hit at least four cars, according to Nexus reporters at the scene. One car’s back taillights had been completely shattered, while another had minor scratches. Two separate cars had also been slammed into each other.

The suspect also rammed into the house next to the parking lot, 6769 Del Playa Drive, damaging the fence, gas and water lines, rendering the house “uninhabitable” and leaving the 12 residents without housing, Bertucelli said.

Anthony Ashkar, a resident of 6769 Del Playa Drive, said he and his housemates had been “chilling in the living room” when they heard a “loud thud in the house.”

“We looked in the hallway, and it was completely just caved in,” Ashkar said. “My roommate started bouncing the fence, trying to get the guy that crashed into the house.”

Ashkar confirmed that the residents are without housing for several days because “it would take a few days to get [the house] back into shape.”

The car’s bumper and license plate had fallen off and were left at the scene, Ashkar said. 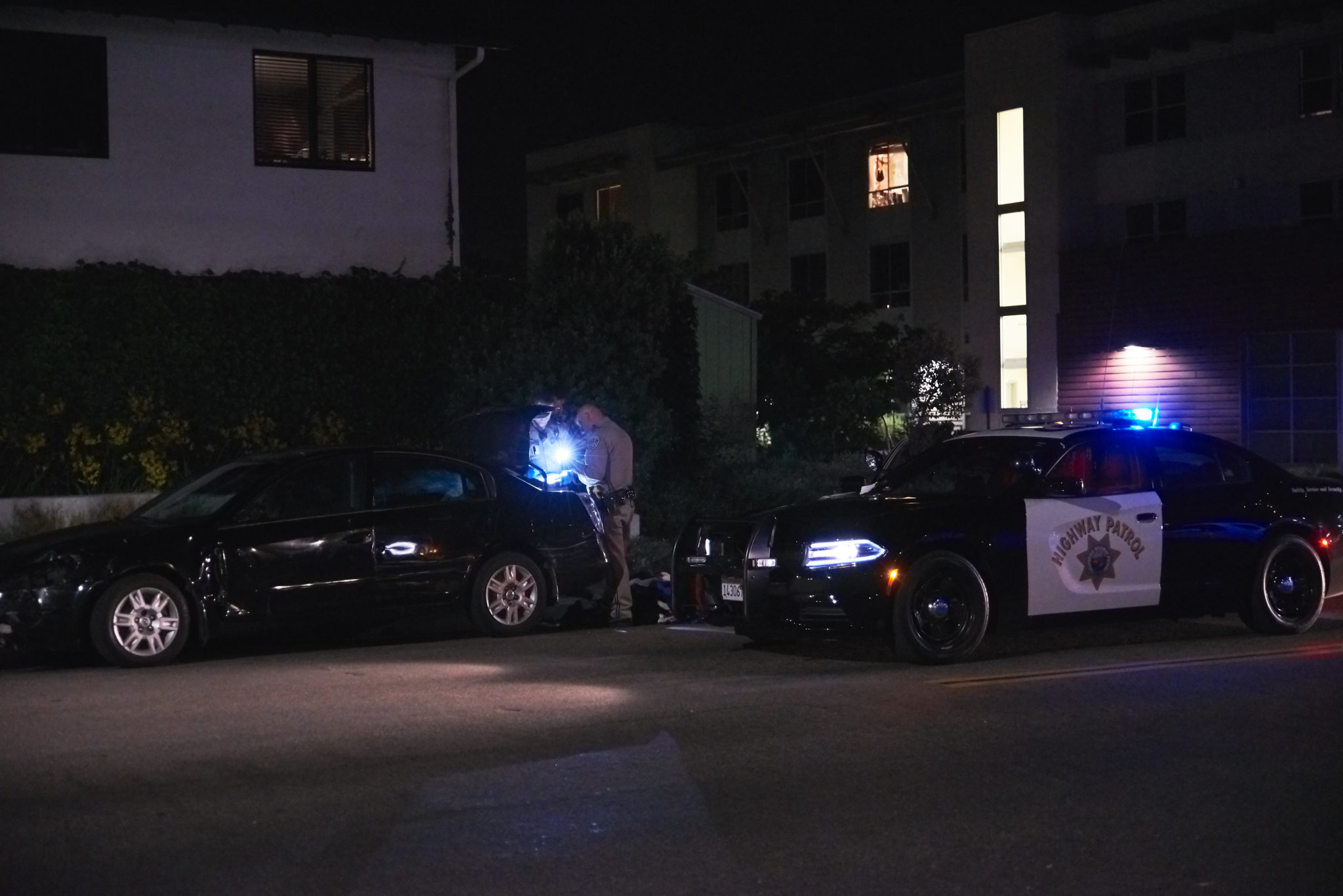 The car was found abandoned by the corner of Camino Pescadero and El Greco Road. Siavash Ghadiri / Daily Nexus

Police officers found the car abandoned by the corner of Camino Pescadero and El Greco Road around 9:50 p.m., according to Nexus reporters at the scene. After checking inside for the suspect, the officers called a tow truck and forced open the car doors and trunk.

At least five officers on the scene searched the inside of the car and the trunk for about an hour while canvassing the nearby area for the suspect. An officer on the scene confirmed that the suspect was male and that the black car found on Camino Pescadero was the driver’s car.

There was visible damage to the front, back and sides of the car. In addition to the missing front bumper, there were sizable dents visible and large scratches on the left side and back of the car.

The car was towed at approximately 11:10 p.m. after officers finished searching it.