There is no precedent for UC Santa Barbara’s Promise Scholars Program.

A “combination of monetary support and then wraparound services,” the program, the first of its kind in the nation, strives to give low-income students resources and guidance to help them graduate in four years with minimal debt, Program Director Holly Roose said.

This year, the program graduated its first class of students. 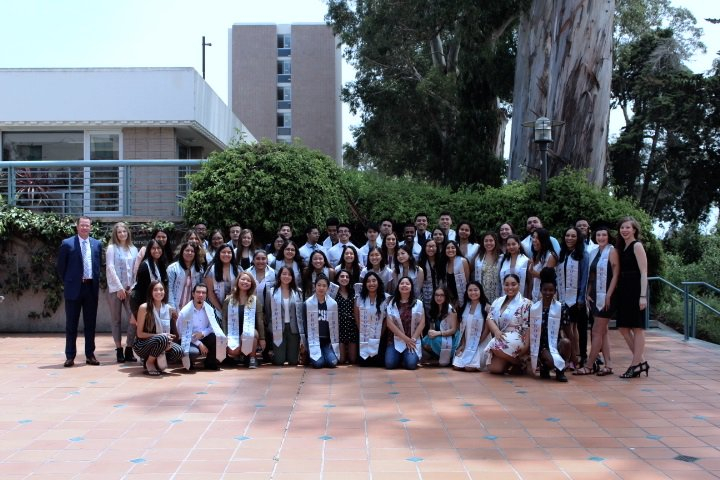 The program graduated its first class of students this past weekend. Courtesy of Lyna Nguyen

Mike Miller, former director for the Office of Financial Aid and Scholarships and current assistant vice chancellor for enrollment services, created the program after years of meeting with parents of low-income students and not being able to offer them four-year payment solutions, Roose said.

On the condition that the Promise Scholar students remain Cal Grant– and Pell Grant-eligible through their four years of college, they are guaranteed $120,000 in grants and scholarships when they first come to UCSB from the federal, state and institutional level.

The program requires students to sign contracts agreeing to maintain a 2.75 GPA upon arrival to UCSB, file their taxes on time, complete their FAFSA on time and take a handful of mandatory classes and workshops throughout their time at the university.

They also have to agree to fill out surveys during and after their time at UCSB to help with the “continued funding and success” of the program, according to the program’s website.

In addition to the financial support, the program provides students with what Roose calls “wraparound services,” which include counseling and one-on-one support.

The program initially included only monetary aid when it was first started in 2015, but when Roose arrived in June 2016, it grew to include additional services.

“I think Mike Miller, who started the program, realized very quickly that you can’t just give low-income, first-generation, underrepresented students money and be like, ‘Here, go to college,’ and expect them to be able to survive,” Roose said.

Roose worked in the McNair Scholars Program at San Diego State before coming to UCSB, and said she drew from her experience there, particularly with programming, to help build the Promise Scholars Program into what it is today.

Roose operates as a resource for students to go to with any problems and even keeps stacks of business cards for various UCSB entities on her desk so she can easily direct students to the services they need.

But with a small staff, Roose said it is difficult for her and her two part-time assistants to serve the needs of all 428 students in the program, especially since they have a policy of never turning a student away.

Roose also recently started a mini-Promise Scholars Program with Joe O’Brien, assistant dean of the College of Letters & Science Advising, in the form of INT 10: “Transitioning to Academic Excellence,” a course “to help students get acclimated to the university and to help build them a safety net,” Roose said.

Additionally, Roose runs a Scholar Retention Program, also created by Miller, to allow students who are academically disqualified and lose their financial aid to return during the summer and take classes. If they receive two B’s during their summer classes, they are able to get back into school, Roose said.

However, these various initiatives require more hours, and a larger staff would help Roose maintain these programs, serve the current cohort of Promise Scholars and expand the program to benefit as many students as possible, she said.

“Once the students are admitted to UCSB, we just cull the most extreme low-income from that group and then we just narrow it down from there based on grades in high school and how promising of a student we think they’re gonna be,” Roose said about the selection process.

“We just don’t have enough money to bring in every low-income student. Otherwise we would.”

Roose believes that college should be free for everybody and hopes the Promise Scholars Program expands to the rest of the state.

“UC Merced has already picked up this program, and they’ve started offering their students Promise Scholars opportunities,” she said. “And I think Berkeley is considering picking it up. So it would be nice if we could get this program everywhere.”

But for now, Roose is taking a minute to celebrate the accomplishments of this first graduating class.

“We have students that were admitted into USC, into Harvard, into Duke, UPenn, Michigan State and UCSB Ph.D. programs and Master’s programs. And then we have some that are going to be going directly into industries,” she said.

For Roose, the best part of the program is being a part of the journey her students undergo in college.

Lyna Nguyen, a Promise Scholars student and linguistics major who graduated this past weekend, said that without the program, “I may not have had a college career at all.”

“Coming from a single parent household, there was no way I could’ve afforded an education at UCSB without getting myself into a ridiculous amount of debt,” Nguyen said in an email. 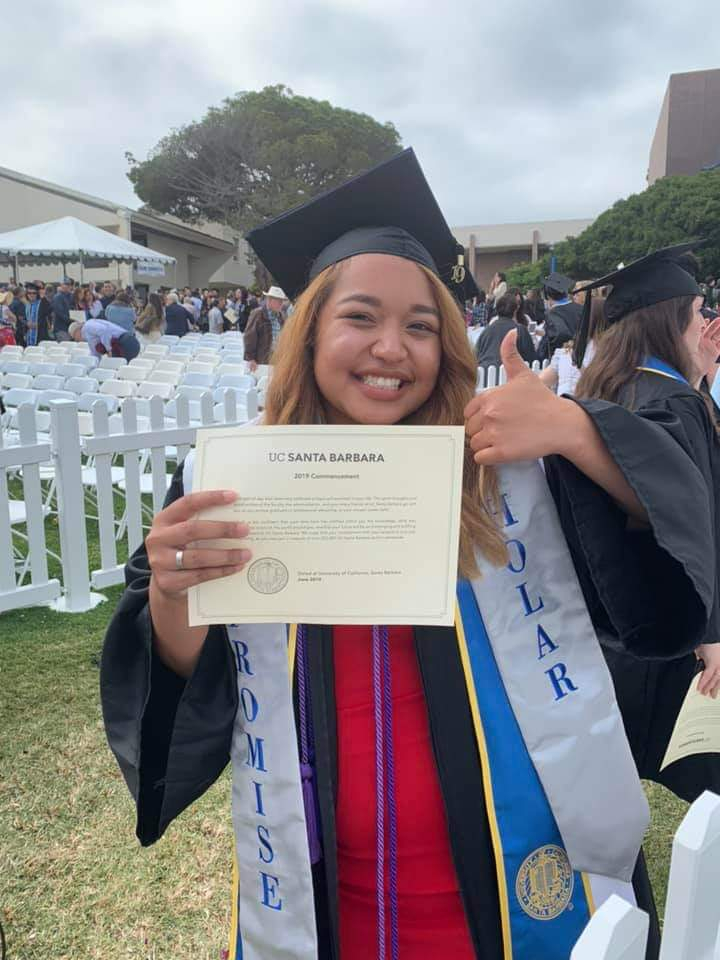 Nguyen is part of the first graduating class from the Promise Scholars Program. Courtesy of Lyna Nguyen

As part of the first graduating class, Nguyen has seen the program grow and take shape as Roose and Miller figured out what worked best for the students.

“Over the last four years, I’ve watched the program grow into stable home for students like me. I say “home” because it truly has become a place where students can find mentors who are like older siblings, staff who care like parents, and friends who understand your at-home life better than anyone else you could find at UCSB,” Nguyen said.

“It started out as a baby program with a handful of students and is now a campus entity with [its] own organization.”

Nguyen called the Promise Scholars Program “one of the best things” that has ever happened to her.

“A lot of people were brought into college and left to fend for themselves. But when I was at my lowest and drowning, Promise Scholars didn’t abandon me. Quite the opposite; they never left my side. They reached out, and helped me get my life together,” she wrote.

“This program didn’t just throw money at us and say “here, graduate.” They provided us with skills for the future, and people we can always go back to for help. The Promise Scholars Program helps students like me have a fighting chance in college, and be successful afterwards.”

“I have a lot of pride in being the first group to graduate, because–although this sounds dramatic–I feel like we paved the way for future Promise Scholars.”