“When I saw him on DP, I needed to get a pic with him just to flex. He’s rare,” Eric, a third-year student at UC Santa Barbara, said. Eric slides his iPhone from the back pocket of his tight blue jeans and pulls up his Instagram profile before I even have time to ask.

In the photo stands Eric. His unbuttoned shirt billows in the light breeze as his arms extend around his four best friends who sport ripped denim shorts, floral crop tops and wire-rimmed aviators that reflect the shining sun. The well-dressed group stands still and smiles while masses of inebriated UCSB students stagger down Del Playa Drive (DP) to the next EDM banging dayger. Their inertia amidst the revelry proves worth it: Eric gains the privilege of captioning his Instagram photo “Daddy Yang came to play #Deltopia2019.” 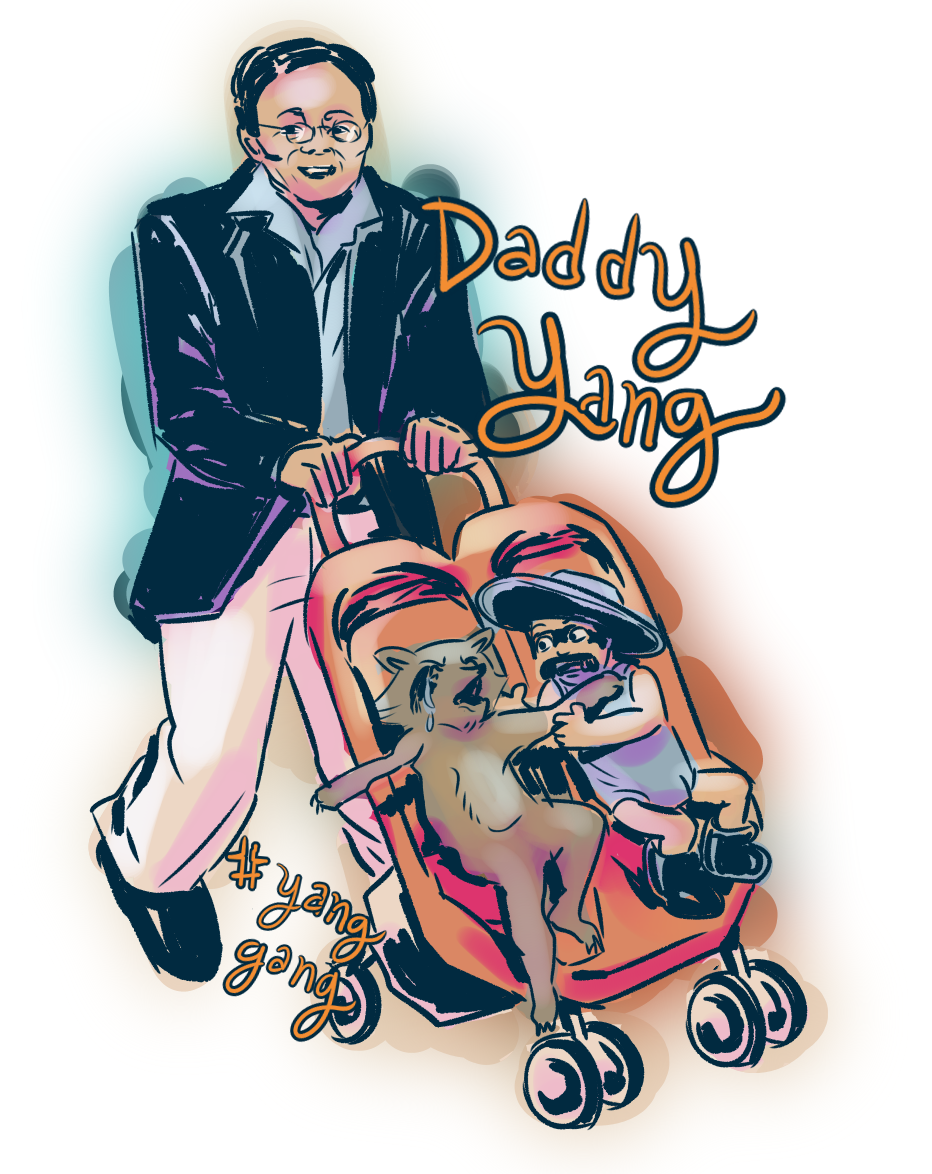 UCSB’s Chancellor Yang (colloquially nicknamed “Daddy Yang”) and his equally esteemed wife, Dilling, are known for making appearances at annual Isla Vista festivities such as Deltopia. In fact, The Daily Nexus maintains a yearly tradition called the “walk-along with Chancellor Yang” to capture his journey through the lively streets of Isla Vista on Halloween. In a 2010 video uploaded to YouTube, Chancellor Yang can be seen entering a student party as invited by a hostess dressed as a 1970s flower child joyously slurring, “Mr. Chancellor, welcome to our house. We are so happy to have you.” Inside the party, the Chancellor poses for photographs beside jungle explorers and Greek goddesses, sucks on a red lollipop and high fives the students in the cramped living room who chant “Chancellor Yang! Chancellor Yang!” while trying not to spill their Keystone Lights on his shiny black shoes.

Nearly a decade later, Chancellor Yang poses with the same kind-eyed grin for his photo with Eric. While undoubtedly lovely, the photo is not unique. Hundreds of UCSB students have snapped “Yang Gang” group shots amidst the festivities; it’s a phenomenon that stretches back far before Eric’s time as a Gaucho. Thus, Eric may be disappointed to discover that his prized snapshot with Chancellor Yang is not nearly as “flexworthy” as he assumed.

The role of the chancellor is one of critical importance. According to UC Santa Barbara administration, “the Chancellor guides UC Santa Barbara in its research, teaching and service mission, shaping the university’s direction and long-term strategy.” The chancellor is responsible for a multi-million-dollar budget. He represents the thousands of staff members, faculty and students who pass through the doors of the university each year. He serves as a liaison to the broader community, across the University of California and nationwide. Eric equates the chancellor to the captain of a ship. “If the school goes down, he’ll go down with us.”

Such a position is not easy to fill. In fact, it took UCSB seven months of searching and consideration of over 150 applicants before naming Henry T. Yang as UC Santa Barbara’s fifth chancellor in 1994. The completion of this academic year will mark his 25th year of service to the university.

With so much responsibility and experience serving UCSB, it’s no surprise that students recognize Chancellor Yang’s distinguished value to the university. Eric explains, “His status and fame come from his title. Everybody wants a selfie with their favorite celebrity.”

Although celebrities often shy away from the camera when spotted in public spheres, Chancellor Yang actually enjoys posing with his fans. In an email conversation, he revealed to me, “A quick selfie and a little conversation give students and me happy memories of their college life. It also gives me a feeling of being closer to the real lives of our students.”

Whether through taking photos with drunk students or subjecting oneself to subpar dining commons stir-fried dishes, the ability to connect with students proves to be a chancellor’s most redeeming quality.

In recent years, Chancellor Yang’s stardom has grown from being a hot commodity for photo ops to starring as the face of merchandise. The UCSB American Marketing Association is selling “Daddy Yang” shot glasses marketed as a vehicle for students to commemorate their “legendary chancellor, the all mighty Yang!” Island View Outfitters, a collegiate licensed vendor based in Isla Vista, offers tank tops featuring the chancellor sporting a 19th century military uniform — fringed epaulettes and all — with the subhead “Chancellor Yang: Beloved Hero.” All the while, multiple vendors are selling a variety of “Daddy Yang” stickers.

Notably, students at other universities also meme their chancellor on Facebook, yet principally in a belittling sense.  UC Berkeley Memes for Edgy Teens features edits of Chancellor Carol Christ serving students ‘L’s’ in the dining commons. The face of Chancellor Pradeep K. Khosla can be found photoshopped onto bowls of soggy coleslaw in UCSD Memes for Sleep Deprived Teens.

As evidenced online, UC students have a lot to say about their chancellors. Yet many students are in fact clueless about the true nature of a chancellor’s role.

“I just get the impression that he’s a good guy, although I don’t really know what he does,” Eric confesses. He is not alone in his oblivion. In April of 2018, UCSB student Vianna Mabanag published a satirical social commentary in the Daily Nexus entitled “I Don’t Know What Chancellor Yang Does Exactly and at This Point I’m Too Afraid to Ask.” This relatable voice speaks to how the majority of UCSB students haven’t the slightest idea of what their chancellor does beyond “important things that require the title of Chancellor.”

“My wife, Dilling, and I enjoy walking around campus as a way to meet our students and get a real feel for the life of our university. We spend time talking with our students and sharing meals with them in our dining commons,” Chancellor Yang expressed in his email to me. “These interactions are one of the greatest joys of being chancellor.”

These subtle notions go a long way with students.

“When I first got to UCSB, I felt really alone in this giant school. But after seeing the chancellor in [the De La Guerra dining commons] just spending quality time with students, I knew he really cared about us. I knew I was in good hands,” Eric said.

To some, it might seem problematic that UCSB students are so obsessed with a man whose position and expertise they can hardly identify. After all, they devote more attention to his well-groomed comb-over than his experience serving as an advisor for NASA. Yet this ignorance is not necessarily a bad thing; it points to the true qualities necessary to lead a world-class research university. Whether through taking photos with drunk students or subjecting oneself to subpar dining commons stir-fried dishes, the ability to connect with students proves to be a chancellor’s most redeeming quality.

As Eric collects his phone from the table, he gazes again at the prized photograph. With a sigh of contentment, he professes, “Meeting Chancellor Yang is like seeing a unicorn in a forest. It’s rare, magical, mysterious.”

Miya Herzstein knows that not all chancellors can be “daddies” but encourages them to strive to be something of the sort.