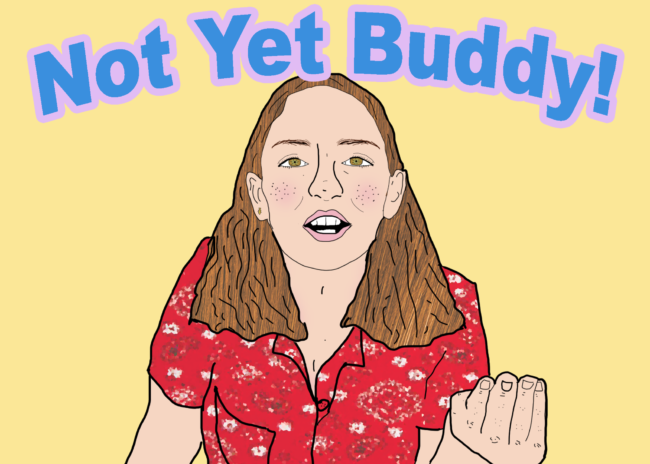 Let me set the scene. It’s a Saturday night, and you head over to a DIY band show in your friend’s garage. You meet up with some buds who are all wearing typical indie scene ’fits, complete with flannels and baggy cuffed pants.

There’s this cute guy across the garage, who clearly thinks that making eye contact with you twice counts as shooting his shot. You decide to play along, though, as he makes his way over to you through the crowd. He reaches one of your friends and starts talking to them about the class they had together last quarter. Your friends see the way you’re both ogling each other, so they leave you to get to talking.

He’s cute and funny and charming. You laugh as he tries to flex the fact that his roommate is the drummer in the band. He suggestively compliments the little flower that is painted onto your back pant pocket. The band starts to play “Isla Vista” for the third time, but you’re dancing with him and feeling it. You catch your friends giving you a thumbs up out of the corner of your eye.

As midnight nears, you walk in the street with him as he suggests that you could come back to his place, which is a block or two away. He plays it off as if he simply doesn’t want you to have to walk all the way home. You don’t mind even a little bit.

He lives in a house with all male roommates, who look at you with jealousy as their boy brings you back to his room. Everything feels exciting and spontaneous, and you know exactly where this night is headed. It feels good to be intoxicated and sweaty and wanted for the night.

There’s this awkward moment, as you both sit on his bed, but he quickly asks if he can kiss you and you say yes. The next moment you’re tangled up in his sheets, while he’s kissing you hot and heavy. Even though he tastes like cigarettes and bad beer, he’s still a good kisser. As the make-out session really ramps up, the clothes come off, and he’s consistently asking if you’re okay at every step.

Then all of a sudden, he puts his hand around your neck and starts to squeeze. You open your eyes immediately because you’re so caught off guard. You’re not sure if he can feel the fact that you froze, but he eventually takes his hand off your neck. Throughout the night, he hadn’t given you any reason to think he would be “that guy,” as he asked for consent religiously. But in that moment, you’re rightfully afraid and scared for your safety

Choking can be a nice form of breath play that really spices up a sexual encounter, but it should happen with clear and informed consent.

At first, I thought encounters like these were one-off experiences and I felt responsible for getting myself into these situations. My internal slut-shaming voice chimed in to remind me that I deserved this for how free and casual I was about going home with this guy. Back in the guy’s room, I dismissed the terror I felt, justifying it by telling myself that it was fine because choking has become such a common kink, and he had been respectful during the lead up to that act.

Eventually I opened up to my friends about the several times that I have experienced this, and, unfortunately, they echoed my sentiment, saying that they had also experienced people choking them during first-time casual hookups. When I was removed from the heat of the moment, it struck me how truly messed up it is that we’ve had virtual strangers perform such a violent act without any consent.

Beyond how incredibly violated I felt, choking can also be really dangerous for people with any sort of breathing or heart problems, especially when it’s so unexpectedly coming from some dude you just met.

I want to be clear that I’m not trying to kink shame anyone. I like being choked just as much as the next slightly submissive kinkster. But you’re engaging in a really scary and vulnerable act when you allow yourself to be choked. I’m not going to trust just anyone to physically take away my blood or air supply, especially when I literally just met them.

Choking can be a nice form of breath play that really spices up a sexual encounter, but it should happen with clear and informed consent. I’ve had much better sexual encounters where a guy has put his hand gently on my neck and asked if that was okay. Although this consent is required, it felt really comfortable and excited for someone to respect me in the way I deserve to be respected.

Just as consent needs to be considered at every level of a sexual escapade, choking should be thought of as an act that requires explicit consent. It’s surprisingly easy to get consent and ensure that everyone leaves feeling safe and sexy. Politely asking for that permission doesn’t ruin the power dynamics inherent to choking. Instead, it shows that you are deserving of having that person submit to you in that way.

So next time you want to get a little kinky with someone you’ve just met remember that choking shouldn’t be taken so lightly and, most importantly, it requires thorough consent. Or better yet, maybe wait for you and your partner to have a little more experience together before pulling the, “Choke me, Daddy” bit.

Eloise Scott keeps her standards low but not when it comes to her sexual safety.