The Daily Nexus
News
Pay-What-You-Can Photography Event Inspires Other Students To Give Back
June 6, 2019 at 12:02 am by Sanya Kamidi

Henley Gate is synonymous with graduation photos. Dressed in their gowns, students flock to the scenic location to celebrate their years attending UC Santa Barbara. 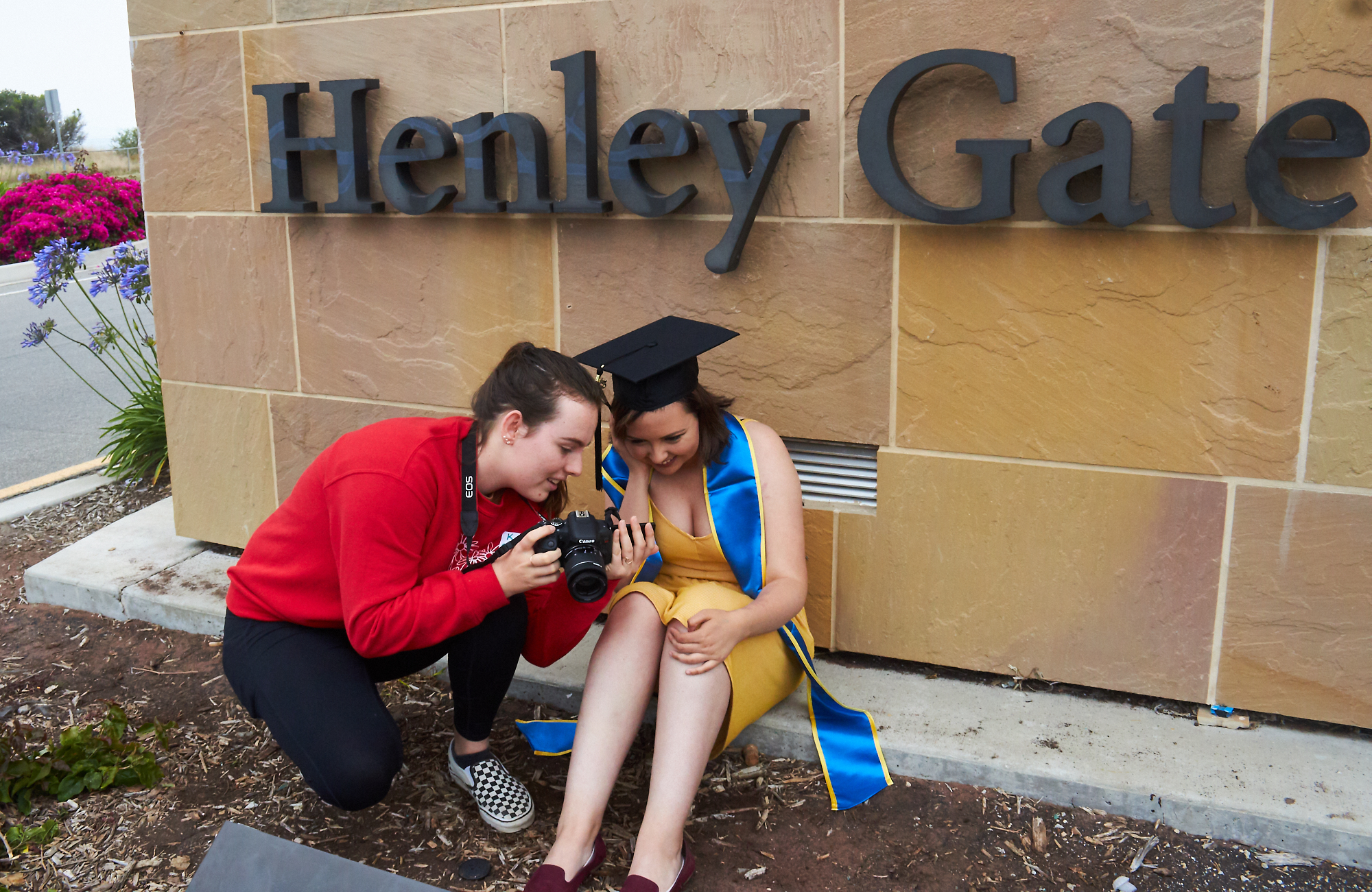 Alejandra Gularte, one of the students who attended the event to have her photos taken, said she appreciated the event’s impact on both graduating students and photographers. Sanya Kamidi / Daily Nexus

But oftentimes these graduation photos can cost several hundred dollars, an expense many students can’t swing alongside rent, tuition and basic needs.

Morrison was first inspired to host this event after hearing some of her friends talk about the prices that other photographers were charging.

“As someone who does art for a living for some of my jobs, I totally understand you gotta pay for it. But I have friends struggling for rent, struggling for tuition. I can’t imagine an added fee,” she said.

It was the desire to strike a good balance between paying artists for their art and making grad photos as accessible as possible that led her to create the event.

Morrison was initially going to stake out by Henley Gate alone, but then she decided to post on Facebook about her idea to get more photographers for the event. Once she had heard back from a handful of people, she set up a group chat for everyone to schedule themselves for shifts.

Niko Van Eimeren, one of the photographers at the event, said she signed up to help because she personally understood the struggle graduating students face when paying for end-of-the-year expenses.

As a fourth-year environmental studies major, Van Eimeren said she herself wasn’t sure if she was going to get her graduation photos taken.

“[For] a lot of my friends, I took their photos for them at a discounted rate ‘cause I know that it can be really expensive,” Van Eimeren said.

Alejandra Gularte, one of the students who attended the event to have her photos taken, said she appreciated the event’s impact on both graduating students and photographers.

“I found it was a way to help smaller photographers that maybe wanted to get practice. But also, for me, it’s cheaper, because I pay a lot of money for school,” Gularte said.

Morrison gives all the credit for the event to the photographers who signed up to help.

“This was only possible because people were volunteering their time to do their photos,” she said.

“Photography isn’t always something you’d think would be something you could do to help people,” Morrison said.  “Anyone can really do something like this, stuff like this means a lot to people.”

She also noted that as a graduating student, it can be difficult to see all of your friends posting their photos and not be able to afford them yourself.

“Having a good grad photo to give to their mom — it’s like a small thing in your day, but honestly would make someone’s day,” she said. “If you can, take time out of your personal life to do a nice thing once in a while.”

Second-year art major Reannah Viray took inspiration from that idea and put her own twist on it. 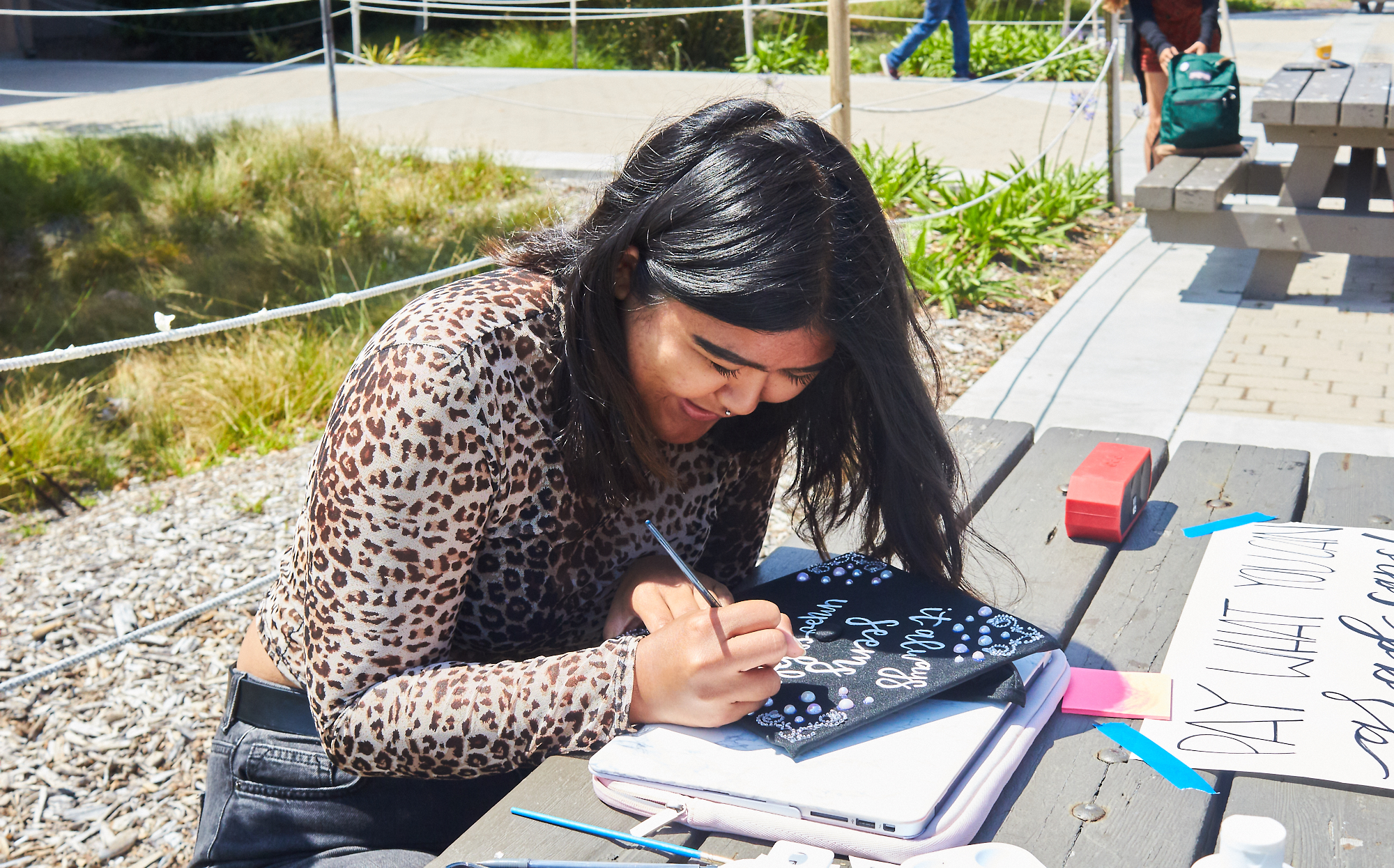 Viray usually paints graduation caps for other students for a base fee of $30 with an added $5 for each extra detail, so she said she understood why students often opted to not get them done. Sanya Kamidi / Daily Nexus

Viray hosted her own pay-what-you-can event for graduating seniors on Wednesday in the Arbor, offering her art services to anyone who wanted their cap decorated.

“I was a photographer in high school, so I wish that I could have participated, but I didn’t know how to until it was over, so I was like, ‘what other way can I spare my time to people who don’t have the resources or the income necessarily to get grad caps done?’” Viray said.

Viray usually paints graduation caps for other students for a base fee of $30 with an added $5 for each extra detail, so she said she understood why students often opted to not get them done.

Morrison said she thought Viray’s event was “really sweet” and said she was glad to see other students being inspired by her own event.

“I think it goes to show that you can make a difference with whatever skills you have,” she said. “We can just make a week of pay-what-you-can services.”

A version of this article appeared on page 5 of the June 6, 2019 edition of the Daily Nexus.

Students have access to modern equipment, which is of high quality and regularly updated. They practice on gear commonly used by professionals.students can also learn photography and work like a professional while reducing cost and this method will give them opportunity to make money and save for college without depending on student loan. tinyurl.com/y6czwzf4